Is it safe to video record the sun with a DSLR with a solar filter? [closed]

This question is about video in a context that is not likely to be relevant to still photography.

I've read so far that taking photos of the sun with a DSLR is ok with a sun filter.

I'm wondering, is it safe to take videos of the sun with a solar filter on a DSLR?

Yes. But before I get into it, let's cover some safety stuff. As an astronomer and NASA/JPL Solar System Ambassador ... I never talk about looking at the Sun without talking about safety (cause you can really mess yourself up).

It is NOT OK to stare at the Sun. This results in an effect similar to getting a bad sunburn ... but on your retina. And like a sunburn, you don't immediately realize it happened ... it's typically many hours later (and could be as much as two days later). Unlike a sunburn ... it doesn't necessarily just get better (professional medical care is required and the damage may not reversible.)

Also, normally the solar filter needs to be on the front of the lens (or telescope) to be safe. I mention this because there are lenses where filters can be attached at the rear. So unless you know the equipment can handle it, assume it cannot handle it.

I have a telescope that I can equip with a device called a Herschel Wedge. This is a device that attaches to the back of the telescope and there is nothing on the front to limit the Sun's energy. The catch is that it can only be used on small telescopes (instruments with apertures of around 100mm (4") or smaller. Otherwise the telescope concentrates too much energy into the optical tube and the resulting build up of heat can result in permanent damage to the instrument. 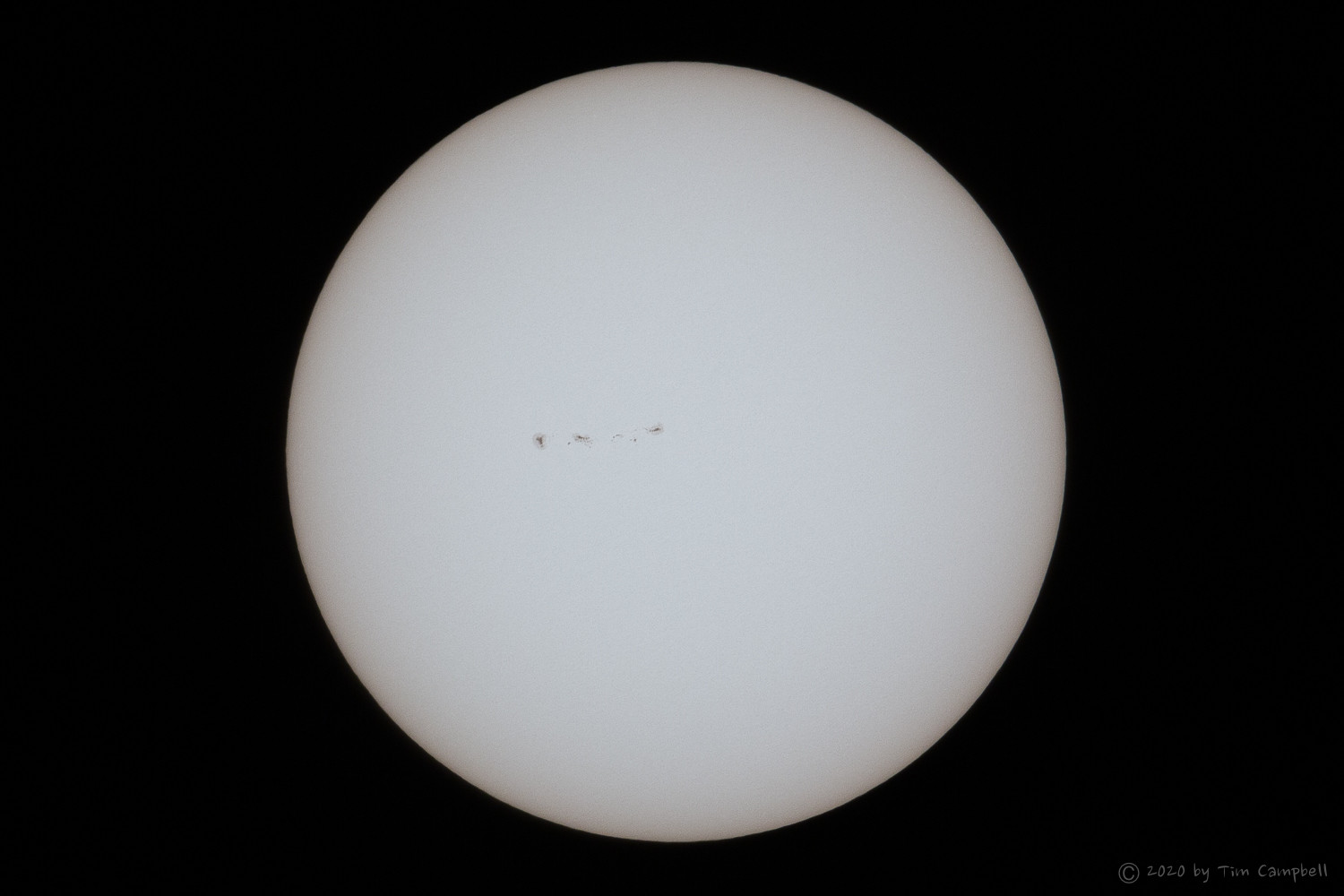 Photographers who photograph total solar eclipses regularly damage their lenses and cameras when they don't do it right. An unfiltered DSLR cannot tolerate being pointed at the Sun for extended periods of time. (It is only safe to view the Sun without a filter during the short period of totality.)

So back to the answer...

Astrophotographers who image the Sun typically record video (e.g. about 30 seconds work is usually enough) and those frames go through stacking software which identifies the best frames, rejects the rest, and stacks the best into the integrated final image.

When doing this, it helps to have a camera that can handle a fairly high frame rate (e.g. 60 frames per second or faster) and ideally all of those are not compressed via any lossy method (most cameras that record video are using a compressed method). This results in really large files. I use a ZWO ASI174MM-Cool when imaging the Sun and about 30 seconds of video at around 120 frames per second results in a 9GB file! (This is a specialty camera used for astrophotography through a telescope but it has a very fast global shutter rather than the more typical rolling shutter that most cameras have.)

It isn't very common to capture video in white light. The more common approach is to use a Hydrogen-alpha wavelength solar telescope. A Hydrogen alpha telescope is a special narrowband telescope that allows the Hydrogen alpha wavelength (656.28nm) of light to pass ... but completely blocks all other wavelengths. This reveals the amazing surface details of the Sun including filaments and prominences. It is only possible to see these in visible light for just a few seconds at the beginning or or end of totality during a total solar eclipse.

There are other narrowband filters such as Calcium K-line filters. But that has a frequency of around 393nm and is mostly outside the visual spectrum. As such, the normal UV filters built-in to most cameras, blocks those wavelengths and imaging quality is poor. Astrophotographers use cameras that do not have built-in filters for this.

You can do the same thing with a white light solar filter. A "white light" filter isn't necessarily "white" per se. It gets this name because it allows full spectrum light to pass through ... just not very much of it. In order for humans to safely view the Sun, the filter must block 99.996% of all the light. A typical white light solar filter blocks 99.999% (approximately 1 photon out of every 100,000 passes through the filter). These filters have an Optical Density (OD) of 5.0. Each 0.3 worth of optical density is equivalent to 1 photographic stop (halving the amount of light that can pass). So 5.0 is 16.667 stops (and that works out mathematically to 1/100,000ths of the light.

The Sun's color is white (the image I posted above is the Sun's natural color). If the filter trims all wavelengths evenly you'll end up with a white image (which usually surprises the public when I invite them to look through the telescope -- I think they expect to see an orange Sun more similar to what they see at sunset). Some of my "white light" filters trim the blue a bit more aggressively than the red and this does result in an orange colored Sun (but is technically being colored by the filter.)

White light solar filters will reveal sunspots, but not prominences or filaments. Though a particularly good filter may reveal some surface granulation (it's usually a struggle to see it. You can see a bit of it in the image I posted above if you look closely.)

While you didn't ask... one interesting application for imaging the Sun with a white-light solar filter is to capture the International Space Station transiting the surface of the solar disk. This requires "knowing where to stand". Basically a pass may occur relatively close to where you live and if you're in the right spot the ISS will appear to fly across the face of the Sun ... but move just a mile away and you'll miss it completely (due to the space stations relatively low orbital altitude.) The station's orbit is perturbed and so while it's generally predictable, it isn't precisely predictable. When I've tried to do this (and blew it) in the past, I can to keep re-checking the data in the days leading up to the event ... then get one last update of the data within about 10 minutes of the event. The final update doesn't change it's position by much (we have pretty high accuracy at those time scales) BUT... what it can change is the time at which the transit will occur (down to the second). It will only be on the face of the Sun for about 1/3rd of a second. It turns out STILL photos at a rapid burst speed and fast shutter speed will get a sharper image than video ... but timing has to be precise. I use a high-speed camera with a global shutter (and my blunder that caused me to miss it was that I mis-timed the moment ... and the camera stopped recording video just a fraction of a second before the transit occurred. I literally had a camera recording through one telescope while I watched visually through a second telescope. So I watched it happen with my eyes and my camera missed it. (A learning moment for me.)

Thousand Oaks Optical sells threaded solar filters designed for camera lenses but these render the Sun with a yellow/orange color cast. But they are convenient in that they are threaded filters. http://thousandoaksoptical.com/shop/solar-filters/threaded-camera-filters/

Baader Planetarium sells non-threaded solar filters (and film) in the 5.0 OD and, as I recall, their filters are relatively color neutral. https://www.baader-planetarium.com/en/solar-observation/baader-solar-filter.html

The Sun goes through sunspot cycles which last roughly 11 years. We are currently just getting beyond "solar minimum". It will become more and more active over the next few years and peak around 5 years from now.

If you want to check on activity, you can get near real-time images of the Sun in Ha from the network of NSO telescopes (National Solar Observatory) located here: https://gong2.nso.edu/products/tableView/table.php?configFile=configs/hAlpha.cfg

The parts likely to be damaged by the sun are aperture/shutter/sensor. Aperture and shutter will still get exposed to the sun permanently between taking still photographs (which are usually done from a tripod since it makes tracking easier), so there is no difference here regarding video.

When taking a video of the sun, you'll usually want to have some sensible exposure rather than just blown-out white. For video, you'll be working with electronic shutter, so the sensor is actually constantly exposed. So you should watch your shutter angle: if you do 30p recording and need to use (say) 1/1000s exposure time in order to get sensible exposure, chances are that your solar filter still admits more light than the sensor will be happy with over extended amounts of time. Your solar filter should be strong enough that you get somewhere in the ballpark of the "cineatic" 180° shutter angle, which at 30p recording would be about 1/60s.

There is not a lot of variation (apart from seasonal) in the amount of light from a sun in clear skies at a given geographic location, so chances are that locally available solar filters are of useful strength.

Not the answer you're looking for? Browse other questions tagged dslr video sun or ask your own question.

3
How do I photograph a landscape with a solar eclipse where the sun is not the main subject?
4
Mercury transit at 200mm + UV + ND?
5
Can the sun damage the sensor on a mirrorless camera?
4
How can I get prevent ghost sun images when shooting with a solar filter?
3
Do you need a solar filter for a wide-angle camera?
3
At which focal lengths is it ‘safe’ to have the sun in frame?
2
Shooting Solar Eclipse with an ND 100000 Marumi - Mirrorless Camera
2
Does focal length correlate to the required ND filter in sun photography?