It has been mentioned at a few places that a larger sensor results in images with a shallower depth of field. Example image: 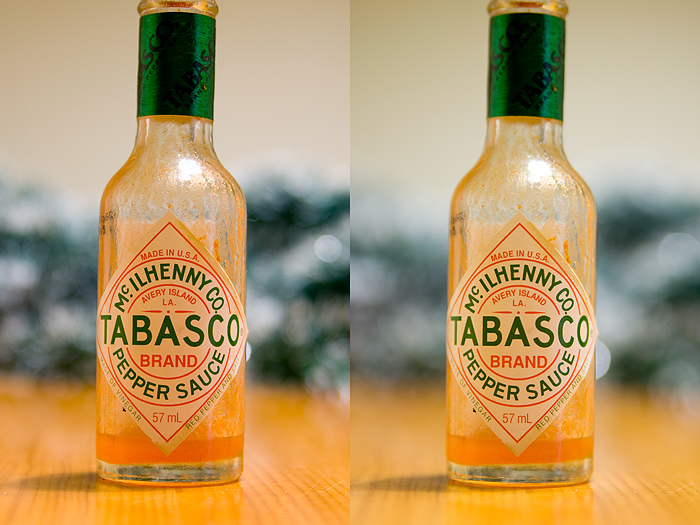 I understand how sensor size would relate to, for example, field of view, but the relationship with depth of field does not seem straightforward.

It actually seems contradictory - I have more wells on my sensor, and I am able to focus on less number of points.

What is the reason for this effect?

To put it another way, if you fix a tripod in place and take a shot with an APS-C camera with the bottle filling the frame, then take the same shot in exactly the same position with a full-frame camera, you will have more space around the bottle. So you will either need to zoom in or move the camera closer to achieve the same shot where the bottle fills the frame, either of which will alter the depth of field,

See this excellent summary of sensor sizes and their effects.

Without moving the camera you will get shallower depth of field when using a larger sensor whilst maintaining aperture ratio and field of view (whilst maintaining the same final output size). I.e. if you keep the same settings but zoom the FF camera to match the angle of view (yielding an equivalent composition).

From this it is easy to work out what equivalent aperture you'd need to get the same depth of field with both cameras/lenses, to get a physical aperture of 18.75mm with a 50mm lens it would have to be f/2.6 (50/18.75) which is more than a whole stop faster!

If you used exactly the same lens, and only changed the sensor size, you would not get a shallower depth of field with the larger sensor.

It's only when you change other variables to compensate for the different sensor size that you may get a change in depth of field.

In the case of the example images you posted, the photographer actually moved the camera! He presumably did this to compensate for the change in sensor size, so that the main subject filled approximately the same portion of the frame. However, clearly when you move the camera, it changes the perspective and relative distances between objects - in this case, with the camera further from the subjects it will have more depth of field.

Of course, if he hadn't either moved the camera, or changed the focal length (via zooming or changing lenses), then the shot taken from the smaller sensor would look "cropped", only showing a portion of the image the larger sensor shows. But in all other respects the technical aspects of the photo would be the same, only cropped.

maybe the clearest way to explain this is: if you compare it to a cropped (aps-c) sensor, shooting the same thing from the same point, to get the same result (framing) on full frame you need a longer focal length; as a matter of fact, longer lenses give a shallower depth of field.

edit(more accurate, more annoying): so it's uncorrect and misleading to say a bigger sensor leads to a shallower depth of field, at least directly, no way this could actually happen.

Depth of field really depends on focal lenght and f-number ONLY; on every possible sensor (or film) the same lens (same settings) will give the same depth of field. If we assume every camera we put this given lens on has the right mount to fit it and the same distance between the lens and the focal plane to get focus right, all we get comparing all possible sensor/film formats is different cropped parts of the same projected image circle.

UPDATE: Here's an update to tell my commenters (and everybody interested) why I didn't account for CoC in relation to sensor size in my answer above. Most people who may read this already know probably more than me about this subject and may find stupid to read something they already know; keep in mind I'm just trying to put this in perspective.

For those who don't know, a Circle of Confusion is one among infinite dots of light a lens projects on its focal plane, in our case the part of a camera where a sensor or some film is. The closest this dot gets to a point (which has no size, but our dot is never a point because lenses are not perfect), the sharper the image (in that area), and vice versa. (A rough definition just to introduce newcomers to the subject, experts please don't waste time criticizing this).

I think we can agree the maximum permissible CoC is a value used to determine with mathematical certainty what is in focus and what is not; it serves the purpose of "drawing a line" (as actually there is a smooth transition between in focus and not in focus), and it may well be adjusted according to the print size you want to achieve, as a larger print would make this transition more evident and, at some level, one would notice that some areas, appearing to be in focus looking at a smaller print of the same image, are actually out of focus.

Applying formulas in which one element is the CoC to determine DOF is an analytic process, so it's a way to understand what's going on, not changing things (i.e. the image a lens is projecting on a focal plane). The fact that CoCs exist and that one needs to decide what's the right CoC size to produce a sharp image of a given size is not changing the way a lens works across different sensors/film formats.

If you want to get a large print, I understand it may be needed to consider a different acceptable sharpness. In my answer above I assume (and I declared I do) the focal plane is always the same, that's what's happening in modern DSLRs we're talking about: the different rendition of a lens on different bodies is just a matter of cropping. 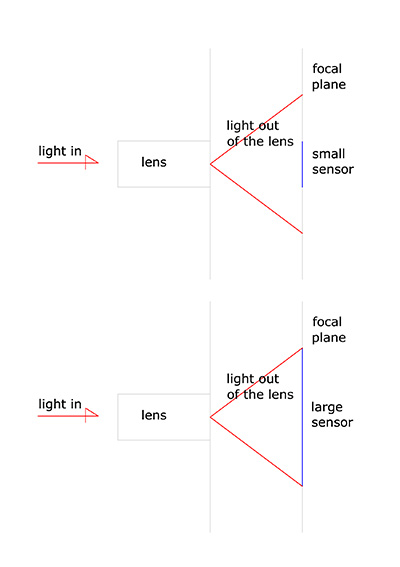 making two print of the same size from the two different sensors will give varying results depending on the resolution of the two sensors.

if we assume pixel density is the same for both sensors and we print at a fixed resolution, the prints from the smaller sensor will look exactly like the larger ones, just cropped.

if again we assume pixel density is the same and we print at a fixed size, the prints from the smaller sensor will look like enlarged crops of the larger ones, at a lower quality.

if we simply and more correctly to the purpose of our analysis assume both have enough pixels to print a fixed size we want without noticeable loss in quality, what we get in prints from the smaller sensor is like a cropped enlargement of the print from the bigger sensor, so we can indeed see a difference in depth of field, that is, we see more detail so it's easier to spot slightly out-of-focus areas. This we could have accounted for if we decided to put a larger CoC in the formula when, while shooting, we calculated the DOF. Who's so rough a photographer not to do so? ;-)

However, I'm not really mocking anyone. I'm just saying, long story short: if you do big prints you might want to squeeze a bit more DOF out of your aperture selecting a higher f-number, so some part of the image around the line separating out of focus and in focus will be sharp enough to be considered fully in focus also in enlargements. That's it.

The same lens with the same aperture settings (at the same focal length if it's a zoom) will always give the same result. CoC is not a physical variable like those I just mentioned which really changes light coming out of the lens and into you camera, it's a parameter used to determine mathematically if something is in focus.

You can't say DOF is a function of sensor size (among others) because larger sensors are used for large prints and in large prints you see out of focus areas that in small prints you don't see. First because to call this an indirect relation is an euphemisms, then because this is accounting for detail at the expenses of sheer exactness. Maybe I'm missing on... more than something.

The reason DoF changed between the 30D and 5D is because to maintain framing, or the size of the subject relative to the size of the image, you have to get the 5D closer. This is because the 5D has a wider Field of View for any given lens than the 30D. The closer you focus to a subject, the thinner your Depth of Field will be.

Depth of field is determined by only two factors. They are magnification ratio and fstop. By magnification i mean final prit size versus object size. larger sensors require less magnification to get to a particular print size thus appear to have greater depth of field, but if magnified to the same ratio as the smaller sensor, will prove that that the circle of confusion is based ONLY on the fstop.

Not the answer you're looking for? Browse other questions tagged depth-of-field sensor sensor-size or ask your own question.

2
how does full frame cameras give better bokeh than crop sensor?
3
When Peterson says 'fixed-lens digital cameras have greater DoF', is he assuming a smaller sensor?
0
Why does an iPhone need software for Portrait Mode?
1
Why is DOF shallower on Full Frame compared to APS-C
121
When do the differences between APS-C and full frame sensors matter, and why?
69
What exactly determines depth of field?
25
Can a smaller sensor's "crop factor" be used to calculate the exact increase in depth of field?
12
How can I take a photo with everything in focus with my DSLR?
20
Why invest in high end large- and medium-format digital cameras?
21
How does background blur (bokeh) relate to sensor size?
See more linked questions

25
Can a smaller sensor's "crop factor" be used to calculate the exact increase in depth of field?
12
Why don't comparisons of aperture take sensor size into account?
3
How do aperture and the tilt portion of a tilt shift lens relate?
7
How do you determine the acceptable Circle of Confusion for a particular photo?
5
For digital sensors and in terms of imaging medium, is the minimum CoC equal to the size of 1 sensor pixel or 2? And why?
2
How do I give my images this vintage travel photo effect?
6
Why do lenses for larger sensors tend to have shallower angles?
1
depth of field and f-stop