Water behind ships much bluer than rest of ocean

On Wikipedia I have found the following image: 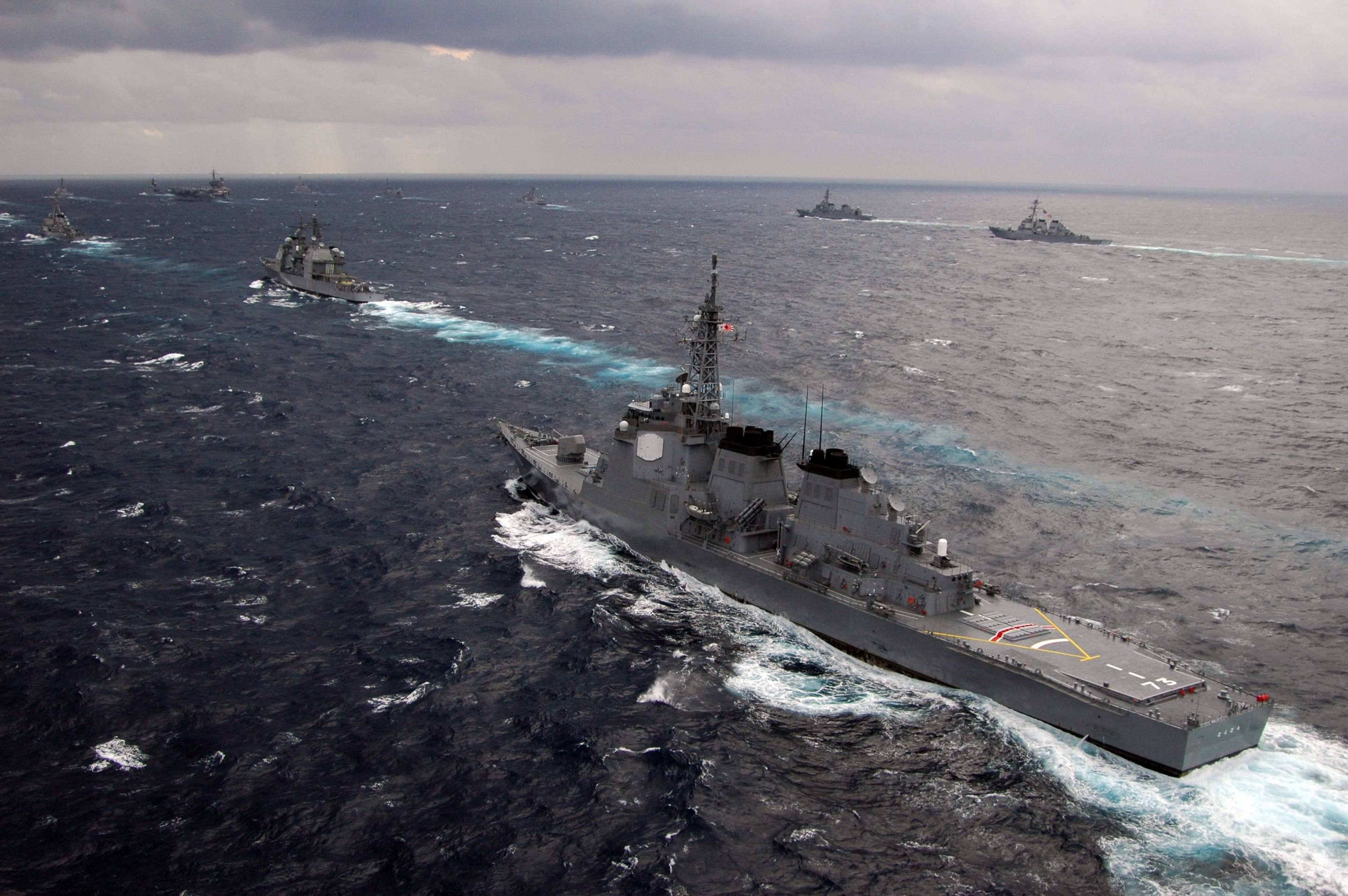 As you can see the water behind the ships is very neatly light blue, but the sky is much more colored like the rest of the ocean. Is this an effect like HDR or plain photoshop (post processing)?

I'd say neither. The effect is natural. The ships' propellors churn the water quite a bit, causing the wake to become aerated. This is obvious from the white caps on the surface. But the aeration also extends below the surface. Aerated water like that tends to appear lighter shades of blue and blue-green.

The description of the file at Wikimedia Commons states that it was taken in late 2005 by US Navy Chief Photographer's Mate Todd Cichonowicz. While there might have been some post-processing, it was probably very little, considering the year the image was produced. Any HDR processing or other unconventional tricks would be required to be disclosed in the image's credit line per U.S. Department of Defense policy.

This added air gives the wake a light blue hue, and since the air bubbles are small they persist for quite some time. I served on a US Navy ship and can attest that the color in this photo accurately depicts what our wake looked like.

As Scotbb answered, it is casued by aeration of the water.

Air is usually colourless and thus mixed with any coloured substance it makes the tone lighter, with respect to the ratio.

Propeller mixes the waters with air forming bubbles of various sizes, the bigger the bubble is the easier it gets to the surface and pops.

I expect the boats go on full throtle meaning higher mixing with air and forming a lot of micro bubbles that "float" in the water thanks to low buyoancy of the bubble and high viscosity of the surrounding water.

The light blue stuff you're seeing are the white bubbles caused by the churn of the ships' propellers.

The water around the ships appears very dark blue because the light from the sky travels deep into the water and is mostly absorbed, leaving little to reflect back into the camera. Whereas the light hitting the white bubbles is mostly reflected into the camera after passing through mere metres of water; however, a little is absorbed. Thus the bubbles appear light blue instead of white.

If the ships were not causing bubbles but dragging bunches of white ribbons a few metres under the surface behind them, those ribbons would appear a similar light blue.

Given the relatively low ambient light level (the scene is very overcast) it may also be a result of bioluminescence. https://en.m.wikipedia.org/wiki/Bioluminescence

Quote: "Among the anecdotes of navigation by bioluminescence is one recounted by the Apollo 13 astronaut Jim Lovell, who as a navy pilot had found his way back to his aircraft carrier USS Shangri-La when his navigation systems failed. Turning off his cabin lights, he saw the glowing wake of the ship, and was able to fly to it and land safely."

Not the answer you're looking for? Browse other questions tagged color water or ask your own question.