I have a Lumix G7 camera, and a Hanimex TS755M external flash from a junk shop. When connected to the camera, it doesn't fire.

Is this pointing to a defunct flash, or is it more likely that there's a configuration issue on the camera which I'll need to fix before it'll operate the external flash (which TBH seems unlikely given that it's detected)? Alternatively, I haven't been able to find a manual for the Hanimex flash, so maybe I'm doing something wrong there; but it only has two controls...

Edit 2: here's a picture of the shoe in question. It's at an angle to show the ground connector on the side (the shoe itself is plastic and non-conductive). The extra stud on the base appears to connect to the Nikon READY pin, but who knows what that pin is doing on a Panasonic/Lumix camera. 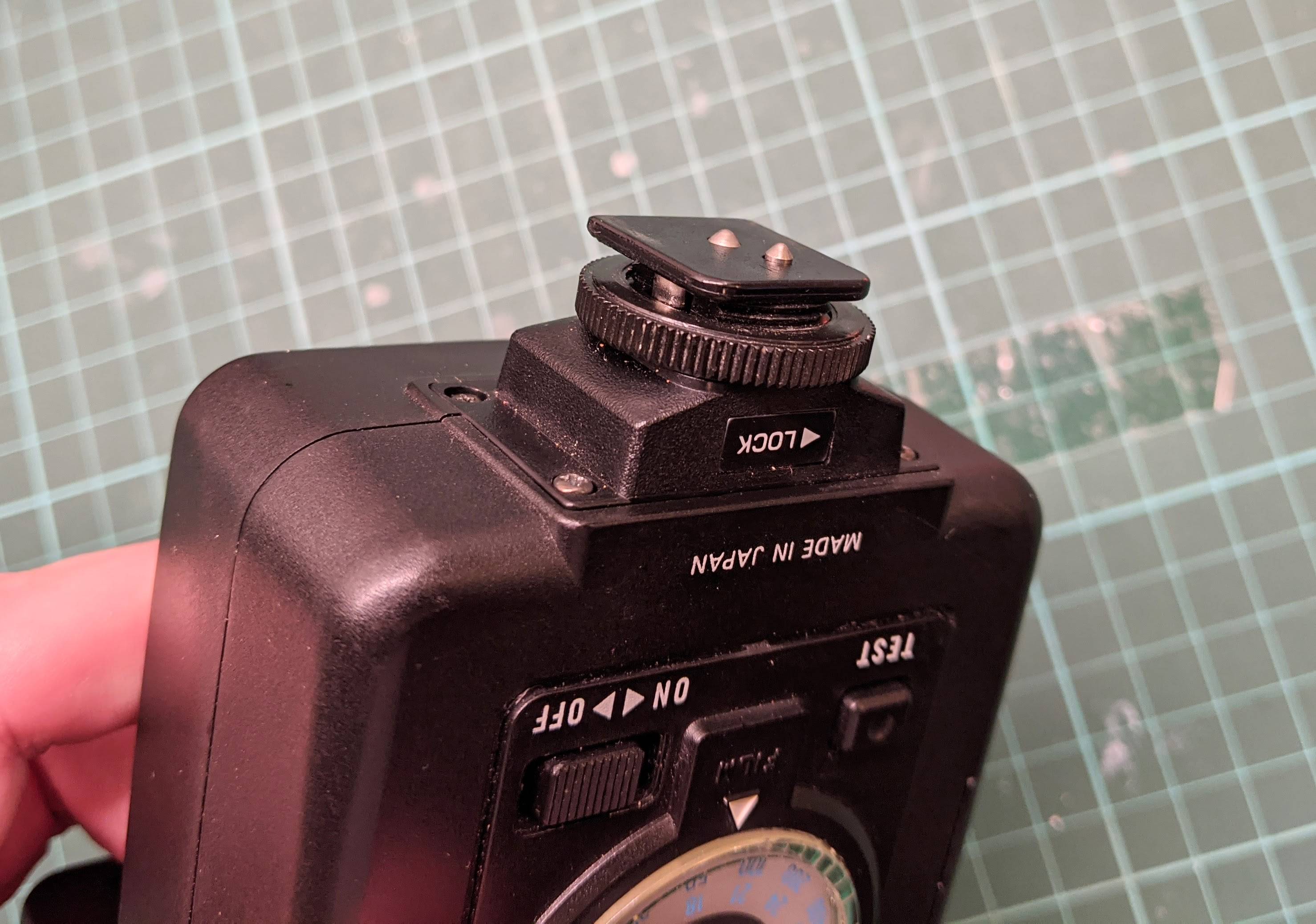 Edit 3: Following a suggestion in the comments below, I tried taping over the extra pin on the bottom of the shoe. This is harder than it looks as the pin is quite pointy, but it does appear that with it taped over, the camera is still detecting flash readiness and the flash still doesn't fire. So, maybe the camera is using signalling on the centre pin to detect readiness?

Edit 4: I tried the flash on another camera (an old Canon EOS). It worked absolutely fine. So there's nothing wrong with the flash.

By far the most likely reason for a flash not to fire is for it not to be fully pushed on.

I don't know the Hanimex TS755M: do you have an image of its flash foot? A flash that only has a single center contact (apart from the ground contact to the flash shoe) can still signal readiness to the camera by having trigger voltage on the center contact or not. While I don't think this is part of the standard, I know that my Panasonic FZ200 does likewise.

So in case that flash readiness is indeed being conveyed via the center contact on its own, the leeway for a contact problem (like incompletely mounted flash) being responsible for the flash not firing is actually rather low.

A photograph of the flash foot underside could help understanding if some communication problem may be at fault.

Not the answer you're looking for? Browse other questions tagged flash hotshoe-flash or ask your own question.

3
What gear for Sony off-camera flash sync with TTL?
3
How do I determine whether flash fired or not?
1
Can't get hot shoe flash to fire on Fujifilm Fine Pix
1
How can I trigger two different flash groups in consecutive shots using Yongnuo YN560-IVs?
1
Canon EOS 1300D does not fire studio flash via sync cable on hot shoe adapter
2
Issues triggering a YN568EX II with YN622C II triggers
1
How to fire an external flash in Liveview mode on a Canon 77D?
1
Why won't my Godox TT685n work from the hotshoe?