How do I get this fashion photograph effect?

I found an interesting fashion photograph and I want to recreate the effect. 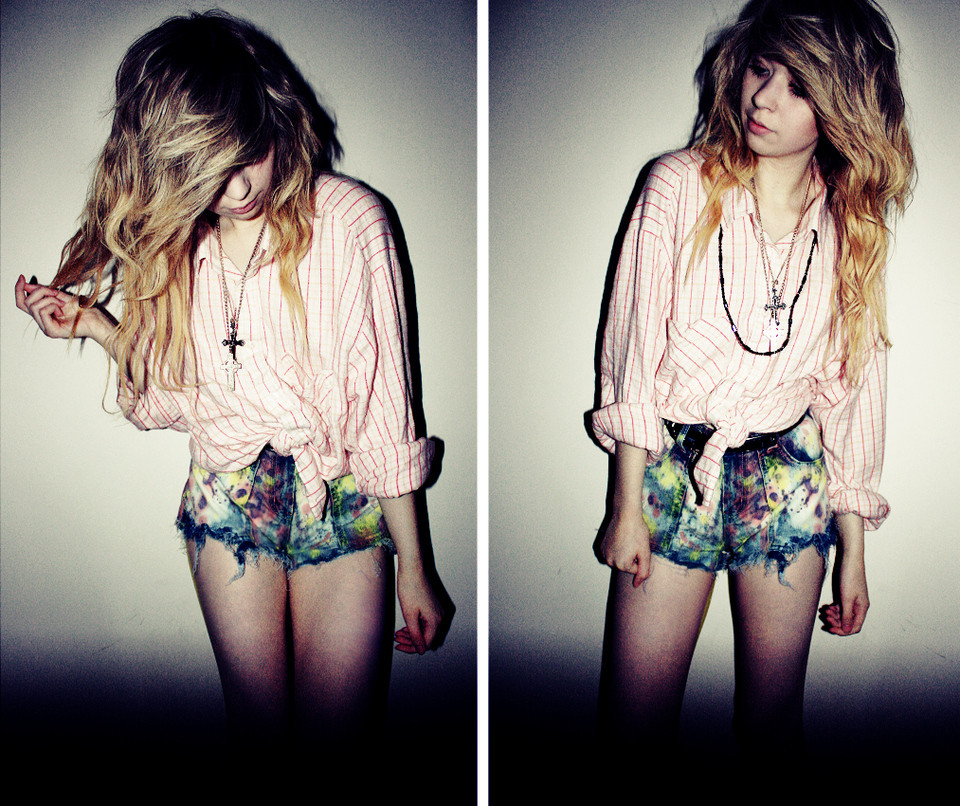 I know for a fact that the pictures are taken in complete darkness using a Canon XSi, the built-in flash, and some post-processing. I don't know what settings to use on my camera to get this degree of sharpness in complete darkness. Any suggestions? There seems to be a vignette effect at the bottom, but I don't know how to create it. I know this is very amateur photography, please don't bash it.

One of the photos has been flipped horizontally (see how the ends of blouse collar fold over each other).

The shadows reveal that the camera was on its side, and pop-up flash was used. Probably on left side (so the picture on the right is flipped), because you'd need additional support under lens and it'd be awkward to reach shutter the other way.

A short focal length to get the pop-up flash vignette so bad. Implied from this, camera is quite close to model.

The shadow in the lower part - shadow of the table the camera was supported by.

Post-production and focusing has already been well described by other answers.

The easiest way I can think of to emulate a shot like this is to do the following:

From a post-production standpoint the biggest thing that looks like is happening is boosted contrast. In fact, that may be the only post-production effect going on... It may have even been done via setting the camera to a 'Vivid' mode (or a similarly named setting, depending on your camera brand of choice). Also, it's likely that the grain in the photograph is caused by using a very high ISO. Alternatively the grain could be simulated in post-production as well.

It looks to me like there isn't any post-production vignette going on, the vignette is simply caused by dropoff from the onboard flash. All in all I think this would be a relatively easy shot to recreate- the majority (or possibly even all) of it appears to have been done in-camera.

Finally, the tripod is probably optional if your f-stop is set high enough... The idea of expensive camera equipment + darkness just leads me to the natural conclusion of 'make the camera as stable as possible so if I accidentally trip and fall over something in the dark like a klutz, at least the camera doesn't go down with me.' YMMV. :-)

Use high ISO (or add noise in PP)

Might try cross processing effects, or else play with white balance. The colours look a bit orange to me.

If your flash doesn't produce the circular vignette, fashion a "snoot" out of rolled up paper, Pringles tube etc and fire flash through that

With NIK plugins and the bleach bypass filter. That is in my opinion the easiest way. (This particular filter is a part of the Color Efex Pro package)

As for the vignette; i believe this is actually a hood on the lens blocking the flash.

Post production is already dealt with nicely in other answers. Did someone mention sharpening?

I think the highest voted answer is a bit misleading, that's the main reason for mine. why can't you AF in the dark? to my knowledge, cameras which don't have a light for that just use the flash. why switch to manual focus before turning off the light? that would not be (always) accurate, as people are not statues.

Not the answer you're looking for? Browse other questions tagged post-processing flash sharpness fashion reverse-engineering or ask your own question.

26
How much "noise" is acceptable in a photograph?
24
What goes into making smooth, crisp, fashion magazine worthy shots?
15
How to get started with fashion photography?
6
Which Lensbaby Sweet 35 or Edge 80 effects are harder to reproduce post-processing?
5
What is this effect called and how can I post process my photos to get this effect?
6
Effects used on Abhranil Das's "Mountains on the Horizon" picture of the week?
2
How do I give my images this vintage travel photo effect?
1
How is this look achieved? The sharpness, low saturation, fashion look
1
Changing the brightness of a calibrated monitor for other uses?
1
How to achieve this light faded, desaturated look?