Why is the North America Nebula so hard to see on this astrophoto? 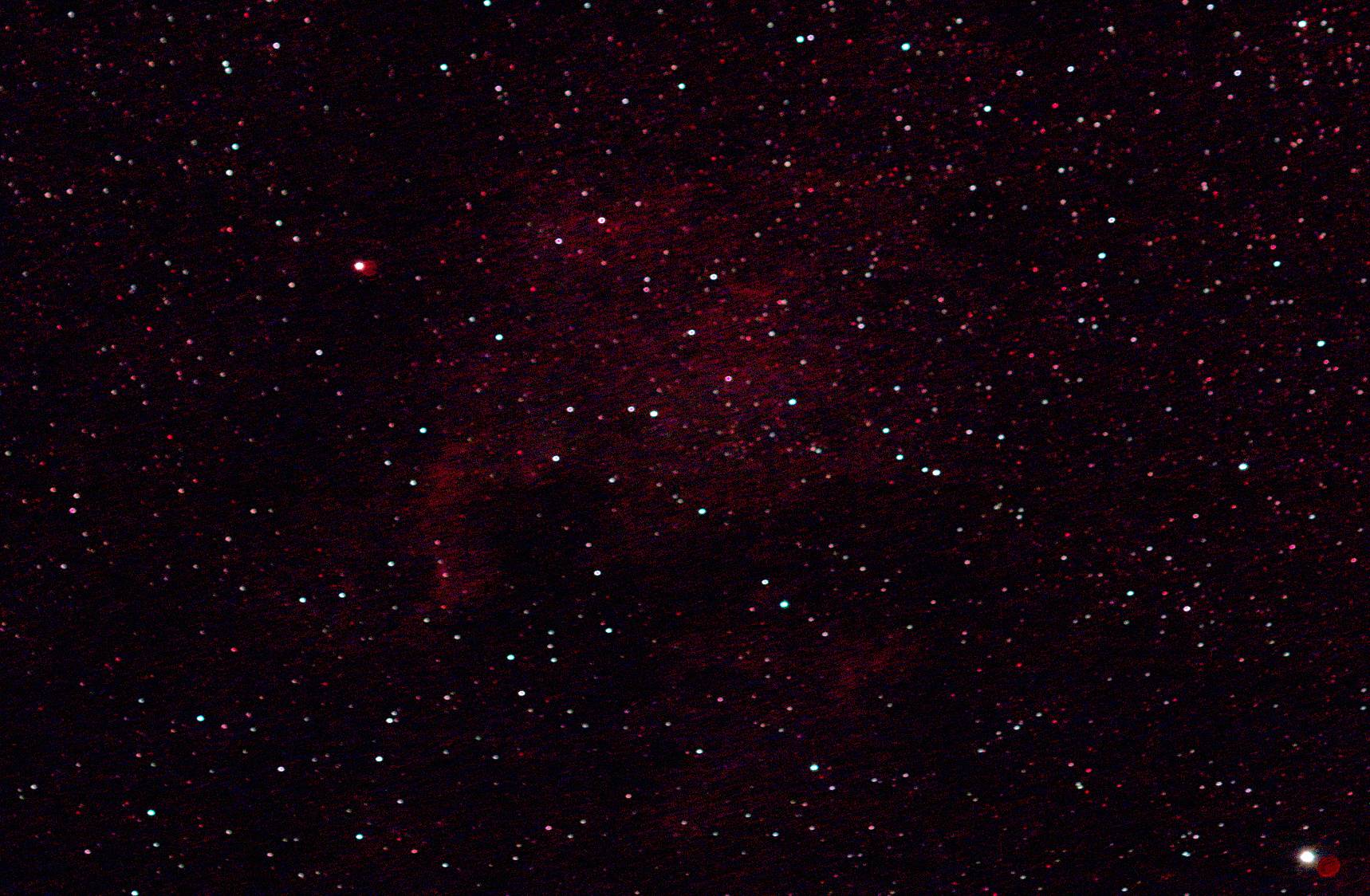 In contrast, a much older picture of the nebula looks much richer in contrast, despite not as sharp: 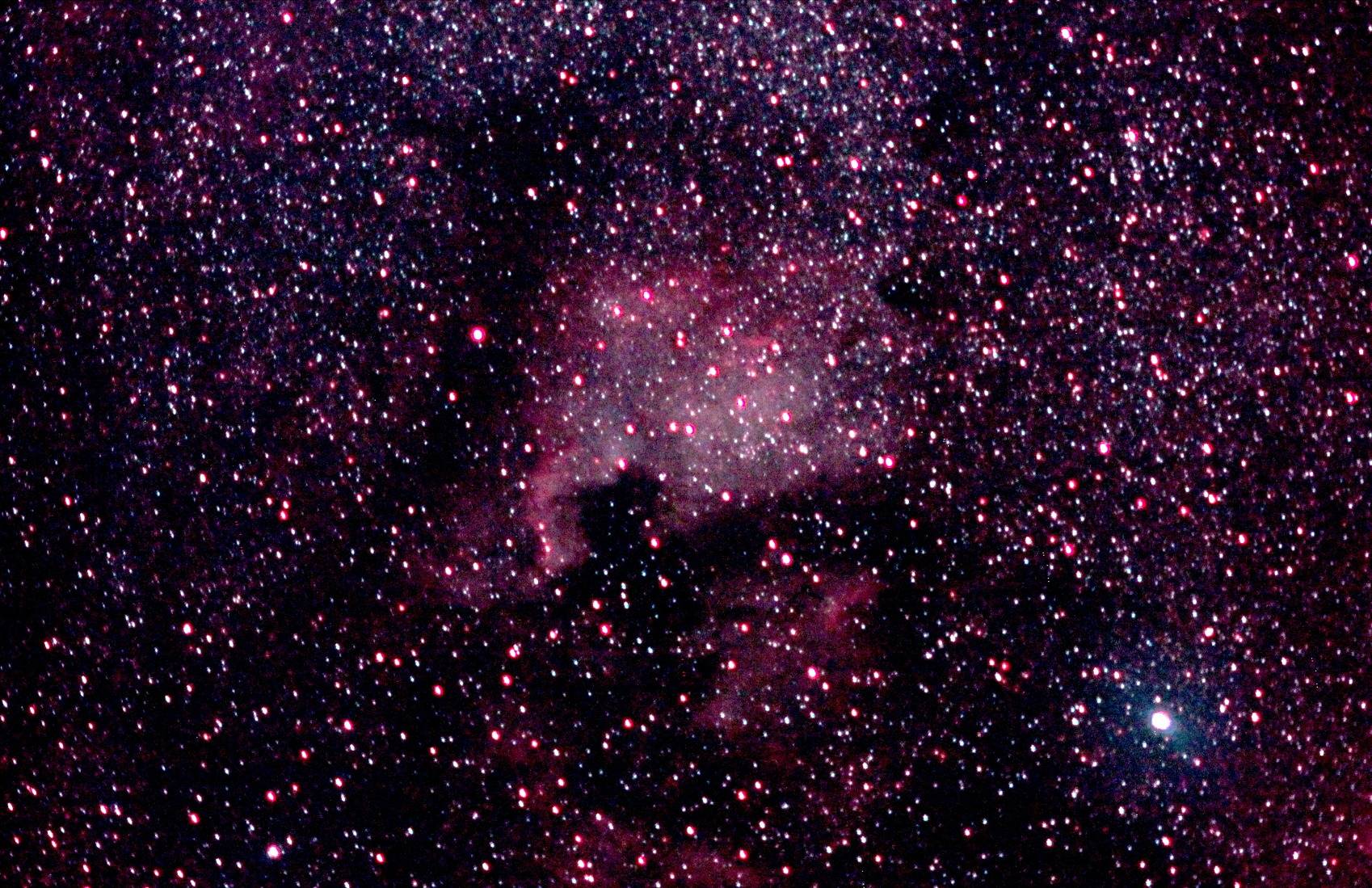 How can the nebula be more visible on the old pic despite using out-of-date hardware and setting a much hier ISO? Thank you.

Your exposures are very different. Ignore the quantity of images that you captured for a moment... and just compare the the single exposure settings (for reasons I'll describe in a moment).

These are very different exposures. If you wanted the top photo to have an "equivalent" exposure to the bottom photo, you would have needed to increase the exposure time to 5 minutes + 5 seconds (305 total seconds) -- but you only used 13 seconds.

There are more advanced statistical noise reduction algorithms which are better (...such as variants on Sigma Clipping algorithms -- provided you give them enough samples; typically a minimum of 10 samples are needed before these algorithms are effective).

While not part of your original question (you can modify your question) you mention you are no longer able to get round stars if your exposures exceed 13 seconds -- and that this your reason for selecting a short exposure duration. You should be able to improve upon this and still have round stars.

Make sure your tripod isn't flexing or shaking during the exposure (wind can cause issues). I use a pretty strong tripod -- it's heavy and not the sort of thing you'd enjoy carrying on long hikes -- but it's solid.

If you suspect your tripod may be shaking or flexing, you can try hanging some weight on the center column.

In astrophotography involving telescope mounts, accomplished astrophotographers will say you should generally spend more money on the mount than on anything else. (It's not absolutely true because you can get some very expensive telescopes... but the point is that mount quality makes a surprising difference and should not be under-estimated.)

If the load is not balanced then the motor on the SkyGuider may be working too hard (or too easy). For small cameras and short lenses it isn't much of an issue. But for heavier lenses, invest (if you have not already) in the counterweight bar accessory. This lets you achieve neutral balance so the motor isn't struggling to track the sky. But I sometimes suggest you don't balance too precisely. The SkyGuider uses gears to rotate the mount. Those gears have some slop (they have to ... otherwise they would bind) and this means there will always be just a tiny amount of play in the right-ascension axis. If the balance is too perfect then the camera can "float" in that amount of play. I tend to fractionally un-balance the mount so that it's always just a tiny bit heavier on the East side of the mount. This way the worm gear always rests on the same side of the spur or worm-wheel gear and it doesn't "float".

The longer the focal length of the lens, the more important it is to have a precise polar alignment. Polaris is currently located at a declination of 89° 20.997' (JNow epoch) - which means it is nearly 2/3rds of a degree away from the true celestial pole. While that might not seem like much ... the angular width of the moon is about 1/2° ... this means you could imagine placing the moon in the spot in the sky located between Polaris and the celestial pole and it would fit with a little room to spare. 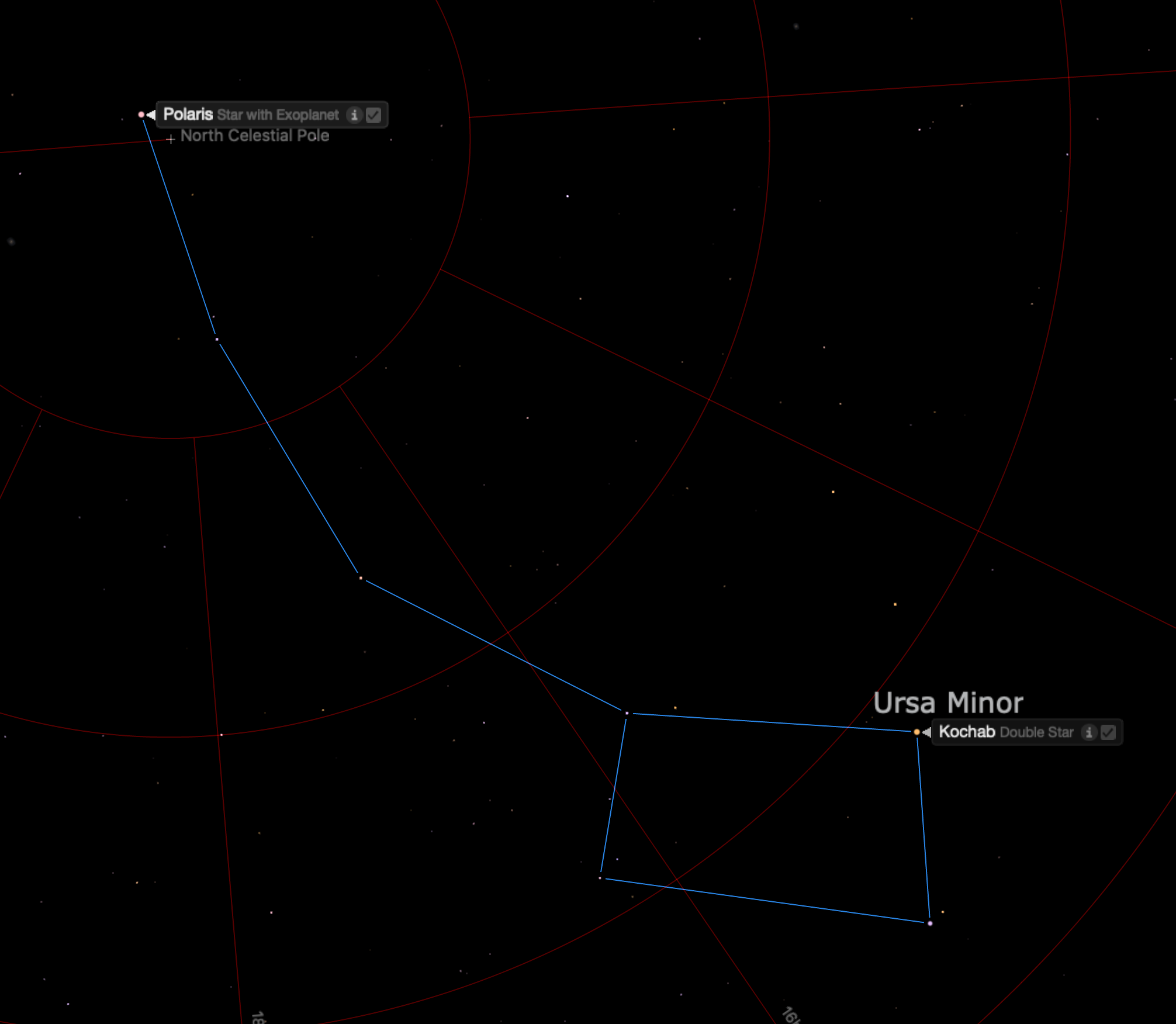 Your SkyGuider Pro has an alignment reticle with marks to help you do this -- but you'll need an app on your phone to know exactly where to place Polaris. I use an app called Polar Scope Align Pro (Available on both Apple and Google app stores). There is a free version but the Pro version is only $3. It will show you exactly where to put Polaris on the alignment reticle based on current date/time/location to achieve an accurate alignment.

Finding the Cause of Non-Round Stars

While framing orientation is normally up to you ... when trying to debug why stars aren't round, orient the camera frame to a North-Up orientation. (so that your flash hot-shoe is pointed toward Polaris). It doesn't have to be perfect.

Take your exposures then analyze your stars.

If your stars are elongated horizontally then it means you have right-ascension error. This usually means that either the mount wasn't balanced or was balanced too well and the tracking head was "floating" in the gear-play.

If your stars are elongated vertically then it means you have declination drift -- which means you didn't really have a precise polar alignment.

I do most of my astrophotography via telescopes but I do own a tracking head. As a test, I've stopped down the camera and shot 8 minute exposures to verify that the tracking is accurate (after being careful to get a nice precise polar alignment). So you definitely should be able to go much much longer than the exposures you've done so far. You'll just need to work out why you're running into issues when you go longer than 13 seconds.

Noise to signal ratio is poor at short exposures. You need them to be long enough and from what I remember before moving on to astrocameras, DSLRs are best when taking exposures at minimum 3.5 minutes. That pretty much means you need expensive tracking gear like a guidescope and guide camera. if you're just using a camera lens and mounted on top of a Star adventurer mount, then you can probably get away with 60 second sub exposures. the 13 second exposures is pretty much the culprit in getting bad signal. http://dslr-astrophotography.com/long-exposures-multiple-shorter-exposures/

Not the answer you're looking for? Browse other questions tagged astrophotography noise or ask your own question.

6
What is the source of this multicolored noise in these samples?
1
How do I reduce the noise in this image / prevent noise in future images?
7
Why did this photo of the Milky Way turn out badly?
8
Photostacking - Why does this technique fail for my astrophotos?
2
What is this random white dot in only one photo of Eagle Nebula stack?
0
What is the max. exposure time when using an iOptron Pro mount with a EOS 70D & telephoto lens?
6
How do I prevent intensive red noise on a deep-sky photo?
9
Why is the earth not overexposed in this star photo from the ISS?
1
Why can't I see anything in the viewfinder or via Live View when my camera is connected to my telescope?