Hyperfocal point if nothing is close to you?

I know how hyper focal distance works in theory and I got the PhotoPills app. My question is though, let's say you're overlooking Grand Canyon. You want to capture everything from the bottom of the canyon to infinity. With 24mm f11.0 you know you need to focus at 5'8'' according to the app. However...there is nothing within your vicinity to focus on. The closest object in your shot is the bottom of the canyon floor which could be 5000 feet down.

So where do you focus in this scenario?

You could focus at infinity and still get everything from a few dozen feet to the horizon within DOF; in this situation, that's what I'd suggest. Your horizon and everything a mile or more away will be (very slightly) sharper than it would be at hyperfocal, and there's nothing closer in frame to be concerned about.

Hyperfocal is about maximizing the range of things that are in focus. If everything is far away, it doesn't really apply, so just focus on these far away things.

The focused distance is the point of maximum sharpness in your image. Anything else is out of focus to some degree.

The purpose of hyperfocal focus is to have depth of field from infinity back to half of hyperfocal. Which can be wonderful if there is purpose for that. But if no purpose, then of course, instead focus on your subject.

If the closest point is 5000 feet, and there is nothing closer, it would be foolish to focus at 6 feet. Focus at 5000 feet (which is infinity). Focusing on your subject would be greatly better for that subject.

But if using hyperfocal, then step back a bit and include someting on the near rim on which you are standing.

If you focus at ∞, the size of your blurring will be 24mm/F11=2.2mm at whatever distance an object is at. You say the closest may be 5000ft down which is 1524m. Those 2.2mm will, at 24mm focal width, map to a distance of 35nm on the sensor. Diffraction will do a much worse job than defocusing here. Actually, a wagonload of other issues will do a worse job than defocusing. It would be actually quite wondrous if the focus could be anywhere near as precise as that.

The idea of the hyper-focal distance is that it is meant to maximize the area that is within generally acceptable focus (not perfect focus... just pretty good).

With older cameras and lenses, it was much easier to find hyper-focal distance -- no applications or charts needed because everything you needed to know was printed on the lens.

Here's a camera focused to "infinity": 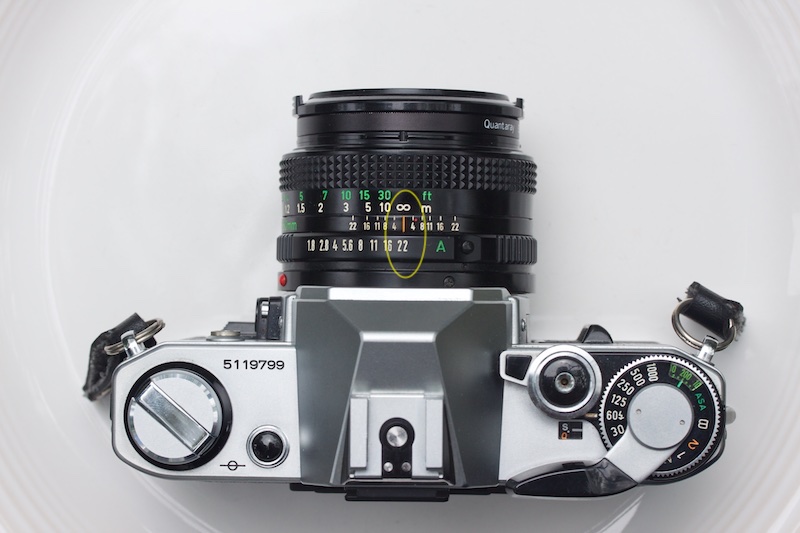 That's the built-in DoF table... since the aperture ring is set to f/22 it means we'll use the "22" marks on the DoF scale ... and match those up agains the distances on the focus ring.

Trivia: There's a tiny red dot next to the number "4" to the right of the focus mark. That's the "IR" mark... when shooting IR file, focus the camera for visible light, then rotate the focus distance to the red dot.

The focus is set to "infinity". Looking to the "22" to the left, you find that it matches up between the 10' and 15' marks on the imperial distance scale -- or between the 3 and 5 meter marks on the metric scale. This indicates that everything from roughly 12' or 4 meters ... or farther ... will be in acceptable focus.

So here's another image: 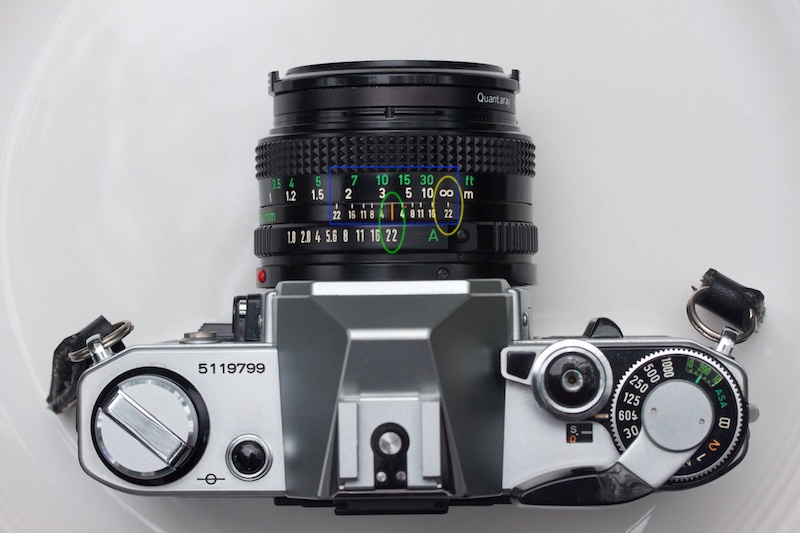 This time, notice that I've circled the fact that the aperture ring is set to f/22 ... so I have adjusted the focus ring such that the "infinity" mark is aligned with the "22" on the far end of the focus.

Using this setting nothing "beyond infinity" is in focus... just everything up TO infinity is in-focus.

If your lens has a marked focus scale or focus window, you can switch to manual focus mode and focus to any distance at or slightly farther than the Hyper-Focal distance.

If your lens does not have a marked focus scale, you're going to have to take an educated guess.

In taking that guess, if you pick a point and use auto-focus ... make sure your camera is not in continuous focus mode (e.g. not using Nikon AF-C or Canon AI-Servo mode) ... use Nikon AF-S or Canon One-Shot mode (or equivalent depending on your camera vendor) so that once you lock focus on the focus point you can re-point the camera without it re-focusing.

When the foreground of the scene is further away than the hyperfocal (as in the case presented in the question), focus on the foreground, as a result the whole scene will be in focus.

In fact, any focusing distance greater than the hyperfocal will get, in this case, the whole scene in focus. Focus on the foreground, as proposed above, is simply practical. And it seems to me that this is what a camera does in autofocus auto mode (i.e. when you let it choose where to focus) at least for the less sophisticated camera.

The explanations that follow are a little long but allow to come back to certain points that must be perfectly assimilated. The most important of these point is the two definitions of sharpness.

There are two possible approaches to the sharpness in digital photography:

The first approach (hereinafter referred to as "digital") leads to take into account the size of the sensor sites.

The second is the legacy approach (hereinafter referred a bit misleadingly to as "film") , but it is still relevant for digital photography, as the view of humans has not evolved. Indeed, this definition of sharpness is based on the human visual acuity. As the eye has a limited power of resolution, any spot on the reproduced image (printout or screen) whose size is smaller than what the visual acuity can distinguish is interpreted as a point. The size of this spot on the reproduced image corresponds to the diameter of a circle on the sensor (or film), this diameter is what is called "circle of confusion". Obviously when, as can be done on a screen (pixel peeping), the image is enlarged, the assumption taken for the calculation of the circle of confusion is no longer valid.

It is therefore very important to determine what the objective is in terms of sharpness digital or film.

b. Sharpness Range - Depth of Field

When my focus is made at a distance D, some of the points located in front will result on the sensor by a spot whose size is smaller than the confuge circle, these points will appear sharp. The smallest distance for which these points appear sharp corresponds to the first sharpness plane. In the following, the distance to this plane is noted FSP.

Reciprocally, the last sharpness plane (LSP) corresponds to the distance beyond which the points will start to appear unsharp.In the following, the distance to this plane is noted LSP.

When a lens has depth-of-field markers, these markers are positioned taking into account "film sharpness".

By the way, some camera that indicate a depth of field scale in the viewfinder allow to choose on which of the two sharpness (digital ou film) notions the scale should be based.

There are formulas to determine FSP and LSP but the simplest call for the hyperfocal distance.

Note: the following is applicable to the common case (i.e. outside of macro photography) when the distance of the scene is much greater than the focal length.

The hyperfocal distance (H) is defined as the shortest focusing distance for which points at infinity remain sharp.

This distance is given by the formula H = f² / (N c) in which f si the focal length, N the f stop number, c the value of the circle of confusion.

Applying thess formulas, we find that for D = H then LSP = infinity, which is reassuring since this is how the hyperfocal; and also that FSP = H/2. Thus, by focusing at the distance of the hyperfocal, all the points whose distance is between half the hyperfocal and infinity are sharp. We can also see that for an focus at infinity, FSP = H which is just as interesting. It is also the second definition for the hyperfocal.

It is however interesting to reformulate the question as follows "For an aperture N, a focal length f, a scene in which the first plane is at the distance d1 and the last plane at the distance d2 (possibly infinity), at what distance D must the focus be made to ensure the best sharpness?"

However, the above does not take into account defects of the lens, nor especially the nature of the light which introduces diffraction. Simply put, when light passes through a hole, it spreads beyond this hole, the more as the hole is smaller.

Given the data provided (24mm, f/11, H:5'8''), we can deduce that you are using a full format camera. With an aperture of f/11, your image will be affected by diffraction if your sensor has more than 24M pixels.

As a rule of thumb , the "sweet pot" of sullframe lenses is around f/8.

So what I would suggest in the case described in the original question is:

Focus manually. Usually if you are using a wide lens you focus 1/3 of the way into the scene. If there is no foreround subject you have no reason to focus that close. Watch your angle.

Not the answer you're looking for? Browse other questions tagged landscape hyperfocal-distance or ask your own question.