What is moiré? How can we avoid it?

What is the image defect called "moiré"? What causes it, and how can we avoid or reduce it? Is it related to "false color"?

Moiré is a form of aliasing whereby false patterns can be observed in an image.

What is actually a regular pulsing is observed as a highly uneven pattern due to temporal aliasing, caused by the sampling frequency being close to but different from the frequency of the phenomenon being observed. This is why wagon wheels can appear to spin backwards when observed with a movie camera with fixed framerate.

Moiré is exactly the same phenomenon but is an example of spatial rather than temporal aliasing. When a regular pattern of light and dark like a manmade fibre cloth is imaged by a sensor with a fixed pattern of pixels the evenness of the fibres gives way to an artificial pattern at a much lower frequency (more widely spaced): 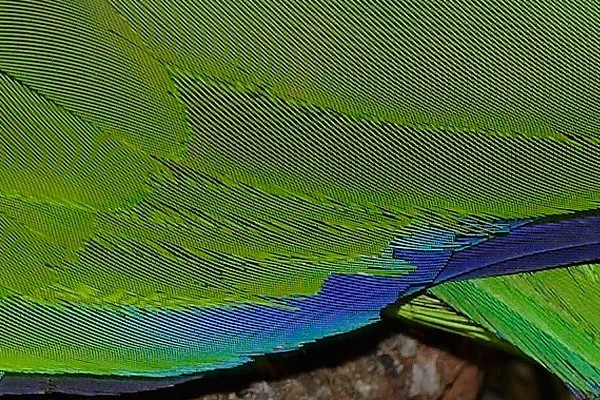 Aliasing is at its worst when the frequency of the pattern is close to the sampling frequency (the density of pixels in the sensor). Low frequency patterns aren't a problem. An anti-aliasing filter blurs the image therefore reducing the frequency of the input and chance of aliasing. The downside is that this also blurs non-repeating patterns which would not cause noticeable aliasing.

Instead of reducing the image frequency by blurring, aliasing can also be mitigating by increasing the sampling frequency, i.e. having more megapixels (without increasing sensor size or lens sharpness). Digital medium format cameras have lots of megapixels but still suffer from aliasing due to sharper lenses.

Anti-aliasing filters are fitted to almost all 35mm DSLR sensors as standard. They can be removed; I know of one company that does this:

The advantage is greater sharpness but more moiré. If you only shoot random natural textures then this is probably a good idea. Some digital MF cameras and backs lack an AA filter. Opinion is divided on why, given how bad aliasing can be on fabrics and the fact the MF is frequently used for fashion. My view is that these images are probably shot at f/32–f/45 with giant lighting power packs, and the diffraction acts as an AA filter.

Moiré can be reduced in software, but only to an extent, it's usually much better to use an AA filter. You can get screw-on anti-alias filters for lenses if your sensor lacks an AA filter.

Moiré is related to false colour due to the demosiacing process. As (most) digital sensors are monochrome devices, alternating colour filters are placed over each pixel and the colours interpolated to produce a full colour image. When observing a high frequency monochrome pattern, adjacent pixels with different colour filters may see peaks and troughs in the signal respectively, and this can be (falsely) interpreted as different colours being present in the input. 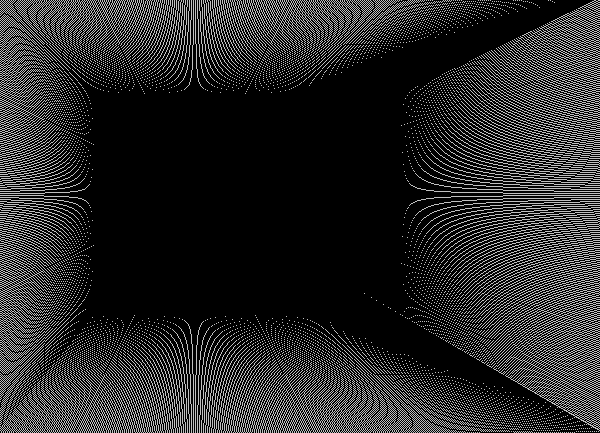 In this case, the appearance of curved lines happen primarily due to the "stair steps" in the lines that happen because a diagonal line gets transformed into pixels that are arranged into a horizontal/vertical grid. In display, it can be prevented (to a large extent) by anti-aliasing -- anti-aliasing smooths those transitions using pixels that are partially lit. If we were to look at a small section of the lines above, one of the transitions would look something like this:

This can be fixed by anti-aliasing the line, which helps fill in that sharp transition with some intermediate gray values, something like this:

Magnified like this, the line probably doesn't look much smoother, but at normal size there's (usually) a clear improvement. Here's a sample of three lines drawn at the same angle, the top with no anti-aliasing, and the middle and lower anti-aliased with two different algorithms:

Most digital cameras do roughly the same thing, filtering the incoming light just minutely, so where the original image contains sharp transitions like this, a tiny bit of light will be dispersed to neighboring pixels, so they can fill in the "stair steps" a little, and cover up the transitions similarly.

Dispersing light this way blurs the image (minutely), reducing the visible detail. No matter what amount of AA the manufacturer decides to use, somebody's going to be unhappy with it. A strong AA filter assures you don't see detail that wasn't present in the original, but loses some of the detail that was present in the original. A weaker AA filter allows you to see more of the detail from the original, at the expense of (possibly) seeing what looks like detail, but isn't really present in the original at all. It's essentially impossible to produce a "perfect" AA filter that assures against any possible false detail without losing any real detail. Most compromise, losing a little real detail, but also allowing a little false detail. Quite a few online forums have long discussions about how strong of AA filter in used in some particular camera or other, usually with an assertion (at least implied) that weaker AA filters are better.

For a long time, all cameras with sensors of APS-C size (or smaller) included an AA filter. Fairly recently, however, quite a few have been introduced that either don't have an AA filter at all, or include optics to negate its effect. At the moment (July 2017) these include:

Most current cameras with 35mm-sized sensors also include AA filters. For a long time, the only ones that didn't were the Kodak DSLR/n and DSLR/c. Then a few years ago, Nikon came out with the D800E. This didn't have an AA filter1 and was successful enough that it started a trend toward omitting them from quite a few of the higher end cameras, such as:

Note: several of the Pentax cameras (with both APS-C and full-frame sensors) include a sensor-shift imaging mode, where (with the camera on a tripod) it takes four exposures with the sensor shifted by the size of a sensor well, so it collects full color information at each sensor location, removing the necessity for (most?) Bayer-related de-mosaicing.

Larger format digital cameras (e.g., Leaf, Hasselblad, Pentax 645D, etc.) normally do not have a physical AA filter. With these cameras, all AA processing is done in software. Depending on the software used (and sometimes parameters supplied to the software) many of these can (and will) produce false detail that's not present in the original subject matter at all.

False color is closely related. Consider an extremely thin white line in the picture -- but it's so thin that it only lights up one sensel at any give point along the line. In a typical Bayer-layout sensor, the sensor wells are laid out so only one color is sensed at any given location. Since our thin white line lights up only one sensor well at each point, it ends up being shown as the color of that sensor well rather than showing up as white (which would require lighting up at least three sensor wells). The AA filter helps prevent this problem as well by dispersing the light enough to assure that any incoming light produces approximately even illumination across enough adjacent sensor wells to show up as something close to its original color.

Again, however, de-mosaicing software that attempts to recover maximum detail can (and sometimes will) un-do this to some extent. In the process of finding the finest detail, it can narrow a line back to the point that it acts like it only lit up a single sensor well, and when it does so the line will take on the color of that sensor well instead of the true color of the line itself, which would require input from at least three sensor wells. Different algorithms produce false color to varying degrees, but as a general rule, algorithms that recover more detail are also more likely to produce false color from at least some images.

1. Technically, it does actually have an AA filter, but behind it has a second filter to undo the effects of the AA filter. This rather roundabout method is apparently somewhat easier to manufacture. Quite a few of the other AA filter-less cameras do the same.

And it's not just an imaging artifact. It can occur whenever fine lines in one orientation intersect fine lines in another orientation. It is common in fabrics where the spaces between the threads are larger than the threads, thereby allowing light to pass through and interact with the pattern of threads in other parts of the fabric.

The moire in this fabric is actually visible to the eye and not just a camera. 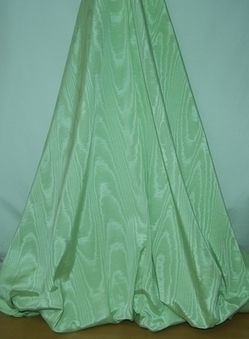 Moiré is an interference pattern. In photography many times it is noticed on the fine detail of a woman's clothing, or a repetitive pattern in architecture.

Moiré can be caused by a scene that contains areas with repetitive detail which exceed the resolution of the camera.

Not the answer you're looking for? Browse other questions tagged image-quality artifacts moire or ask your own question.

28
Why do photos of digital screens turn out the way they do?
3
Is there a name for artifacts for taking a photo of LCD / LED screens and how to remove or avoid it?
2
Why there is a ripple on my image?
35
What's the difference between using black and white mode in-camera, and converting in post?
7
How do fashion photographers avoid moire?
2
What is an AA Filter?
4
What do the different noise reduction options in Silkypix mean?
3
Pattern shown in LED screen background used as backdrop on a stage
2
How can I fix false rainbow-looking color shades in pictures of fabric?
1
Which gear can be used to specifically eliminate moire?
See more linked questions

25
What are jpeg artifacts and what can be done about them?
7
How To Reliably Trigger Moire?
6
What is the cause for this diffused artifact around the sun?
16
What causes and how can I avoid this moiré pattern in a composite night sky photograph?
14
How can I avoid green flare on my sunrise photos?
1
What caused this pattern of lines (moire?) in this picture I scanned from a book?
0
does the presence of Moiré in a photo implies the "lens outresolve the sensor"?
7
What is "veiling glare"? How does it affect my photos, and how can I avoid it?