How can I improve the results of my proprietary RAW processing pipeline?

I captured some raw images using Nokia-900 in DNG format. This DNG has a Color filter Array data (raw Bayer data) which is extracted and given as input to proprietary code. The proprietary software does not use any Metadata/Exifdata present in the DNG file. Adobe PS takes DNG file as input to process. I want to have comments from experts here about Visual Quality of these two outputs, critical comparison between two based on various factors like - Image Noise, Sharpness (blur), Colour accuracy, Brightness, Contrast, Colour Casts, Chroma Fringing if any, and any other parameter which you can point me to.

The steps involved in obtaining the outputs from the two processing pipelines is as follows:

Below are the two images (They are uploaded here as JPEG). Which is better, and what can be done to improve on the second?

I find it a bit difficult to pick one as being drastically "better" than the other.

Yours clearly shows more noise -- but at least at first glance, also appears noticeably sharper. If I had to pick one as a starting point for processing, I'd prefer yours, but if I had to treat one as a finished product, I'd probably prefer Adobe's -- at least for typical pictures of people, where most people would prefer (if anything) to lose a bit of detail anyway.

You've definitely done a better job on the gamma ramp - your grey scale looks about evenly distributed. In the Adobe version, the two lightest blocks in the grey scale (just for one example) are nearly indistinguishable.

It looks to me like you've gotten the color more accurate in general. To help measure that you can get MacBeth color checker data -- both official numbers published by Gretag-MacBeth, and from actual measurements. To use that, you'd probably want to pick the color space you were targeting (probably sRGB) and compare your numbers to the average measured numbers for that color space. You could (for example) compute the deltaE for each patch for both your own and Adobe's results.

To do that, you'd want to start by averaging the values in each patch to eliminate the effects of noise. For example, yours would look something like this: 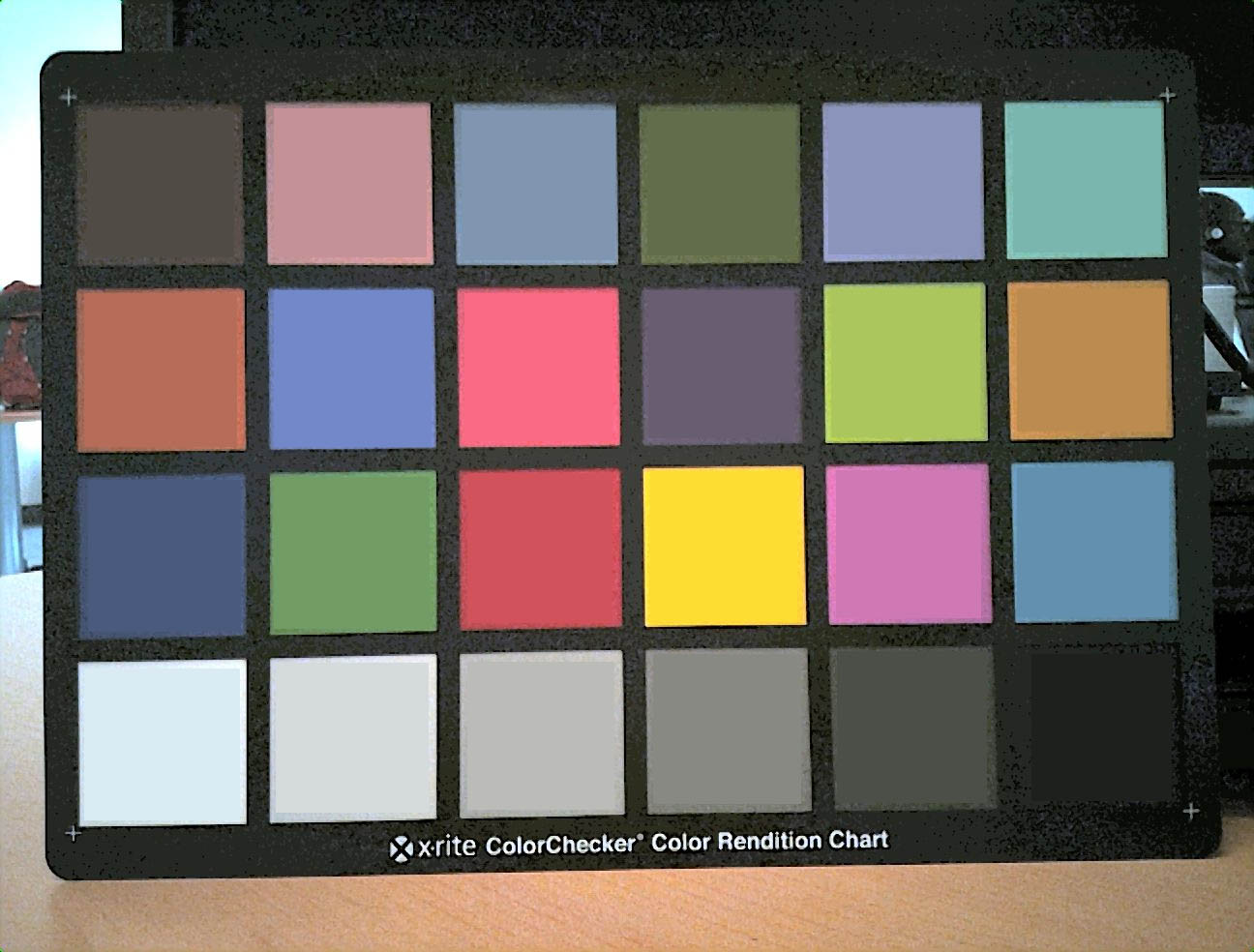 You can then (for example) get the RGB values in Photoshop in the info window (and I'm sure GIMP provides the same, though I haven't used it recently enough to remember the name it uses for the window you care about).

Plug those into a spreadsheet, add a formula for deltaE, and you're on your way. If you want to, you can (for example) create a color profile from that to minimize the measured errors, using the Adobe DNG Profile Editor or various other possibilities. Of course, that's only useful if your pipeline can accept a standard ICC profile. If you're interested only in the one specific source, you might prefer to just alter the matrix you're using (or add a matrix if you're not using one). Then again, as I said, your color accuracy is already better than Adobe's anyway so you may want to consider that good enough and concentrate on other areas.

4
Which colour space should I apply Image sharpening filter?
5
Query about gamma correction?
1
Raw Captured Image processing
11
How does Photoshop/Lightroom get the Colour temperature of a Raw image?
0
How is colour balancing performed in post processing of raw images
5
What's the easiest way to access pure raw data (without demosaicing)?
1
Does changing the WB in post-processing affect noise?
2
How to exposure stack RAW photos while also outputting a raw photo?