Can I simultaneously Charge and use Canon PowerShot SX740 HS

I am planning to buy Canon PowerShot SX740 HS, heard the battery can only last less than an hour. I would like to shoot a 4k 30fps tabletop videos for 2hours. Will it work with external power continuously ? suggestions please

The PowerShot SX740 HS Camera User Guide states on page 123 that the camera can record movies for about 100 minutes on a single, fully charged battery. The CIPA rating, which often varies from real world conditions, is listed on the same page as 60 minutes for shooting video.

The Camera User Guide also lists the Canon Compact Power adapter CA-DC30 as a compatible accessory. The Compact Power Adapter is used, along with the Canon IFC-600PCU Interface Cable to charge the battery using the camera's "digital" (micro-USB) port.

But here's the rub. The User Guide says it takes almost three hours to charge the battery in the camera. Yet that same battery can be depleted in a little more than half that time when recording video. This indicates that the battery can not be charged fast enough via the USB connection to provide enough power to continuously run the camera. To put it another way, the camera uses more power per minute than the amount of power the USB port can provide per minute. It's also not clear from any of Canon's documentation if the battery may be charged at all via USB when the camera is turned on. Many digital cameras that allow USB charging only allow it when the camera is powered down.

But there's often more than one way to skin a cat.

There are some other Canon compact cameras that use the same NB-13L battery used by the PowerShot SX740 HS that can be powered by a "dummy battery" that is connected to an AC power source. The dummy battery, called a "DC Coupler DR-110" by Canon, is part of the AC Adapter Kit ACK-DC110. At Canon's page for the ACK-DC110, it is listed as compatible with the PowerShot SX740 HS.

A small rubber flap is necessary to allow the wire attached to a power coupler into the camera when the battery compartment door is closed. The door must be closed for the camera to power up. Though it is not labeled as such in the PowerShot SX740 HS Camera User Guide, there does appear to be a rubber DC Coupler terminal cover (I've added a yellow circle) in the illustration on page 4 of the Powershot SX740 HS Camera User Guide. 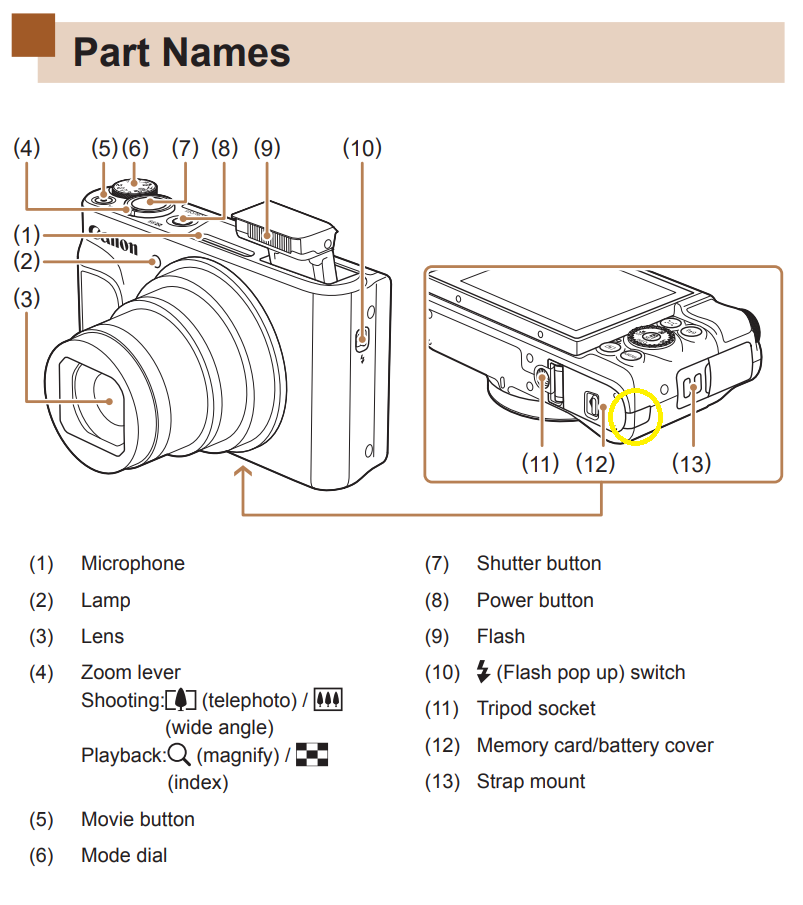 Compare that to the similar drawing on page 4 of the PowerShot G7 X Camera User Guide: 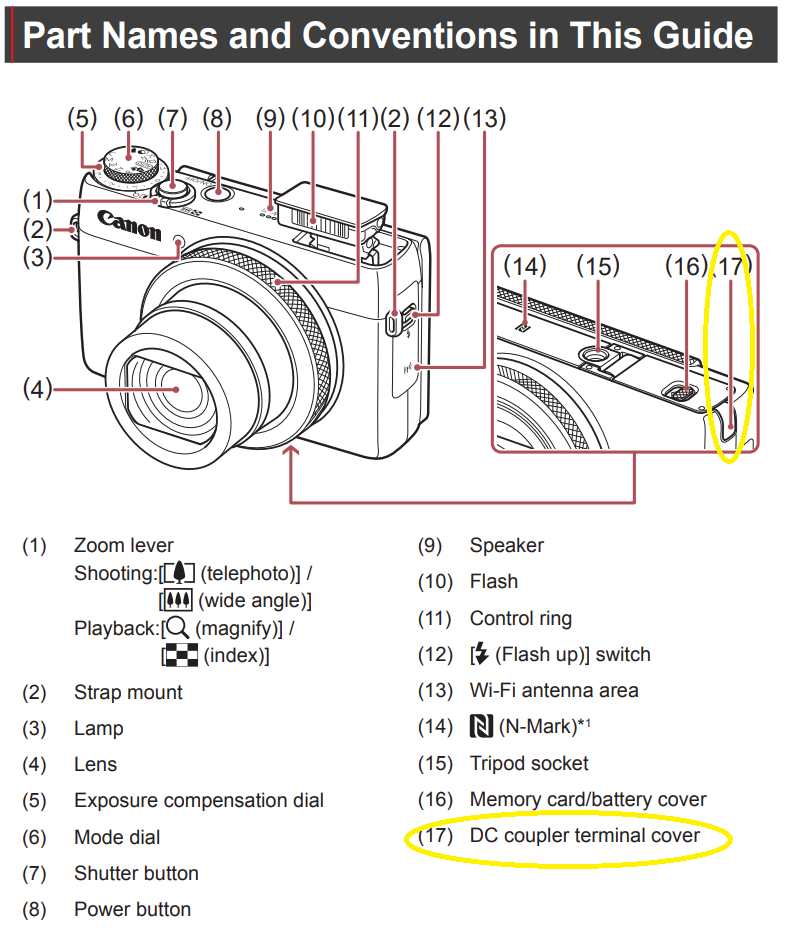 Will it work with external power continuously ?

I'd be fairly confident that the PowerShot SX740 HS can use the DR-110 Power Coupler supplied with current by the ACK-DC110 plugged into an AC wall socket to keep the camera turned on indefinitely. This would allow one to use the camera in whatever way one wishes, whether that be shooting still images or recording video, for time periods much longer than two hours.

If you can't find an actual Canon branded AC Adapter Kit ACK-DC110 anywhere (they seem to have been discontinued but a few smaller camera stores seem to still have a few for sale), there are still a few different brands of third party knock-offs available on amazon.

Not the answer you're looking for? Browse other questions tagged canon camera powershot or ask your own question.

1
Can you continuously charge the Fujifilm X-T200 while filming?

11
Does a camera tethered draw power over USB?
0
Is 35× zoom the only meaningful difference between the Canon Powershot SX 40HS and Olympus Pen E-PM1?
5
Which battery grip should I get for my Canon 60D and why?
3
Noisy images from Canon PowerShot SX150 IS
0
external power source for canon s120 or software solution
2
Why do I get the "Change the battery pack" message on startup with my Canon Powershot ELPH?
1
How can I charge my Canon 760D / LP-E17 battery while hiking in the mountains?
1
How can I wirelessly control my Canon 580ex II?
2
Long distance (20+ m) control options of Canon 7D Mark II with live view