Why does the NEOWISE comet appear green on my photos?

Last night, I took some pictures of the NEOWISE comet. To my surprise, the comet has a greenish colour on all of them, e.g. this one which I've enlarged a bit: 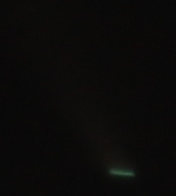 When viewing with the naked eye, it appeared mostly white; I've also seen blueish and orangeish NEOWISE photos on the Internet but never green. The green color also appears on the raw images. I'm wondering what might be the cause of this?

There are multiple possible reasons. First and foremost: Neowise is greenish. That's because of some chemical reactions (mostly diatomic carbon that emits green light when hit by sunlight). So yes: the green might very well be real.

On why C/2020 F3 Neowise seems to be white to the naked eye is because at night, all the cats are gray. Meaning: Below a certain level of brightness, our vision turn monochromatic. That's why most stars seem white to our eyes but take a color photograph of the sky and you'll see a wide spectrum of colors in the stars.

When doing astrophotography, only use RAW -- avoid JPEG. Astrophotography images require a lot of post-processing and JPEG images don't have the adjustment latitude (JPEG is mostly for "final output" -- when no further adjustments are necessary).

In RAW, there is no white balance (the white balance is simply recorded as a preference in meta-data but is not actually processed in the image. Post processing software usually ignores it ... but some post processing applications will attempt to use it.)

The comet appears green because it is green.

As the comet (or any comet) "melts" as it nears the sun, it gives off a lot of dust, but much of the ices are molecules that have very low melting points (e.g. CO2 ice melts at roughly -57°C (rounded value)).

These gasses absorb ane re-emit electromagnetic radiation and this causes them to "glow". The colors you see are based on the elements involved.

Here's a shot (mostly unprocessed with the exception of slightly adjusting the background) that I captured Friday, July 24. But even though binoculars, the "hair" (coma) around the head of the comet is distinctly "green". (I did not want to post a processed shot because that can be misleading). 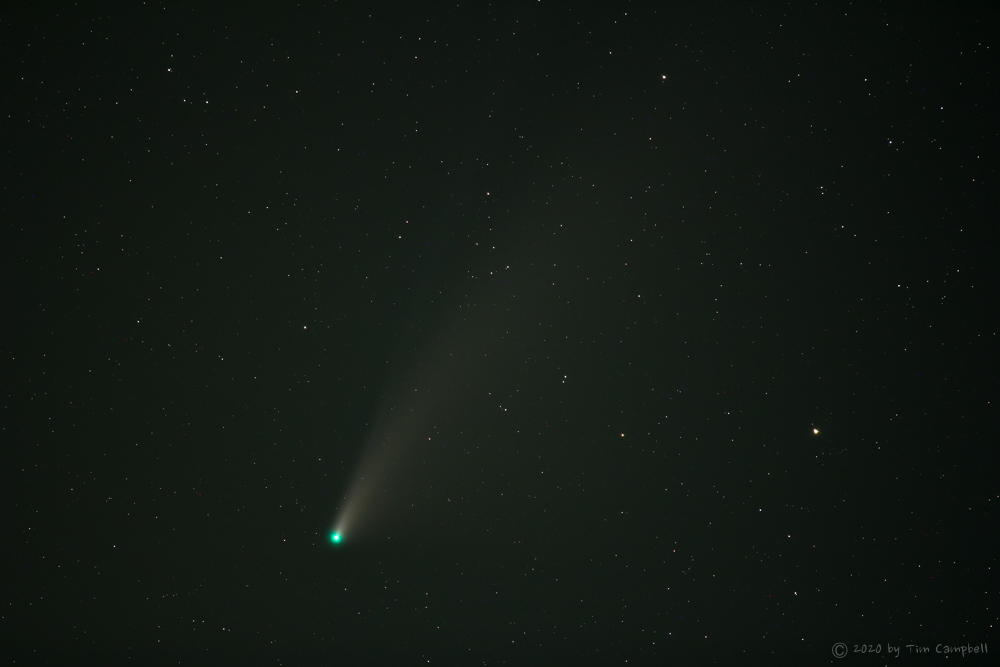 Note the very strongly 'green' coma around the head of the comet. This is not an artifact of the camera ... it appears this when observed through binoculars.

Because when set to "Auto" White Balance, your camera does not have enough information in an almost totally dark frame to guess very well.

For astro work, I usually set the WB to 5200K with no correction in either direction on the Green ←→ Magenta axis. You're always free to change it in development if you're saving raw files. You should always save raw files when doing astrophotography.

19
Why are camera sensors green?
11
Why can software correct white balance more accurately for RAW files than it can with JPEGs?

20
Do photographers see ambiguity in the color of the blue/black (gold/white) dress?
43
Why don't cameras offer more than 3 colour channels? (Or do they?)
0
Does the d7000 have a problem with green tones?
40
Why do stars appear as circles, not points?
56
Why are Red, Green, and Blue the primary colors of light?
3
Why do concentric circles appear in long-exposure photograph of the sky?
4
Why do some star trails appear blue?
1
Why does white balance knob have green and purple setting?