I used a link on

which gave me the file

I put that on a clean memory card as the only file and tried to update my Canon EOS M50 with that firmware.

I got a "rescue screen", but I am not sure what it means. Am I without luck because I have previously upgraded the Canon supported firmware to 1.0.3? If so, is there a way to go back? Maybe factory reset the camera?

Why does this screen read DONE? When I start the camera again, everything looks like before. 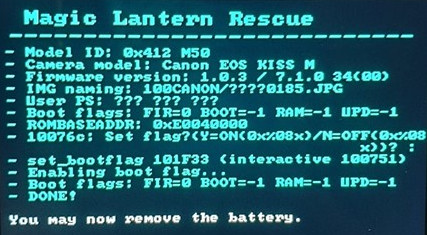 Please find the FIR file for enabling the boot flag on the EOS/PowerShot M50.

There is no official ML build for the M50, yet.

Just grabbing whatever files you can find on the MagicLantern site's discussion board threads and loading them is A Very Bad Idea if you're not a firmware coder with the appropriate knowledge and tools to unbrick your camera. If you cannot actually follow the developer discussion from where you grabbed the file, do not load it, it is not for you. It is for the developers.

Stick to whatever's posted in the main builds, and if there isn't anything for your specific camera body, then wait—or contribute—until there is. Keep in mind, this will be a far more difficult port than with the dSLRs, because the M50's code is based in part on the Powershot code vs. the dSLR code the ML developers are familiar with; whole sections of code they're used to being able to rely on aren't there. Again, a1ex observes, further down thread:

It has some bits from PowerShot firmware, which makes it a bit different from all other EOS models. I mean, porting ML is no longer going to be "just" pattern matching; there will be parts of the code requiring wrappers or other "creative" solutions, not required on other models. That's where the difficulty comes from.

See also: Is there a way to get Magic Lantern on my newer model Canon?

Not the answer you're looking for? Browse other questions tagged firmware magic-lantern firmware-hacks canon-m or ask your own question.

1
Is there a way to get Magic Lantern on my newer model Canon?