Why 1 sunbeam for each aperture blade in your lens? [duplicate]

I don't understand the embolded phrase below. I'm unschooled at physics and photography.

Starbursts, also called sunstars, are beautiful elements that you’ll find in certain photographs. Despite the odd names – one, a type of candy; the other, a type of starfish – I always try to capture them in my landscape photos. Here’s an example: 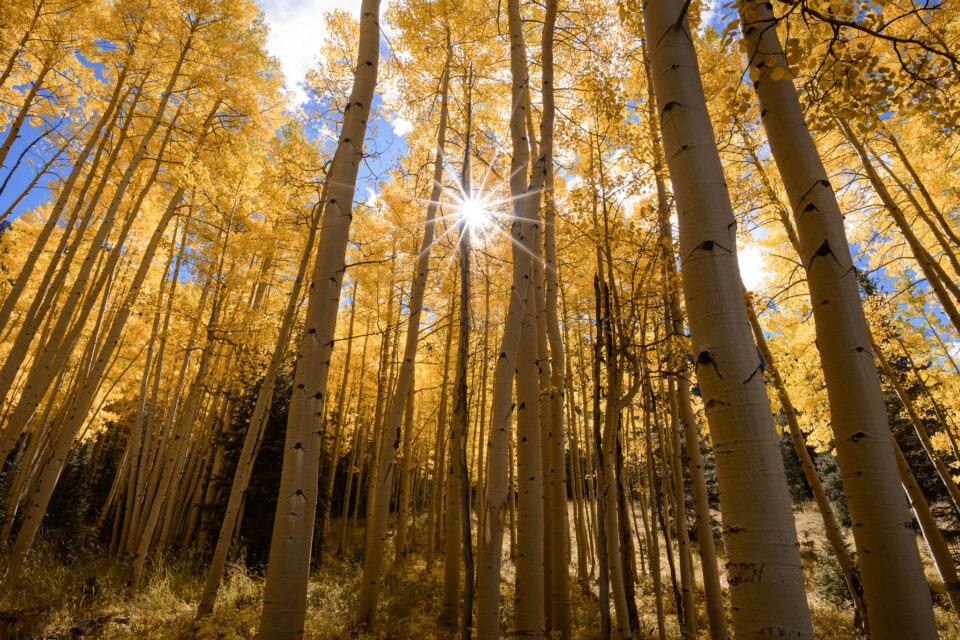 The sunbeams in this photo are purely a result of my aperture (in this case, f/16).

How does this work? Essentially, for every aperture blade in your lens, you’ll end up with a sunbeam. This only happens if you photograph a small, bright point of light, such as the sun when it is partly blocked. This is fairly common in landscape photography. If you want the strongest possible starburst, use a small aperture. When the sun is in my photo, I typically set f/16 purely to capture this effect.

That’s no typo. For lenses with an odd number of aperture blades, you’ll get twice as many sunbeams. Why is that?

It sounds strange, but the reason is actually quite simple. In lenses with an even number of aperture blades (and a fully symmetrical design), half of the sunbeams will overlap the other half. So, you don’t see all of them in your final photo.

Here’s a diagram to show what I mean: 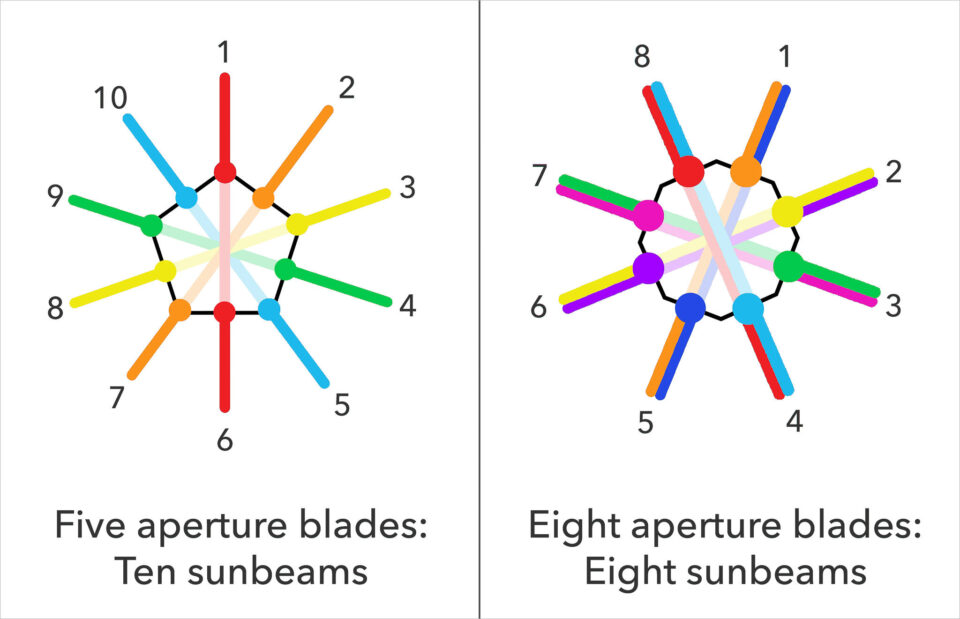 When you have an even number of aperture blades, the sunbeams will overlap.

The effect is most noticeable when edges are straight ... aperture blades that are flat such that the aperture is a polygon. If the aperture blades are rounded, the effect isn't noticed (or at least not as much) because the curve causes the light to spread out along the curve ... rather than all light bending in the same direction and concentrating the effect. It is possible (or it was ... I used to use one) to get a filter that has very fine wires embedded in the glass. These were sometimes called starlight filtered because they turn every point of light into a "star" with diffraction spikes. There are variations on these that used etched grooves ... but these create spikes with a prismatic effect.

Some reflector telescopes (such as Newtonian reflectors -- but there are others that do this) have a secondary mirror near the front of the telescope supported by a "spider" ... usually four thin vanes that support the secondary mirror, but occasionally three. These telescopes also create diffraction spikes. There are variants that used curved vanes specifically to spread out the diffraction effect so that the spike isn't noticeable.

Every edge causes the light to bend in both directions. When you have an even number of aperture blades, the diffraction spikes from the blades on opposite sides of the aperture are overlaid on each other and they double up the effect -- creating fewer spikes but the spikes are larger and brighter. A lens with an odd number of blades will also create spikes in both directions (hence a 9-blade aperture gets 18 spikes) but since the spikes aren't paired up with a blade on the opposite side of the lens, the effect isn't intensified. This results in more spikes ... but not as large or bright.

The camera lens is adjustable as to its working diameter. This is accomplished using thin metal leaves that mechanically move -- thus changing the diameter of the circular light entry we call the aperture. This design is taken using the human eye as a model. The colored portion of the human eye has blue, or hazel or brown or green pigment etc. It is called the Iris from the Greek goddess of the rainbow. We attempt to replicate this action by a means of a movable iris located within the camera lens.

When we do this, the mechanism we use is moveable thin metal leaves or blades. The entry way mechanism fails to make a perfect circle; it has serrated edging. The number of scalloped edges is a function of how many metal leaves make up the iris. More expensive and thus more complicated mechanisms have more leaves, making the circular opening more rounded. Lower quality construction uses fewer metal leaves-- thus the iris opening is more scalloped.

The pattern of the sunburst effect is due in part to the number of leaves used to make the iris opening. This opening is called an iris diaphragm.

The stuff about diffraction spikes: As you know, solid objects cast shadows. These shadows are not perfectly clean at the edges. This is because as light skims by the edges of objects some will ricochet thus their paths are altered. These altered rays comingle with others that passed cleanly by. This is called diffraction and it spreads out perpendicular to the knife edge of aperture blades. The result is a diffraction spike. Since the iris is not a perfect circle, there will be a corresponding spike emanating from an edge on the opposite side of the iris. Thus the number of iris blade dictates the number of detraction spikes that appear. 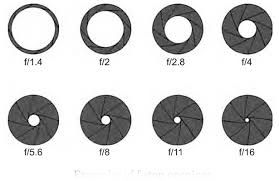 That drawing is misleading IMO. Each straight(er) edge of the aperture causes a diffraction spike that has two points/sides in the resulting image. I relabeled the first half to hopefully make it clearer (the asterisked numbers indicate the edge that caused the spike). In the second half I labeled the spike originations in matching colors. 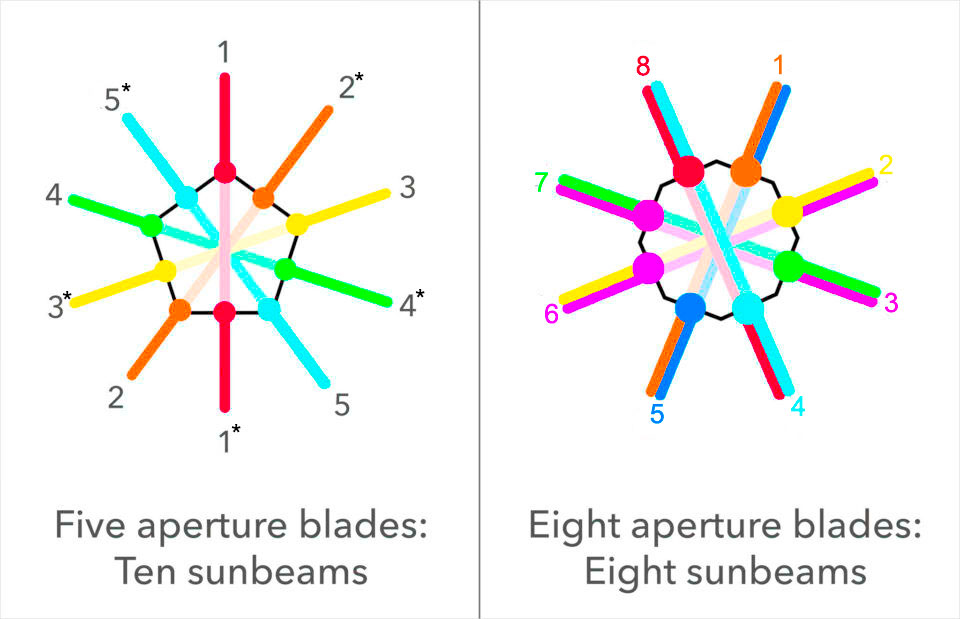 Not the answer you're looking for? Browse other questions tagged aperture or ask your own question.

57
Why do light sources appear as stars sometimes?
31
What does a hexagonal sun tell us about the camera lens/sensor?
10
What causes lens flare along specific axes?
6
What lenses can produce a clean starburst effect?

8
Why does my Zeiss Hasselblad Distagon lens have a 5 blade diaphragm?
3
Why is the sharpness of a lens often determined by aperture?
0
Why are only certain values used for the aperture?
9
Landscapes: why *narrow* aperture?
46
Does this telescope only have a 4 blade aperture?
4
No1 Pocket Kodak aperture 1 to 4, f stop equivalent?
0
Do aperture blades move between each shot in burst mode?
2
How to fix diaphram of Nikon 14-24mm f/2.8 G?
0
Can aperture be changed in aperture mode even with a fixed aperture lens?