What happens when retouch an AdobeRGB image in a monitor that only displays sRGB?

I normally work on AdobeRGB mode and on a monitor that displays this color space. However, I am going to be using an sRGB monitor for a couple of months and I am wondering if this might be a problem. I understand I would be seeing it differently when looking at it in the sRGB monitor, but if I keep retouching in Photoshop in AdobeRGB color space and export it as such, would it make any difference to the final output?

Adobe RGB image in a monitor that only displays sRGB?

I'm not sure if here lies a misconception.

The point is what does it mean?

I will try to simulate the differences.

Here is a typical example vendors use on a website to "wow" you.

And you can think: "Oh, I see that B has vivid colors, and A has dull ones. Take my money, I want B" 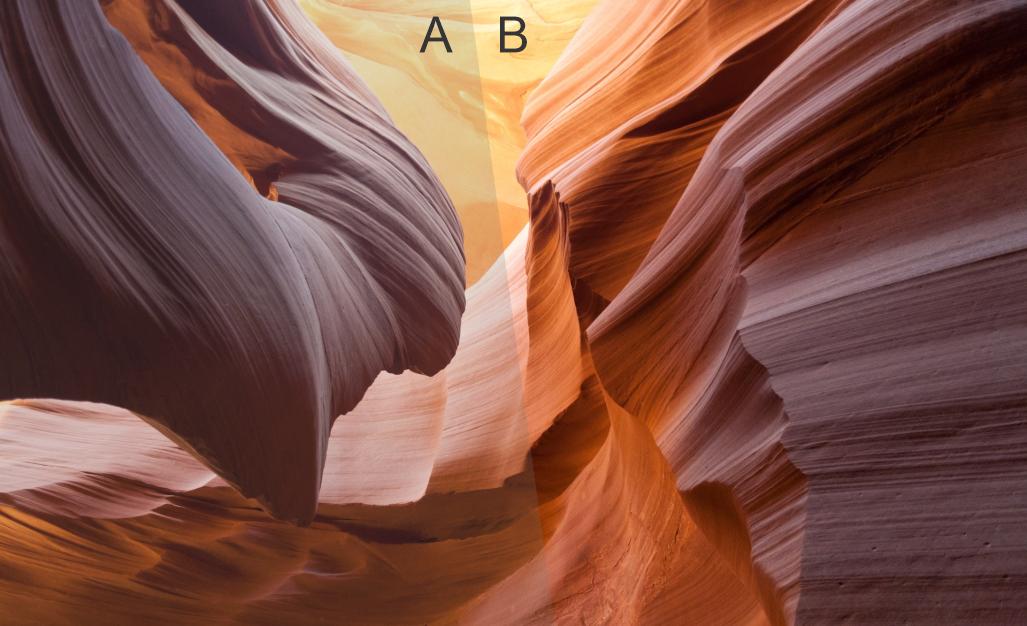 Well, probably B has a smaller color space.

What it means is that you reach the peak of saturation faster, therefore you see images more vivid faster. A higher Color Space means that where the other has peaked, you are still on your way.

Imagine that you have a photo with vivid colors (I should use a green or cyan photo, but this one illustrates more the point I want to make. 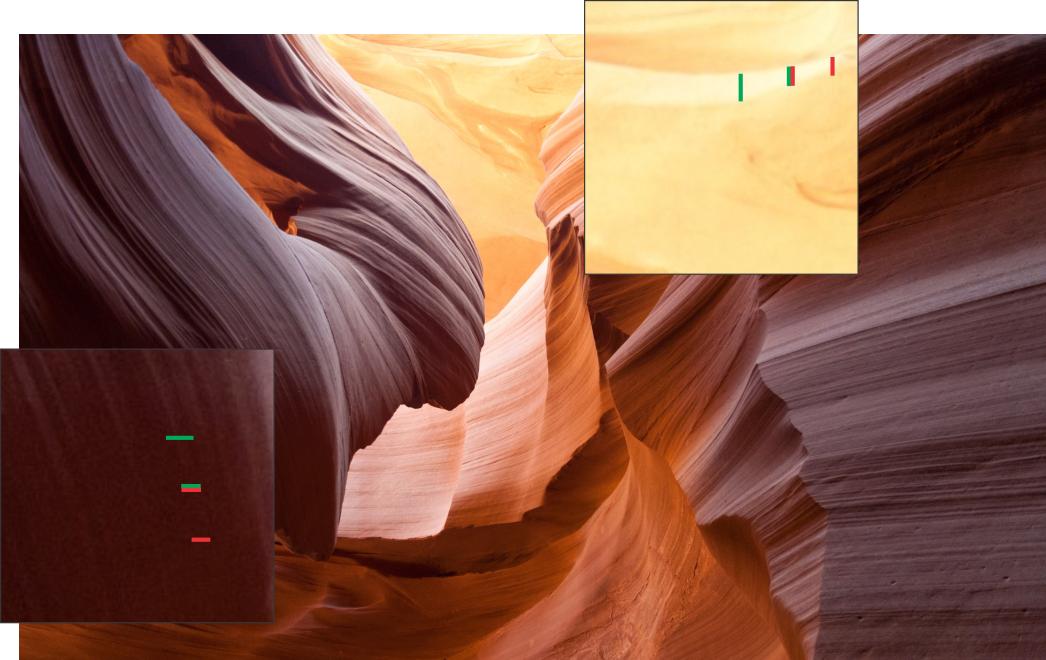 (In a real-life, having two monitors present, yes, a higher color space probably will look more vivid, because additional factors, like the overall power of the light, the contrast, etc.)

The peak of saturation?

It is easier to understand with normal contrast. 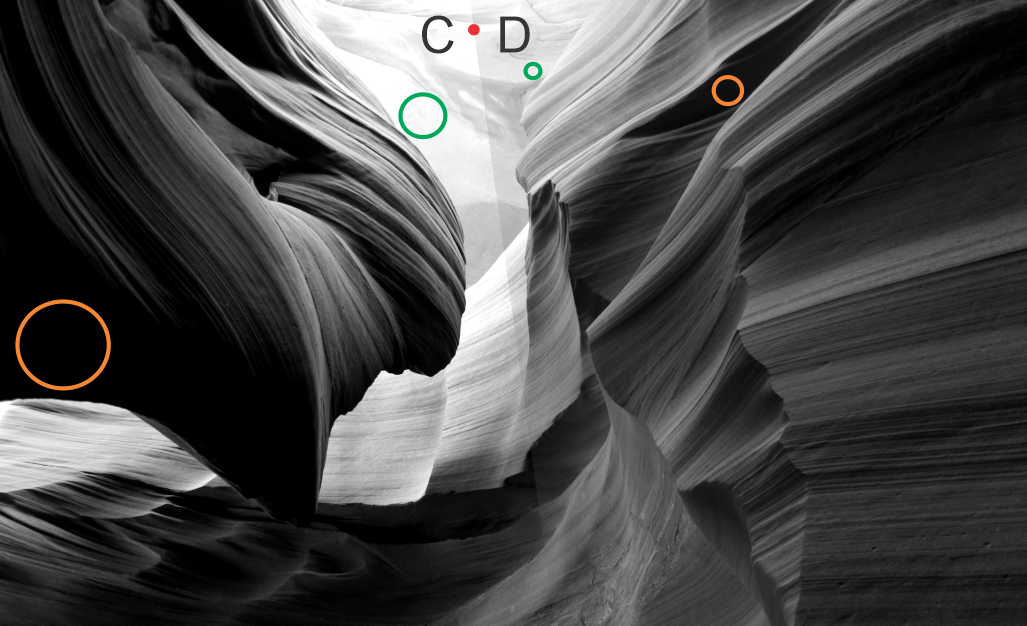 I obviously cheated on the previous image, I grayed it.

Here I am not. I have pure white and pure black on both sides. But on the left, a more contrasted one (brightness contrast), I peaked the black, and from one point I have only black (orange circle) but on the other side, I have smaller zones of black because I still have differences. The same as white.

This is the same with saturation. There is a point where I can not see differences in the saturation of the colors, mainly on greens and cyan.

would it make any difference to the final output?

The question in reality is:

Am I previewing accurately the final output on my monitor?

The answer depends on a lot of factors.

I would say. Some fictitious numbers:

What is your target audience?

The only real way to know is actually immersing in the workflow comparing the two monitors, calibrating them, and comparing them to a calibrated print if necessary.

If the output is for the web, you are fine.

If you ask such question, I presume you know the basics of colour management. Your concern is well founded. But there is not much real danger for your type of work (retouching).

Let's state the obvious first: the wider-gamut AdobeRGB monitor will benefit you only for wider-gamut images. (Assuming other things equal, particularly the overall monitor quality). Images that don't have very saturated colours should look identically on both if the display colour profile is set correctly.1

Now, there are several scenarios and pitfalls you may encounter.

The main thing to remember is that if you preserve your original workspace profile (AdobeRGB), and don't convert your images, you won't damage them just by working with them on a different monitor. You will have less abilities to do the work well, like having a blunt tool, but you will not destroy colours (which is easy to do if you mismanage colour profiles). So, rule #1: don't convert colour profiles of the images in your situation. Just accept the images may look a bit different in one or another way.

So: the problem arises only if you want to retouch areas of highly saturated detail. In the second ('proper') scenario, you just won't see all the detail that you would see with your better monitor, and thus may make wrong decisions. Alas, but this is a limitation of your tool. But again, when you know the limitations of your tools, you just work around them. For example, by leaving such saturated areas (or whole images) alone.

But one of the work-arounds is the first scenario. Basically, you linearly compress the wider range of colours onto the narrower range of the new monitor. Everything gets desaturated, but you reveal the most saturated areas: now they fit into the narrow gamut. This is not too dissimilar to opening a hi-res image on a physically smaller display: you may need to look harder, but you get the same number of pixels (no loss of resolution!) and so ultimately have all the same information.2

This is a compromise for sure, and an uncomfortable one: you get all the wrong colours after all. But it may be appropriate for your task.

You can ensure this situation in several ways.

Other methods assume you have a proper colour profile for the new monitor.

Again, you only need to do such things when working with images that may pose a problem, i.e. when you need to edit highly saturated areas. After all, black & white images should look identically (AdobeRGB and sRGB have the same grey curve).

Many images in Adobe RGB have little if any colors that exceed sRGB. There is a really simple way to check if these colors exist and where on the image they are located using Photoshop.

Reset the desaturation option to return the display to normal.

Not the answer you're looking for? Browse other questions tagged color-management srgb rgb or ask your own question.

13
How can I ensure proper color rendition with browsers on wide gamut displays?
29
Does the selection of sRGB or Adobe RGB in camera when shooting RAW ever matter?
0
Color spaces for large prints / and or web
5
Oversaturated colors in Chrome (V43) on wide gamut monitor
6
How to calibrate image darkness (blacks and shadows) between Lightroom and printers?
1
How to set up correct color profile in Windows?
0
lightroom photo export with sRGB profile
2
How do monitor and image editing software color profiles interact?
3
Color appearance during editing and after export when using a wide-gamut monitor
1
Can I use “sRGB mode” or a manufacturer's ICC-profile as a poor substitute for hardware calibration?