I've taken below photo with my Nishika n8000 using the cloudy/poor light mode (I believe it then picks an aperture of f/8). I used Kodak Ultramax 400 and a flash for a majority of the shots which were taken indoors in low light situations. The roll of Ultramax 400 was newly purchased from B and H so I don't think its expired.

I got my film developed by thedarkroom and recently got the scans this morning. All of the shots came back very blue and washed out.

Earlier I used Kodak Gold 200 with this camera. Although most of those shots came back underexposed due to me not using a flash, none of them had this blue issue that I am seeing now.

Is this user error, equipment error, or error on thedarkroom's part in developing? 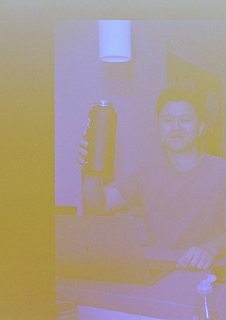 Film simply doesn't perform well "indoors in low light situations". Light levels are measured as an Exposure Value (EV). Home interiors with average light measure about EV 5. With ISO 400 film, EV 5 scenes would require an exposure of about 0.5 seconds at f/8. Was the camera exposing for so long? I doubt it. Even with flash, you may not necessarily get a significant increase in lighting. On-camera flash, especially on a cheap old camera, is not going to be very powerful.

Have a read of Fred Parker's Ultimate Exposure Computer.

What you are seeing is called "Reciprocity Failure" of color negative film from under-exposure.

Color film works by having multiple layers of chemicals (emulsion) that are sensitive to different colors (light wavelengths). When there is very little light to collect, you see color shifts because some emulsions are more sensitive to light than others, and because light falls on the different layers in a less uniform way.

You could go with a more sensitive film but it'll start getting very grainy. You can also fix this by getting more light into the camera and onto the film -- higher powered flash.

5
Why aren't the 35mm film scans I got back from a lab at a 3:2 aspect ratio?
2
Negatives came out very thin
2
Got back my film - Nikon FM2 missing shots, blue marks, what happened?
6
(film) What can cause blue vignetting on sub-exposed or dark shots?
8
Why did my developed photos come back blue outdoors (and fine indoors)?
4
How long can a 35mm film be used/stored before it starts to lose its quality after expiry?
1
Printing negatives: from scans or direct?
1
Why was my film back in the canister when it felt like my Canon AE-1 wasn't rolling back the film?