When I loaded my files in PS, I was shocked to see this: 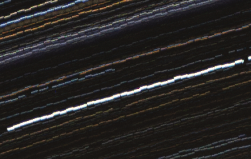 Looks to me like you might have forgotten to turn off image stabilisation in camera and/or lens.

Image stabilisation uses acceleration sensors to estimate movement/shake of the camera/lens and then moves optical elements or the sensor to compensate. On a tripod, this does more harm than benefit since errors in the estimated movement accumulate and cause the compensation to drift. When the compensation drifts out of its capture range, the stabilisation may reset it to a neutral position.

Some cameras may autodetect when they are on a tripod or similar and switch off image stabilisation on their own, but that's not a given. And particularly with multiple exposures, you don't get a guarantee that each shot will start at the same compensation position even when the camera then does not change it while exposing. Switching stabilisation off fixes sensor and compensation lens elements in place.

Update: The OP has revealed that IS was turned on during the series of frames. This would certainly explain the issue. The answer below assumes that IS was disabled. We'll leave it here in case someone else who has a similar question but was not using IS comes to this question.

There's almost always surface winds blowing where the ocean and land meet. This is due to the temperature differentials between the land and ocean as they absorb heat from the sun at different rates during the day and release that heat at different rates during the night. This also contributes to turbulence at higher levels in the atmosphere above the land and ocean near where they meet. Turbulence in the air between your camera on the ground and the stars on the other side of the atmosphere can result in poor "seeing", which is very likely contributing to your problem. The best places to do astro work are at higher altitudes in cool, dry air, and away from light pollution. There's less air between you and the stars, and what air there is between you and the stars is more stable.

Having said that, there may be other factors contributing to your issue as well. Tripod stability can also be a problem with long exposures.

One nice thing about carbon fiber tripods is how light they are, comparatively, when we have to carry them around.

One not-so-nice thing about carbon fiber tripods is how light they are, comparatively, when we use them in an environment with wind blowing, such as near the ocean.

If your tripod has a center column with a hook below it, hang a bag full of sand, rocks, or even your backpack on the hook. Since you are near the beach, you can wait until you get there to fill up the sandbag. In other areas, a few rocks will work just as well.

Speaking of the center column...

You should only use the center column raised from the fully lowered position when you absolutely have to increase the height and the legs are already fully extended.

Don't do it this way:

Instead, do it this way: 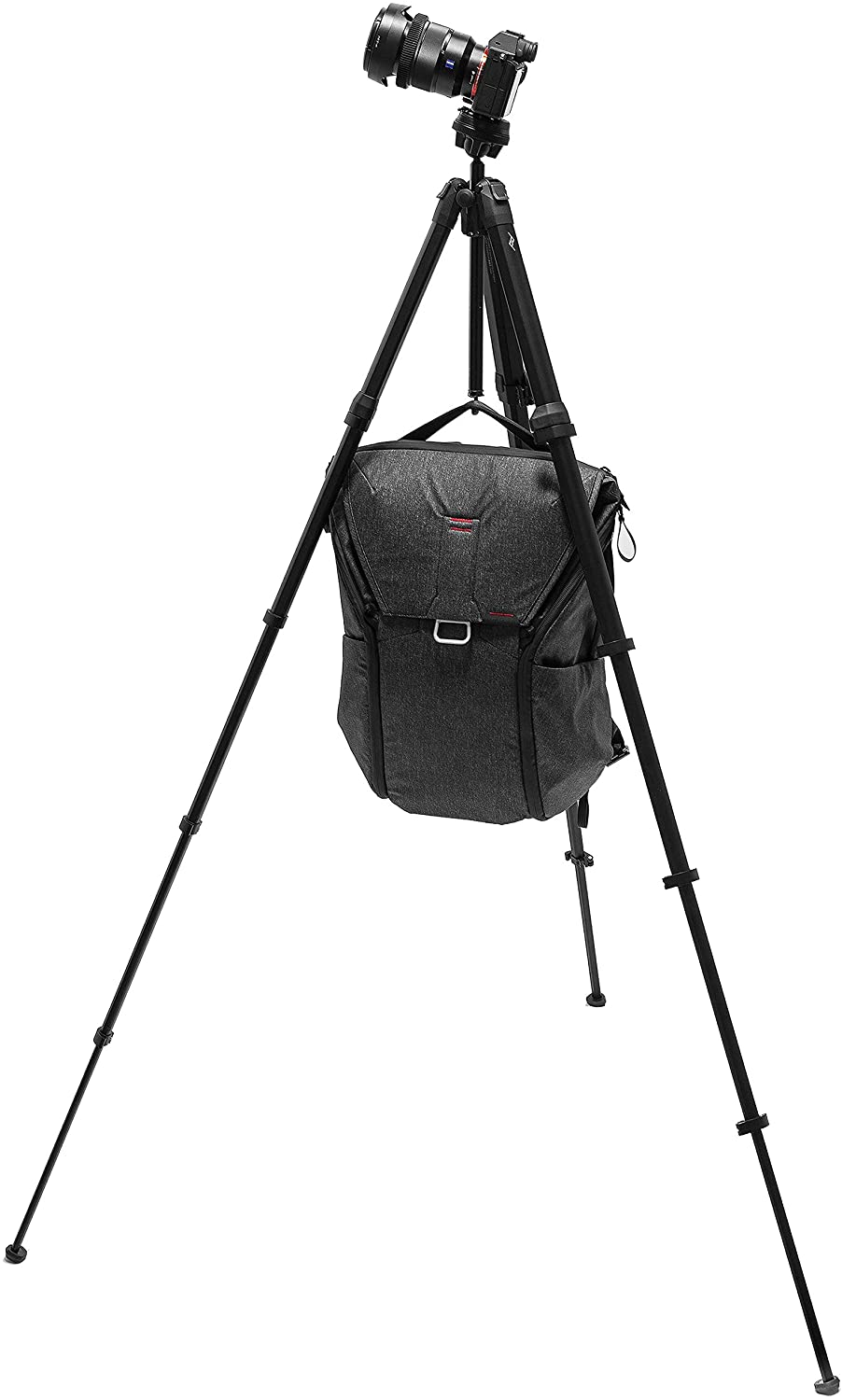 There are three reasonably likely causes for star trails with "bumps" like the ones shown:

First is camera movement during the exposure. If the tripod wasn't quite steady enough, or something (a cat or dog, for instance) rubbed against one of the legs, you could get a "bump" in the trail. What shows here goes on for much of the exposure, so it would be a very persistent cat, if that's the answer. Minor earthquakes could do this, too, if you're in an area prone to those -- but again, they'd tend to be momentary, so affect only a very small segment of each star trail.

Second is air movement -- what astronomers call the "steadiness" component of "seeing" -- what we see as stars twinkling is actually movement of their images due to variations in density of the air changing the path of the light. This will tend to be more or less random, and is likely to be worse early in the night and get better as the air mass cools and turbulence drops off -- though sometimes, seeing will remain bad all night.

Third is what I learned to call "jaggies" when I was doing computer programming back in the early days of computer graphics (ca. 1980). This is an artifact of digital displays and sensors and of the quantized nature of the coordinate systems they use -- and doesn't appear applicable to the random-seeming bumps in your trails.

Based on what I see, I believe your issue is due to air movement, aka "seeing".

What you can do about it? There are web sites that provide seeing reports (often including dark sky and air clarity reports); they're aimed at deep sky observers and photography, but seeing is important to any long exposure astrophography. The first thing is: don't expect excellent results when the seeing is bad. Things will tend to be worst just after dark, when roofs and pavement are cooling from the day's solar heating, and when there's wind (especially if it's gusty). Wind will also contribute to tripod movement.

Can you fix this in post? To some level, by applying blurring and sharpening it might be possible to smooth out the trails -- but you'll never get the classic, dead smooth trails you'd see from a really steady mount with good seeing.

Given that the trails are so jagged, I think the issue is between shots. Each shot of 30 second seems to produce a smooth segment but they do not line up properly. Unless it is the software you are using that has trouble with lining up the individual images, I would suspect:

It's hard to know but you might be able to save the stack by using a different software that can auto-align images otherwise you will have to reshoot.

After looking at the meta data, I believe image stabilization should be the culprit for causing this phenomenon. 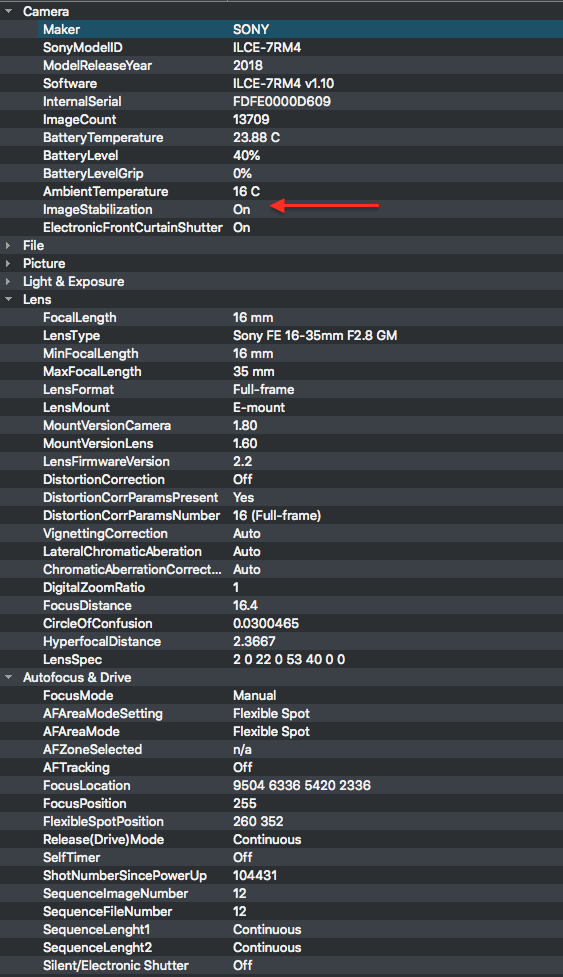 As I understand the original post, this is a composite of ~ 120 30second exposures. This appears to be an alignment issue between the exposures. IMO, either PS did a bad job of auto aligning the images, or you did not allow PS to auto align the stack (one or the other may generate a better result).

FWIW, Photoshop isn't the greatest software for doing image stacks. It can often do a decent enough job; but there is better software available for this.

There are many possible causes for there to be a shift in registration between frames; but IMO it is about impossible to eliminate all of them for 120 consecutive images with any conventional setup (tripod).

Not the answer you're looking for? Browse other questions tagged troubleshooting astrophotography stars or ask your own question.