Do I still need filters for photographing landscape under an eclipse, if I'm not zooming in on the sun itself?

Context: I find myself due to be in the path of the upcoming annular solar eclipse. This was unplanned and I am unable to get a proper filter delivered on time.

The general consensus on the internet appears to be that photographing an eclipse requires a solar filter, or at least a 16 stop, ND 100,000 filter, e.g.: https://www.bhphotovideo.com/explora/photography/tips-and-solutions/how-to-photograph-a-solar-eclipse

But it seems people frequently take photographs under a normal sun without apparently needing such extreme levels of filtering. Perhaps such advice is geared towards people trying to fill the frame with the sun using a super telephoto lens? It feels intuitive that aiming a telephoto lens directly at the sun would be more dangerous, like starting fires with a magnifying class.

Would this be different with 35mm or wider lens?

When using a solar filter and properly exposing to see details on the sun's surface, the only thing that is going to show up anywhere in the frame is the sun. Notice that there are no stars visible in any filtered images below. 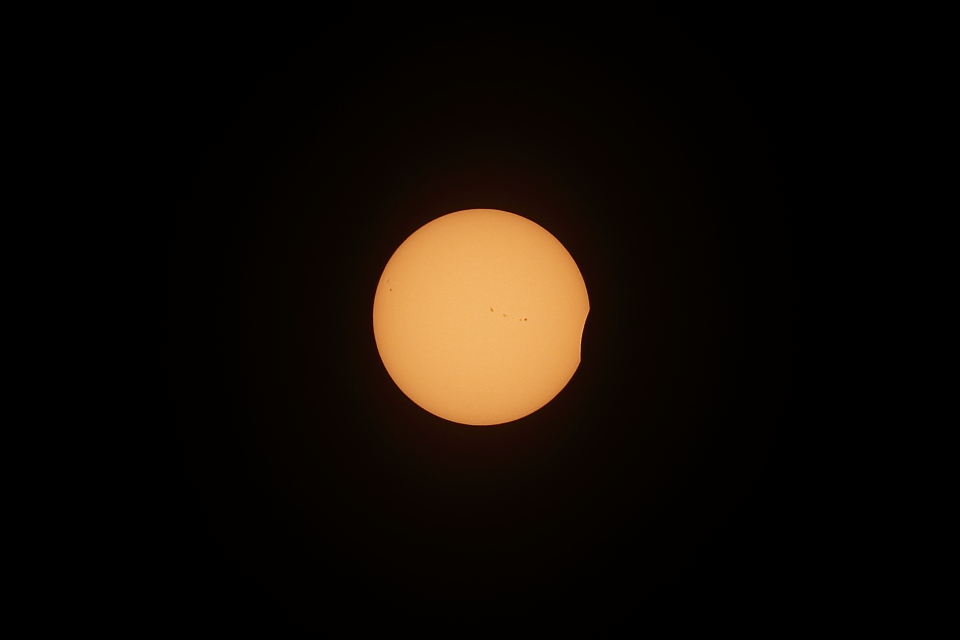 About an hour before totality as the Moon's silhouette is just beginning to move in front of the Sun. A solar filter was used with a 200mm lens (the image is heavily cropped to about a 900mm angle of view on a FF camera) on a 20MP APS-C camera. ISO 400, 1/500 second, f/5.6. The filter is providing about 15 stops of attenuation not only of visible light, but of infrared and UV as well.

Everything else will be entirely too dark. If you want to take photos of the landscape during an eclipse, you won't be able to use a solar filter unless you use exposures in the minutes-long range.

This unfiltered image was taken about two minutes before totality. ISO 1600, 1/100, f/4 That's EV100 = 7, about the same brightness as brightly lit nighttime streets or a stage show. In full direct sunlight the scene would have been about eight stops, or 256X brighter! 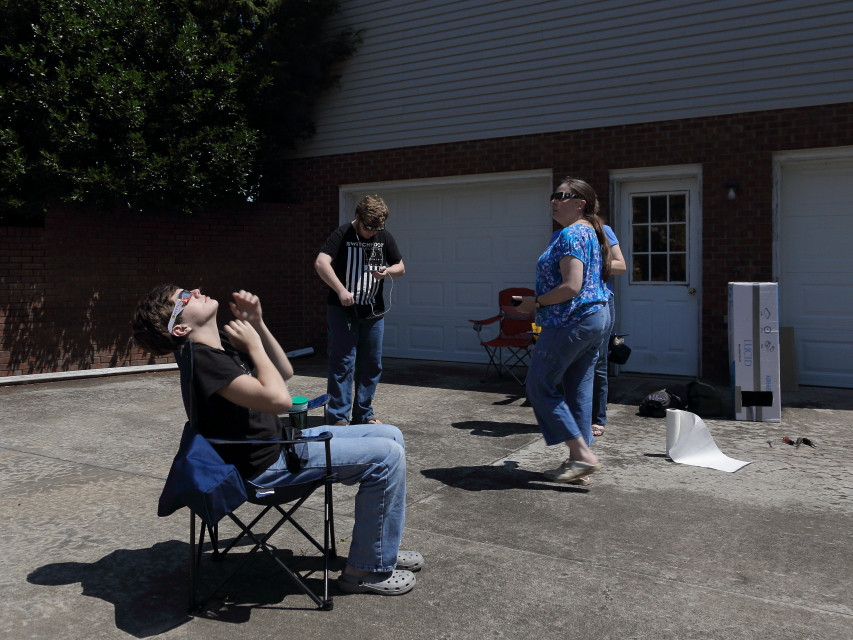 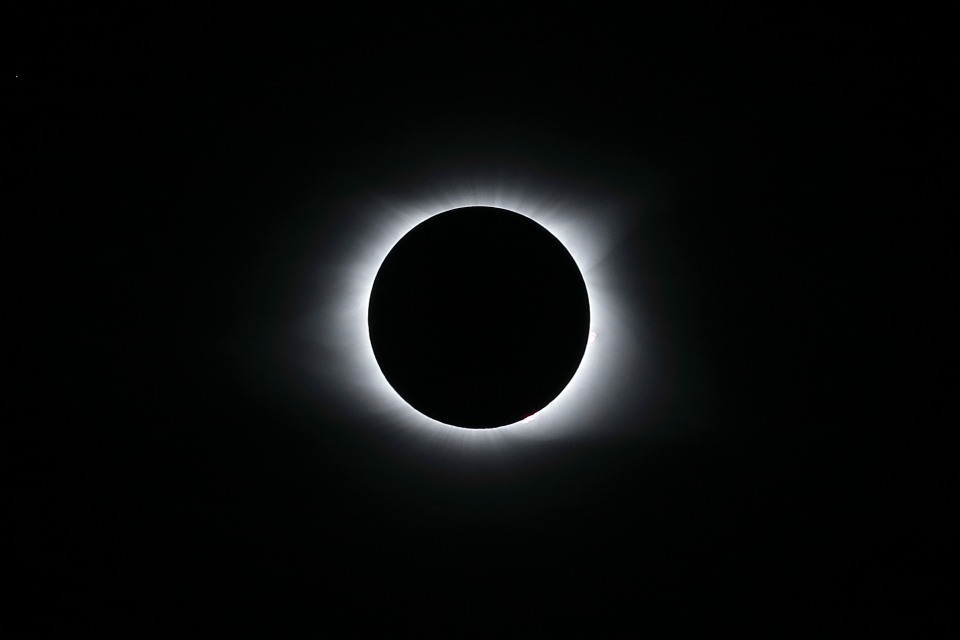 Below is an unfiltered image of the "Diamond Ring" that is visible just as the very first speck of the Sun's surface becomes visible after totality ends. Notice that the exposure is bright enough to see a bright star, Regulus in the constellation Leo, to the upper left of the Sun. 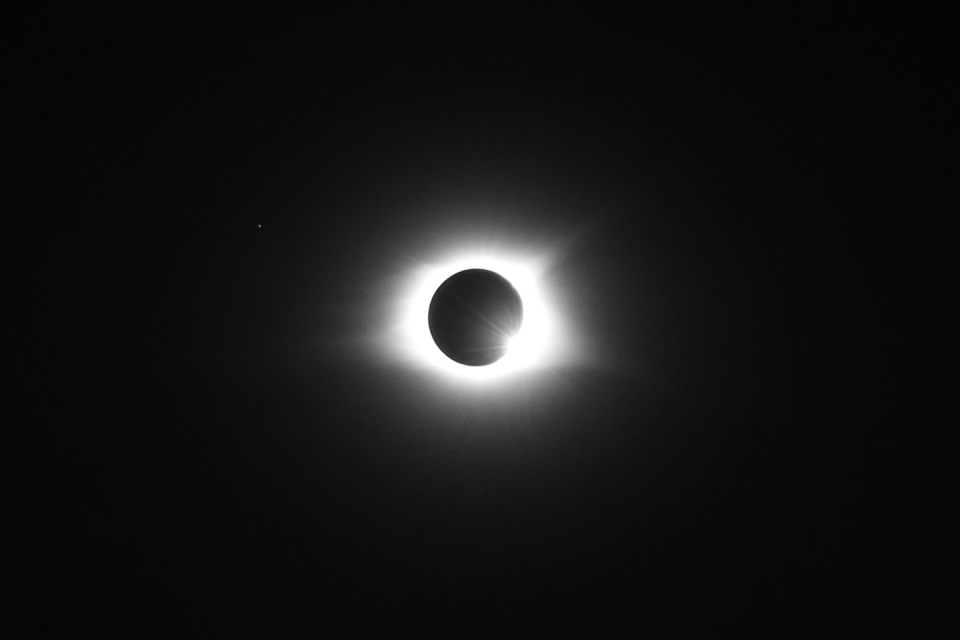 On the other hand, when enough of the Sun's limb is visible to see the "Bailey's beads", the sun is much too bright to be imaged without a filter. Below is a filtered shot taken just 24 seconds after the "Diamond Ring" image above! Most annular eclipses will be much brighter than this for the entire event. 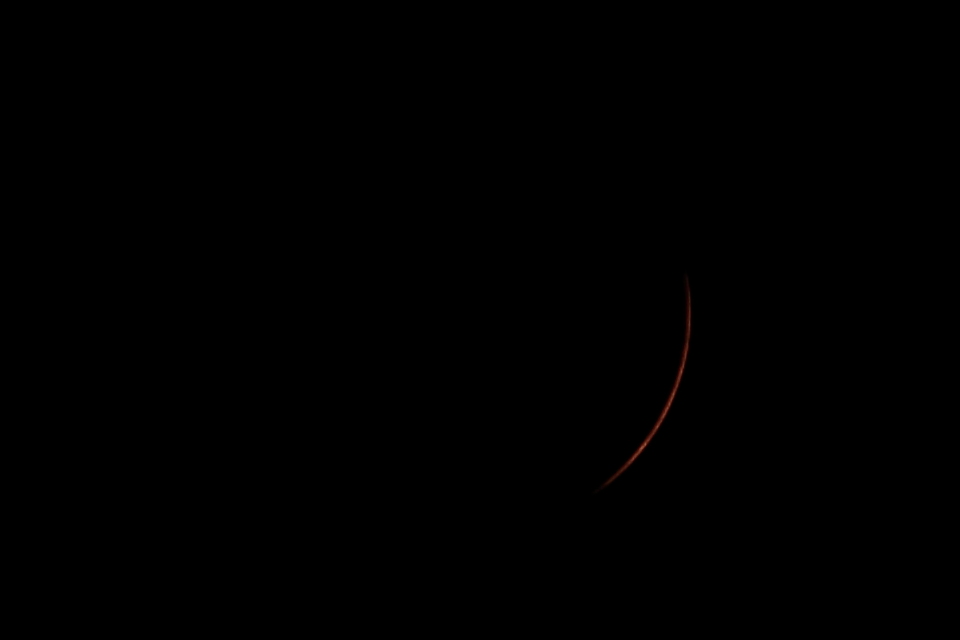 A ten-stop ND filter would probably make things worse. Why? Because many ND filters only attenuate for visible light wavelengths and do not attenuate infrared wavelengths, which is where most of the damage the sun can do will come from. With a ten-stop ND filter, you'll expose for ten time longer, thus subjecting your camera to ten times as much of the Sun's infrared energy!

Personally, I wouldn't include the sun when it is more than a few degrees above the horizon in any frame when using a 50mm lens, much less an 85mm.

It's usually fairly safe to photograph a scene containing the sun using a wide angle lens, say 35mm or wider on FF body, when using a DSLR or other camera that only exposes the sensor or film during the actual exposure. For mirrorless cameras, though, the sensor is almost always exposed just as it would be for a very long exposure and more care must be taken with regard to the sun.

As the focal length increases, more of the sun's energy will be collected by the lens. This means more potential for damage. 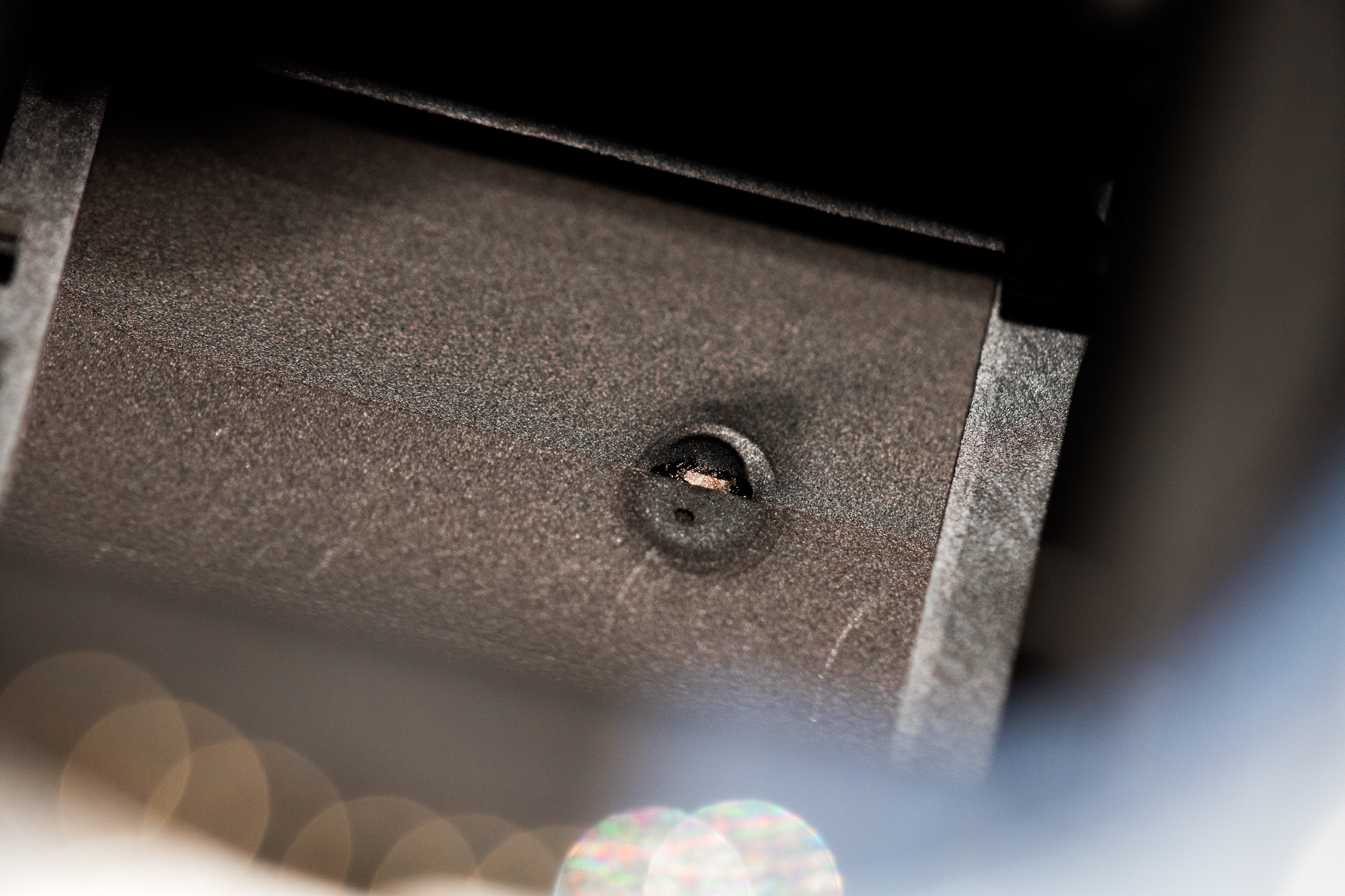 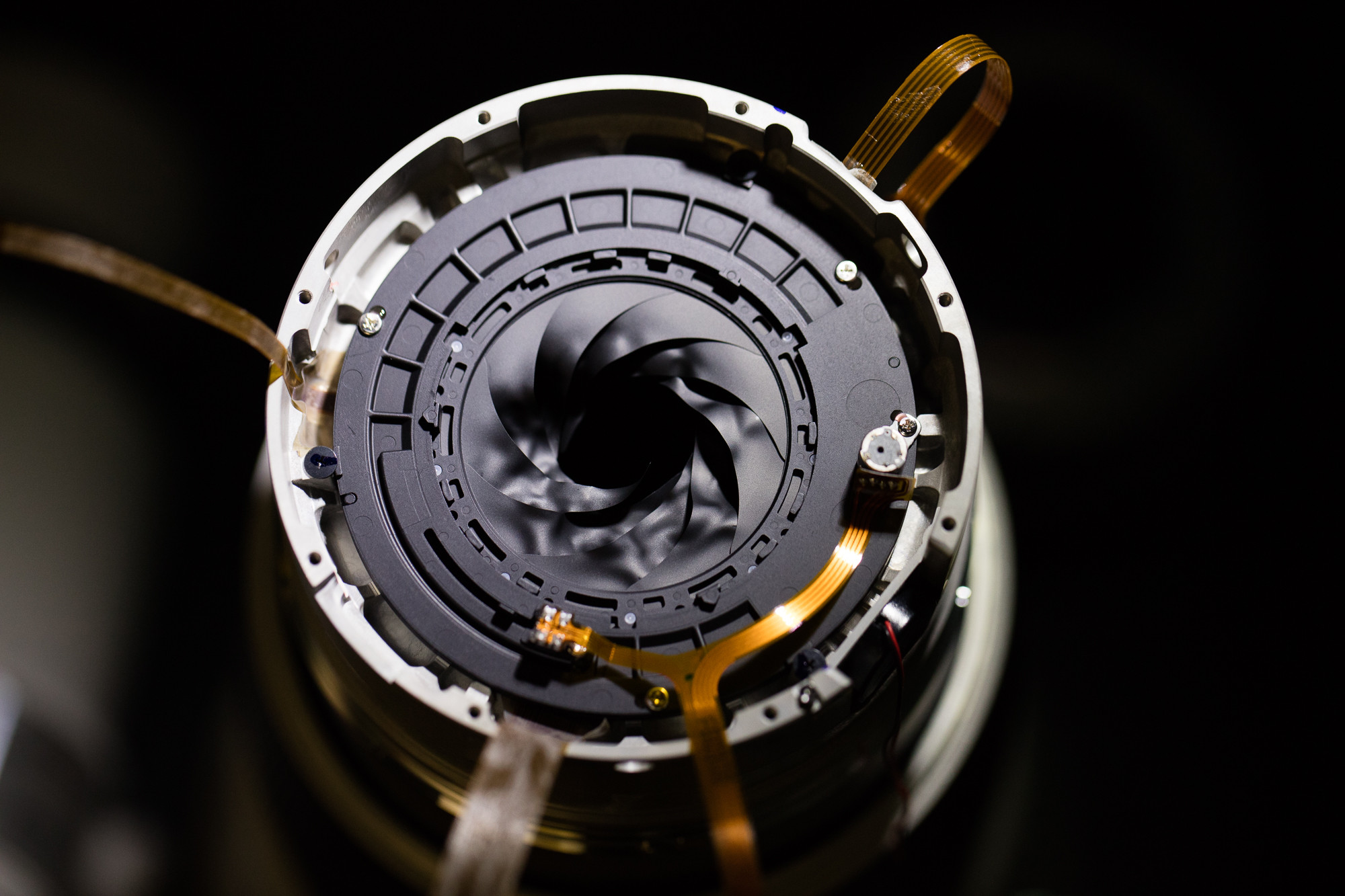 Not only can you damage your camera and/or lens, but you can also permanently damage your vision if using an optical viewfinder!

The links embedded above point to other questions we've had here at Photography SE that address most of your concerns. Let us know if you still have questions after reading them.

Yes, the (very strong) ND filter is needed only when shooting at the sun with a tele lens (which is what people are usually interested in during eclipses). It protects the camera & lens by keeping most of the light out.

But as you noted you can take picture of the sun in the sky without an ND filter (it is even frequent with wide-angle lenses), so you wouldn't harm your lens but in normal conditions the exposure time of such pictures is short. During an eclipse to get a sufficiently exposed landscape, you would need a long exposure with a very bright spot somewhere and this could harm your sensor. So it could depend on how annular the eclipse is and how long an exposure you need.

97
Can the sun damage the camera sensor? Under what conditions?
13
Can it be dangerous to look at the sun through the viewfinder?
3
Do you need a solar filter for a wide-angle camera?
3
At which focal lengths is it ‘safe’ to have the sun in frame?
0
Can it damage eyes and camera when taking photo from Nikon Coolpix B500 during 90-95% solar eclipse?

3
How do I photograph a landscape with a solar eclipse where the sun is not the main subject?
0
Telescope Solar Filters to fit Canon Lenses
0
What size Baader solar filter do I need and how do I use it on my Nikon D5300?
4
How can I get prevent ghost sun images when shooting with a solar filter?
3
Do you need a solar filter for a wide-angle camera?
13
What kind of filter do I need for safe sun photography?
2
What are some causes for an oblate image of the Moon during total solar eclipse?
2
Shooting Solar Eclipse with an ND 100000 Marumi - Mirrorless Camera