What type of projection system is used in Brideshead Revisited episode 5?

In the beginning of episode 5 of Brideshead Revisited there is a scene where one of the characters uses a "Universal Projector" to show some slides. It can currently be watched here, about 2m30s in.

What's confusing me is there are a couple times when the projector slide is flipped over to show a new image, when I would have though the image would just end up upside-down.

(Not the best example since the gif only shows one projection but it's clear from the narrative that two are there.)

On closer inspection there's no room for a light to project from behind the slides and I'm not sure the slides are transparent.

Here again the slide is first rotated to put it upright, then flipped over to show a different image: https://i.imgur.com/LMuPoGV.mp4 (too big for SE)

What type of projection system is this?

This is an opaque projector (Wikipedia). The image of the illuminated photo print, postcard, painting, etc., is projected through the lens to the projection screen. A slightly different geometry, for greater magnification, is used to project art onto screens or walls for tracing or copying the image. Artigraph is a brand of these copying opaque projectors.

According to the Wikipedia article, projectors used to be divided into two classes: diascopes, where light shines through transparent slides; and episcopes, where light reflects off opaque prints. Thus, opaque reflectors are also known as an episcopes.

Episcopic projection is much less efficient (i.e., requires a more powerful light source) than diascopic slide/transparency projection. And because the power of light sources directly corresponds to the heat produced by them (especially with the pure incandescent or flame generated light used back in the day), and the need to protect the opaque image from the generated heat, this limited the usefulness of episcopic projectors. For equivalent power light sources, opaque projectors were dimmer than slide projectors, and therefore could not accomodate larger screens so large numbers of people could view them without being too dim.

The site Luikerwaal.com is dedicated to Magic Lanterns (Wikipedia), with lots great examples, including several episcopes and epidiascopes (convertible, able to show opaque or transparent sources). Interestingly, they have an image of an old advertisement for a "post card magic lantern", suggesting that at the time of the ad, all projectors were types of magic lanterns. 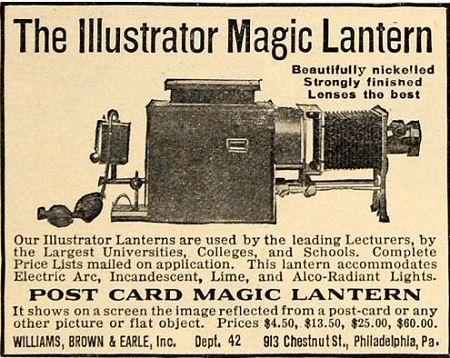 Advertisement for a "post card magic lantern", from Luikerwaal.com

It is called a "Lantern Slide" projector. Going back, perhaps 100 years, positive images were prepared, not on film, but on glass plates. These were projected for an audience via a projector that initially illuminated via gas light or other combustible. The next iteration used electric light bulbs.

This projector is also commonly called a "Magic Lantern".

Not the answer you're looking for? Browse other questions tagged history equipment-identification projection or ask your own question.

4
What process was used to make this glass plate?
3
What mount system is this Hanimex zoom lens?
3
What mount system is this Raynox lens?
2
What type of lens element is this?
9
What is the crank on the side of this lens used by David Douglas Duncan?
0
What JPEG settings for projection with Epson EH-TW5210?
2
What camera and lenses are shown in The Office (US) season 2 episode 21?
1
What type of quick release do I need for this Sunpak tripod?