Upgrading camera or lens or both for landscape? [duplicate]

When taking a landscape photo with a deep depth of view, the image is not sharp, especially the further away it is. Up close sharpness is fine but not far away. I am using the correct aperture and have a sturdy tripod.

I am currently using a Canon EOS 4000D with its 18-50mm kit lens. I believe this camera has crop sensor, and I am looking for a upgrade that will give me better quality, whether its upgrading the body, lens, or both.

Is it true that full frame sensors have better quality than cropped sensors?

There can also be issues of unrealistic expectations, even when using the best gear available. All gear has limits, no matter what the marketing departments may say about their latest, greatest, most expensive new lens or camera.

This answer to Zoom or Prime Lens(es) for Wildlife Photography on Limited Budget (Nikon D500) says:

The truth is there are a lot of things many photographers would like to do that no camera/lens has the capability of doing. The thing that separates the great 'Photographers' from the complainers who always blame the limitations of their gear for their work that doesn't meet their lofty expectations based on the marketing hype machine of the camera makers is that the 'Photographers' learn to push the limits of the gear at their disposal while also finding ways to work just within those same limits.

Upgrade neither until you are sure you don't need to upgrade your photographic technique first.

Please don't misunderstand this as flippant or taking a cheap shot at a budding photographer. It isn't. It is an encouragement to decide to put in the learning and practice to develop the technique and compositional skills that better images truly require, rather than chasing better image quality through endless GAS (Gear Acquisition Syndrome).

It's covered in much greater detail in this answer to How to improve image sharpness on Canon 700D? and it would be a bit redundant to repeat that entire answer here, though most of it would probably apply to your current situation. We'll hit a few of the highlights:

Most new photographers benefit far more from improving their knowledge and skill than they do from an incremental or even quantum upgrade in the gear they use.

This answer to When should I upgrade my camera body? applies equally to lenses, lights and modifiers, etc. as it does to camera bodies. Until you can identify what is causing your images to fall short of what you wish them to be, you're not ready to identify what solution will be most likely to allow you to reach your goal.

As the accepted answer to Is replacing all my Fujifilm gear with this Canon zoom lens an upgrade? says:

While it is true that better gear won't make you a better photographer, it is equally true that any photographer is limited by the capabilities of the gear being used.
There's an old saying that has been around photography for a very long time:
Gear doesn't matter.
It's certainly true, but it is only half the truth. The rest of the truth is this:
Gear doesn't matter - until it does.
When the technical capabilities of your gear are not up to the task for the shots you want to capture, then and only then will the gear matter.

Better results would be obtained by switching the lens rather than the body but for even more improvement you can upgrade both.

The kit lens just never gets very sharp. It starts off extremely soft and becomes more reasonable stopped down but it reaches the diffraction limit quickly which reintroduces softness. A better lens, either a high-quality constant aperture zoom or a prime lens easily produces better results. Because of quality is limited by the lowest factor, getting a better camera will not significantly improve sharpness without changing the lens.

There are far better lenses from Canon and third-party manufacturers. Sigma makes extremely sharp lenses, often for cheaper than the first-party equivalent, plus some unique offerings. Keep in mind that the better lens for you will depend if you keep the camera, change to another camera with the same sensor-size or to one with a larger sensor.

Upgrading to a larger sensor will lead to a more significant jump in image-quality. In this case you should highly consider other systems because many can produce sharper results because they omit an anti-alias filter and have lower noise-levels. So, yes, a larger sensor will give better results than you current cropped-sensor DSLR.

Keep in mind that full-frame cameras and Medium-Format ones are not only larger themselves but their lenses are too, plus heavier, so be prepared to carry that extra bulk to capture the landscapes you want. Mirrorless can save you some size, mostly in the body because lenses themselves are not significantly smaller compared to SLR ones for the same sensor size.

The best image-quality I have even seen is from the Fujifilm GFX-50R with the Fujinon 23mm F/4R. It is huge and heavy but that's what I would recommend if you don't mind the bulk and price. Going smaller and saving a good amount of money, I was extremely pleased with the Nikon Z6. It's a full-frame mirrorless with few native lenses but they are superb and the sensor is very sharp with extremely low noise.

You can actually read the review of the Nikon Z6 that I published on my site. There is also a review of the Fujifilm GFX-50R and both have a gallery of full-resolution images you can see to for real-world examples of their image-quality. There are certainly many options in between depending on your budget and desired print sizes.

What to do is up to you. I would do the following:

Is it true that full frame sensors have better quality than cropped sensors?

For sensors with the same resolution (megapixels), full-frame sensors are able to produce images that appear sharper because the sensels are larger. The difference is approximately proportional to the crop factor. Suppose a lens that resolves about 65 lp/mm is suitable on a given full-frame camera. The crop-sensor camera would require 104 lp/mm to produce an image that appears just as sharp.

Similarly, low-light performance of the full frame sensor (again, same resolution/megapixels) would be improved because of larger sensels, proportional to the crop-factor squared (~2.56 for Canon, ~2.25 for other brands). This is the approximately one-stop difference in ISO performance that people often refer to when comparing full frame with crop sensor.

However, if the pixel density of the sensors is the same (same sensel size, different resolution/megapixels), there are no advantages as far as sharpness and low-light performance are concerned. (Assuming no other technological differences between the sensors.)

When taking a landscape photo with a deep depth of view, the image is not sharp, especially the further away it is.

Optimal lens performance is usually with the aperture stopped down 1-2 stops. On your zoom lens, that would be ~F5.6-8 at the short end, and F8-11 at the long end. However, when apertures are smaller than F8 (larger F numbers), diffraction tends to introduce noticeable softness.

To determine the lens parameters that would result in the "same" captured image on a crop-sensor camera (vs full-frame), divide the focal length and aperture by the crop factor. Suppose you want results that look like 50mm F11 on full frame, you would need a 31.25mm F6.875 lens on crop sensor. Since the aperture is wider, you avoid diffraction that typically accompanies F11. Crop sensor may be considered "better" in this case because it allows the use of wider apertures to obtain the same DOF.

You may have better results with different lenses. Primes are usually considered good choices. However...

Your camera has an antialiasing filter that intentionally blurs the image to prevent moiré, which is typically not a significant issue in scenes that lack artificial patterns, such as fabric textures.

Here is a sample image showing the difference between cameras with and without AA filter using the exact same lens (EF 40/2.8 STM) and exposure settings. The difference can be seen even at reduced resolution in the thumbnail. (So it's not necessarily true that sharpness doesn't matter when reducing image sizes for the web.) 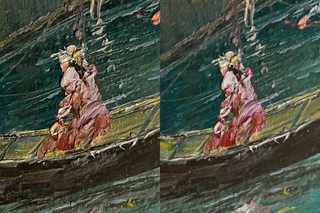 31
Why are my photos not crisp?
2
How to improve image sharpness on Canon 700D?
17
Is replacing all my Fujifilm gear with this Canon zoom lens an upgrade?
21
When should I upgrade my camera body?
4
Will switching from Canon to Nikon as a way to improve image quality make my stock images saleable?
3
Will I see enough improvement moving from EF-S to “L” lenses to warrant the cost?
3
Zoom or Prime Lens(es) for Wildlife Photography on Limited Budget (Nikon D500)
2
Why are landscape photos “subpar” on Canon EOS 750D with Sigma 17-50/2.8 lens?