Which of these ND filtered images do you think is more accurate? (sample images included)

As a followup to my previous question; there has been interest expressed in the results of my ND filter tests.

First, I should clarify that the heavy color cast shown in that post was from a single coated B+W filter (6-stop) purchased 5 years ago (77mm, not that it matters). I don't know if it was counterfeit, but it was obtained from Amazon (not a reseller).

Here are the raw images from a new test I did, shooting 4 different angles in the mid-afternoon using 3 test cases at each angle:

I spent a few hours analyzing this data. My conclusions:

1) X-Rite Camera Checker is significantly better than Adobe's alternative, in terms of consistency and correctness. Using X-Rite, I was able to make filter and no-filter shots look pretty much identical, and also realistic. The Adobe profiles tended to be far more saturated. Possibly more visually pleasing, but probably not accurate, and also not quite consistent; they didn't always make filter version look the same as no-filter.
2) The B+W and Breakthrough filters both seem pretty good in terms of color cast. They both have maybe a very small cast (nothing as bad as my other single-coated B+W) that is easily corrected but also barely noticeable if uncorrected. I think the B+W leans warm and the Breakthrough leans cold, but I'm not sure. If forced to choose, I think the B+W is slightly better (smaller cast, and I prefer warm). I like the ergonomics of the Breakthrough (the knurling around the outside of the ring), and I like that it's made in San Fran near my home. But I dislike that it's a new unproven company, and I also dislike that it seems slightly more optically dense than the B+W (no idea which one is actually closer to a true 6-stop, but I'd rather err on the side of too fast at this level). I'll probably return the Breakthrough and keep the B+W (and also replace my old 77mm B+W with a new MRC Nano).

I'm curious what others' conclusions are on my points above, i.e.
1) X-Rite vs Adobe
2) B+W vs Breakthrough

EDIT: Per request, here are some renders from my machine. I've only included the 4th angle of all my raw shots, since it contains the most variety of color and objects behind the passport.

The 3 rows, top to bottom are:
No filter
B+W filter
Breakthrough filter

Also note that with with every render, I clicked "auto" in ACR. I suspect this may cause some controversy, but at best it fixes any small exposure differences. And it does seem fairly consistent in how it operates... whatever criteria those are. Also note that this did not radically change the deltas between the results. Even at "default"... the results are the same... but the exposures all look slightly off.

So... since I prefer the X-Rite results, that means I'm focusing mostly on the right column. Within that column, I'm trying to figure out which of the two bottom cells (filtered) most closely matches the top (unfiltered). And I think that is the middle cell (B+W), barely. 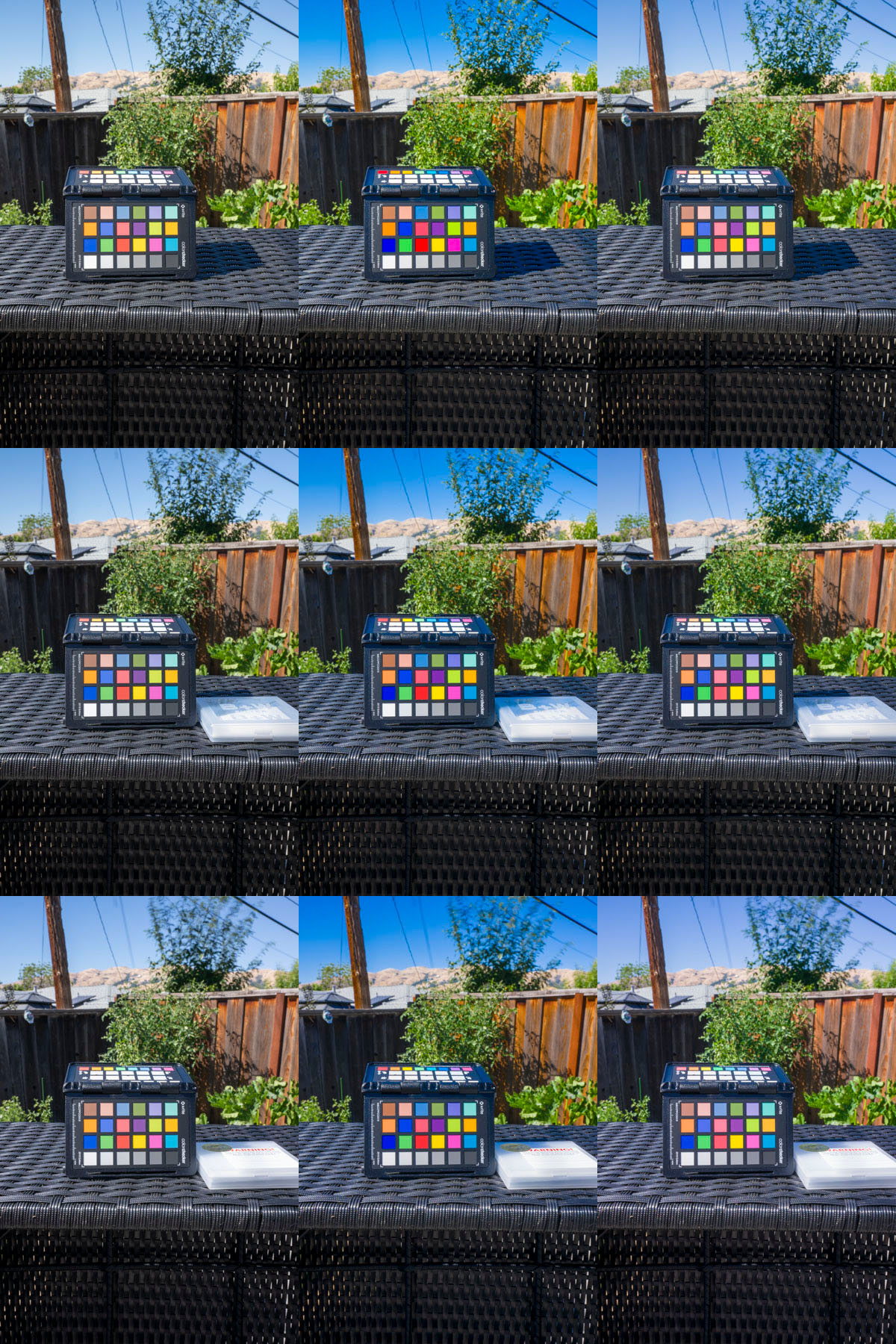 As you can see, with proper color management, the different tints of each filter do not significantly matter. Both filters can be properly corrected to match a calibrated image with no filter. That's because your color management software is adjusting each one differently to give the same result based on what it thinks the color should be.

The most obvious differences in the sample images are that, for whatever reason, the images made using the DNG Color Profiler are much more saturated than the images made using the Adobe Standard and X-Rite Color Checker Profiles. Those two are probably more accurate renderings of the scene than the DNG Profile. It's fine if you want to boost saturation as you process raw files, but it's usually better to get as accurate a rendering as possible with the color profile applied and then increase saturation later in the process.

Also note that with with every render, I clicked "auto" in ACR. I suspect this may cause some controversy, but at best it fixes any small exposure differences.

In the far left column, whatever minor differences there are almost certainly more attributable to the differences in the scene (no filter box, filter box with mostly blue and white colors both in sunlight and in shade, filter box with red, gold, and white colors in sunlight and shade) than the differences between no filter, the B+W filter, and the Breakthrough filter. The entire contents of a scene can affect the Auto White Balance function of the Adobe Standard Color Profile, which analyzes the entire scene and attempts to set color temperature and tint based on clues in the scene.

In the middle column you've used Adobe's DNG color profiler, which should be based on a color profile you created/edited. If you didn't edit anything in the DNG Color Profile, it's still using the default color profile for your specific model camera and, again, guessing at what part of the image should be neutrally white or gray. I assume you used the color checker with the color profiler to create a custom profile? I've never used DNG files or created a color profile in Adobe (I use different raw conversion tools).

Not the answer you're looking for? Browse other questions tagged white-balance color-correction neutral-density colorchecker or ask your own question.

90
What does an unprocessed RAW file look like?
17
RAW files store 3 colors per pixel, or only one?
11
Why can software correct white balance more accurately for RAW files than it can with JPEGs?
4
For a given lens/camera, will a ND filter always need same WB correction in all conditions?
3
How to use X-Rite ColorChecker with Sony a7R IV?

2
Do I have to do camera calibration every shoot?
2
Where can I buy a 77mm 12 - 15 stop ND filter at a reasonable price.
4
How to deal with fabric colors? Studio strobe lighting
4
Colour Workflow A - Z
1
I have an image that contains a color target, how can I print it in order to get faithful colors?
1
It is necessary to create your own profile for camera in product photography?
7
Xrite Colorchecker color specifications and 18% reflectance gray card
4
For a given lens/camera, will a ND filter always need same WB correction in all conditions?
3
How to use X-Rite ColorChecker with Sony a7R IV?
3
Can't get the right colors when shooting art. Looks pale even with ColorChecker Passport