Why do Bayer images of total darkness contain stripes?

The following is a raw Bayer image from a Raspberry Pi's camera (v.2):- 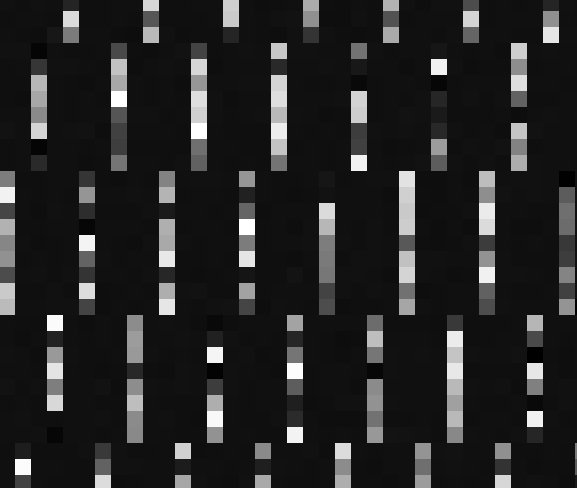 It was taken in complete darkness, so the image simply represents all of the various noises that accumulate on a CMOS photo sensor. The command was raspistill --nopreview --ISO 800 --raw -o noise.jpg.

The data was imported into GIMP as greyscale (256 shades/byte) so we have one grey block per byte (not per pixel as the Bayer data is 10 bit). It kinda shows the values of the individual bytes. You can see that there are strips of colour separated by much darker regions. If we then perform a graphic equalisation on the image, we get:- 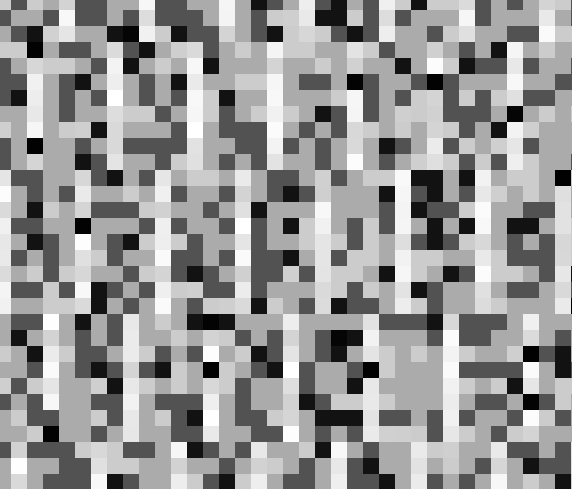 You can see that the dark regions do contain information.

Q. Given that sensor noise affects all sensor sites equally/randomly, why does the raw unprocessed Bayer data have such prominent vertical stripes?

You're interpreting the raw data wrong. According to the PiCamera documentation, the Pi's 10-bit raw data is encoded as 5 bytes in the following manner:

So, if you just try to view the raw data in a regular image viewer (which you shouldn't), you'll see a each 5-byte block as a row of 5 pixels:

Because you took a mostly dark image, the first 4 bytes of data, representing the high-order bits of each of the BGGR sensels, is mostly black / dark gray. There are probably several nonzero values in the data, but not much beyond probably bit 3 or 4. Most of the noise was in bits 1 and 2 for each sensel, which all just happen to be packed into that 5th byte of the raw data.

So, to your question, "Why do Bayer images of total darkness contain stripes?", they don't. The vertical stripes are just an accident of showing an array of data structures as an image. The raw data is not meant to be viewed directly, without parsing or processing it first. I suggest using a utility such as raspiraw, or use Picamera and follow their Raw Bayer data captures guide.

Your premise is wrong and lies already in the definition of noise. if it would affect all sensor sites equally, it wouldn't be noise but only an offset.

Noise means that some more-or-less random value is added to the signal, different for each sensor site. That's what makes it so hard to remove. see What is noise in a digital photograph? for an explanation of the different noise types in a digital sensor.

If the images really show one block per byte of a file with 10 bits per pixel, iterpreting it becomes kind of difficult, it would be more interesting to see a correct raw conversion pre-demosaicing like dcraw -E does. This would show the actual noise pattern, as the current image is simply an artifact of the raw file layout according to @scottbb 's comment.

Given that sensor noise affects all sensor sites equally/randomly, why does the raw unprocessed Bayer data have such prominent vertical stripes?

As @scottbb already explained the RAW format layout and why this creates the striped (in the chat session), you should know now that these are just low level "noisy bits" from four sensor sites (BGGR) combined into 8-bit values and displayed as such - they would have quite random values.

As for graphically equalizing using GIMP, as you're doing is amplifying the low level signals in the JPEG all the way up to maximum spreads. That will seem very much like noise, unless there was a very strong pattern there to start with. Equalization is a pretty extreme adjustment and I've never found a good use for it personally.

As you shot in the dark, what you're basically seeing is noise amplified.

If you want to see what the sensor actually detects as a proper image then you need to convert the RAW image normally and adjust the tone curve or exposure in post (using a RAW converter, not GIMP, which won't treat the pixel group data properly).

Not the answer you're looking for? Browse other questions tagged noise bayer raspberry-pi or ask your own question.

31
What is noise in a digital photograph?

6
Why is a Bayer filter with three colors(RGB) preferred over one with two colors and unfiltered (RBNeutral)?
4
Why do RAW images in Darktable have a lot of noise?
0
Why do exported image contain colored grains/noise when viewed in GNOME Image Viewer?
7
Why is the IR filter present when there is already the Bayer filter on an image sensor?
5
What is causing these stripes in my images?
1
Why am I getting horizontal stripes/bands on sensor?
1
Why does zooming into JPEG images show chunky boundaries and or noise resembling smudges of magenta, yellow and cyan?