What is the effect of relative size of light source vs diffusion on the quality of light?

I have used large softboxes for my portraiture quite a while with good success. However, I come across the topic of diffusion vs size of the light source quite often.

While I know, that the relative size of the light source has profound impact on the softness of the light, diffusion is randomly thrown into this as well.

I see a lot of fashion shooting to use a huge reflector, but without any diffusion. However, as the shape is not completely used as a perfect focus, the light will get some diffusion just by the reflection patterns, I guess. So that would provide some middle ground between harsh and soft.

So it seems that you have to have at least some diffusion going on, otherwise you cannot get the relative size to become relevant.

Can anyone elaborate in-depth how diffusion and relative size affect each other?

Relative size (distance) is often correlated with diffusion/softness, as if the only thing you have to worry about/change is the distance of the light/modifier... which is wrong because distance significantly impacts the light output requirement, the resulting light falloff, and significant characteristics of the resulting image.

Using modifiers/diffusion is also commonly referred to as "making the light source larger." This is also wrong. What diffusion actually does is break a singular strong light source into a much greater number of smaller/weaker light sources... and it is the position/angle from which those smaller light sources see the subject that allows them to see/light around edges, creating the "soft light" wrap/fill effect.

But if the diffusion is placed far enough away to where the angle is too shallow for them to see around edges (~4x the modifier's size), then only the parallel rays see the subject and it will again be "hard light." 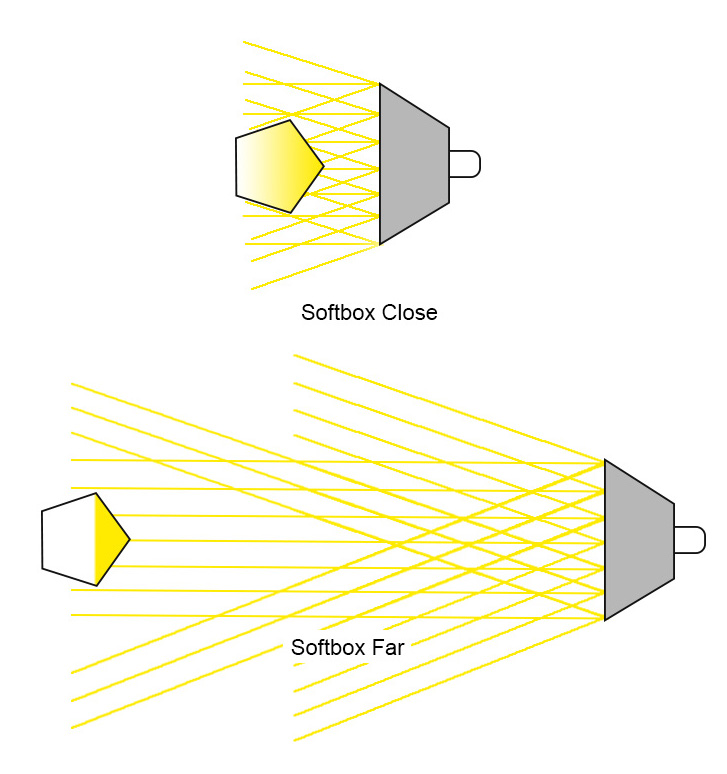 Thinking of a softbox as a larger array of light sources, rather than just a singular/larger light source, also helps to make more sense out of techniques like feathering the softbox, crating/using uneven diffusion, etc...

Likewise, because the diffusion is creating a greater number of light sources; it is moving farther away from being a point light source and it won't exactly follow the Inverse Square Law... especially at much larger sizes/shorter distances (but the ISL is usually still close enough to be useful).

Diffusion isn't an absolute requirement for "soft light", e.g. a bounce umbrella also breaks the light into many more light sources that can see around edges.

A "larger light" has the concept that its outer areas will direct the light inward into the subject. Those additional paths inward from wide and different angles of course help to fill the harsh shadows from other paths, hence greater softness. The multiple angles do this.

Diffusion can be good too, but a "diffused light" merely scatters the light, mostly outward, that part missing the narrow subject. Outer areas will somewhat scatter inward, but less percentage than a directed larger light like the umbrella or softbox. This is of course also true of any more distant light, which is seen relatively smaller and much more misses the subject.

Not the answer you're looking for? Browse other questions tagged lighting light softbox diffusers softness or ask your own question.

6
To what extent, and how, does light source affect sharpness?

4
Does the internal structure of an umbrella-type softbox impact light quality?
1
Light source types and which ones to use
1
Why does feathering the light gives softer light?
1
What's the use of light source directly above model's head?
6
To what extent, and how, does light source affect sharpness?
1
Lighting the inside of an incubator
1
What are the characteristics of light?
1
What size is the light beam angle from typical flashlight?
4
Light source giving wrong color