After some difficulty, I managed to obtain a 1L CS-41 development kit from Cinestill. Unfortunately, since it is a power kit the stabilizer packet is not included in it. My previous kit from Unicolor had it which was a good thing. So, now I'm on the lookout for a stabilizer. I'm assuming my Kodak Photo Flo is only meant for a B&W film or can it be used for color films also? After some search, I found this Kodak Flexicolor SM (C-41SM) Tank Final Rinse stabilizer. It is a liquid that can be used to make a 5L solution and it's not very expensive either. Has anyone here tried this product? After I get some feedback from you guys I'll get one soon. 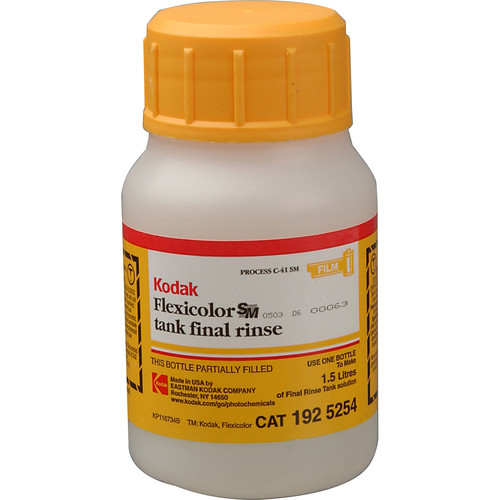 kodak processing
Share
Improve this question
asked May 4 '20 at 19:32

It will work just fine! Initially, C-41 film stabilizer was a surfactant (FhotoFlow) plus formaldehyde. The formaldehyde acted as a biocide to preserve the film from attracks by mold and other beasties. Secondly, the formaldehyde formed a peptide bond. Film uses a binder of gelatin to glue the light sensitive goodies and the dyes to the film base. Gelatin is an organic, made from animal bones and connective tissue. As such it is food for bacterium. The dyes are also organic, they are oily globules. Under the microscope, gelatin resembles spaghetti. The peptide tacks the spaghetti stands together at places where they overlap. This restrains the dyes preventing them from being mobile. As time passed, the formaldehyde was labeled a carcinogen. Color films were modified so that only a biocide plus surfactant did this trick. A modern C-41 rinse does this deed; it contains the surfactant plus a mild biocide similar to that found in antibiotic hand soap.

Not the answer you're looking for? Browse other questions tagged kodak processing or ask your own question.