How to use lenses from Chinon CS-4 on Canon DSLR?

My wife has a Canon EOS 750D. She only has 2 lenses for it and has been talking about getting more.

Today, I was at my mum's place and she had these old lenses from a Chinon CS-4. Are these lenses able to be used on the 750D?? If they can, what specific adapter would I need to get? 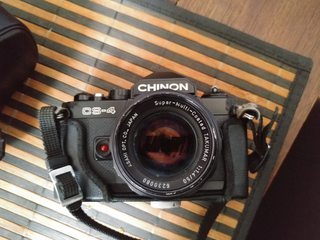 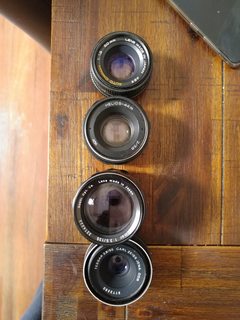 The Chinon CS-4 has an M42 screw mount. M42 lenses can be used on Canon DSLRs with an M42-EF adapter, which cost around $20. (Cheaper from China, but international shipping may be unreliable at this time.)

Aperture and focus would be controlled manually. You may also need to control shutter speed and ISO manually. Live View previews may not reflect captured images.

Some of the lenses you have were made for different mounts, and some M42 lenses need slightly different adapters. Since you don't show the mounts, they may not all work with the same adapter.

Could you use lenses that fit a Chinon CS-4 on a Canon EOS 750D?

With an M42 → EF adapter you could. But there would be significant compromises. There would be no autofocus. There would be no auto exposure. You'd need to select both shutter duration and ISO manually on the camera and aperture manually on the lens. Since the camera would have no way of communicating with the lens, it would not know what aperture the lens is wide open, nor what aperture it is set to. Some higher end Canon bodies would allow you to manually tell the camera the aperture selected on the lens, but without that, you're not going to get accurate exposure metering. So you'd probably also need an external light meter.

Four of the five lenses shown in the photos are 50mm or 58mm. You can get an EF 50mm f/1.8 STM that will preserve the camera's ability to autofocus and auto expose for a little over $100. That's not a LOT more than a high quality M42 → EOS adapter. And don't even think about getting a decent light meter for anywhere near the remainder after you buy an adapter.

So the question is mostly would it be worth the hassle of full manual exposure without accurate metering and manual focus to use the 135mm f/3.5 with an adapter?

Maybe it would, but there are also some pretty good copies of the older Canon EF 135mm f2.8 (with soft focus mechanism) still floating around for less than $200. In return you get AF, communication between the camera and body for exposure purposes, and a pretty good lens. The Soft Focus feature can be adjusted to "None" or to a weaker and stronger effect. It's very handy to have for several kinds of portraiture.

Not the answer you're looking for? Browse other questions tagged canon lens-mount lens-adapter old-lenses or ask your own question.

28
Can I use lens brand X on interchangeable lens camera brand Y?

8
Why are Canon and Nikon the biggest camera manufacturers?
6
How can I use Pentax lenses on a Lumix FZ18?
4
Will Canon's EF and EF-S lenses work better for Canon's mirrorless cameras than mirrorless cameras from other brands?
2
What adapter do I need to mount lenses for Chinon CM-5 on my Canon EOS 1100D?
2
Can I use a Speedbooster with a Canon EF-S DSLR?
2
How to mount a Kodak Vest Pocket lens on an EF-M camera?
2
Can I use APS-C Pentax K mount lenses on Canon EOS 90D?
1
APS-C lenses on full frame Mirrorless bodies