I just wonder if anyone could shed any light on this puzzle. Two nights ago whilst I was out photographing the Lyrids meteor shower from the UK something else showed up on my images when I checked them the next morning. All images were 30-second exposures at ISO 2000 shot throughout the whole night with the intervalometer. It takes roughly two minutes for a satellite to pass through an image, so that's four images which you can see when viewing the images. This started just after 01:00 and disappeared from the frame at 01:25. Upon going through further I have a small speck starting from the top of image which continues through the image for 41 images; doing the maths, that's 20 minutes of something passing through the sky slowly. It never continued all the way through, just slowly got darker. I was obviously set up towards the star Vega and the Lyra constellation. Any help would be greatly appreciated. 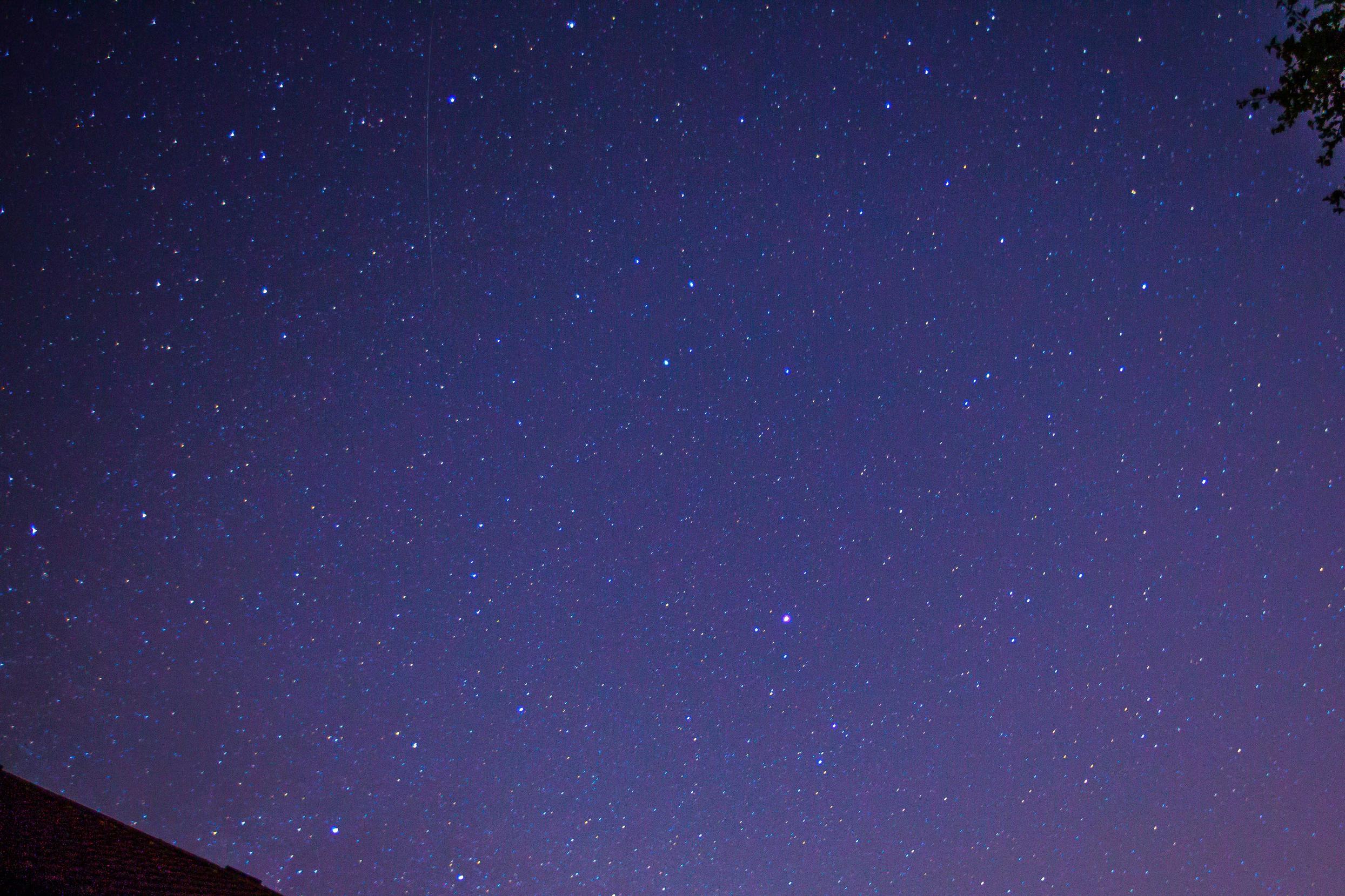 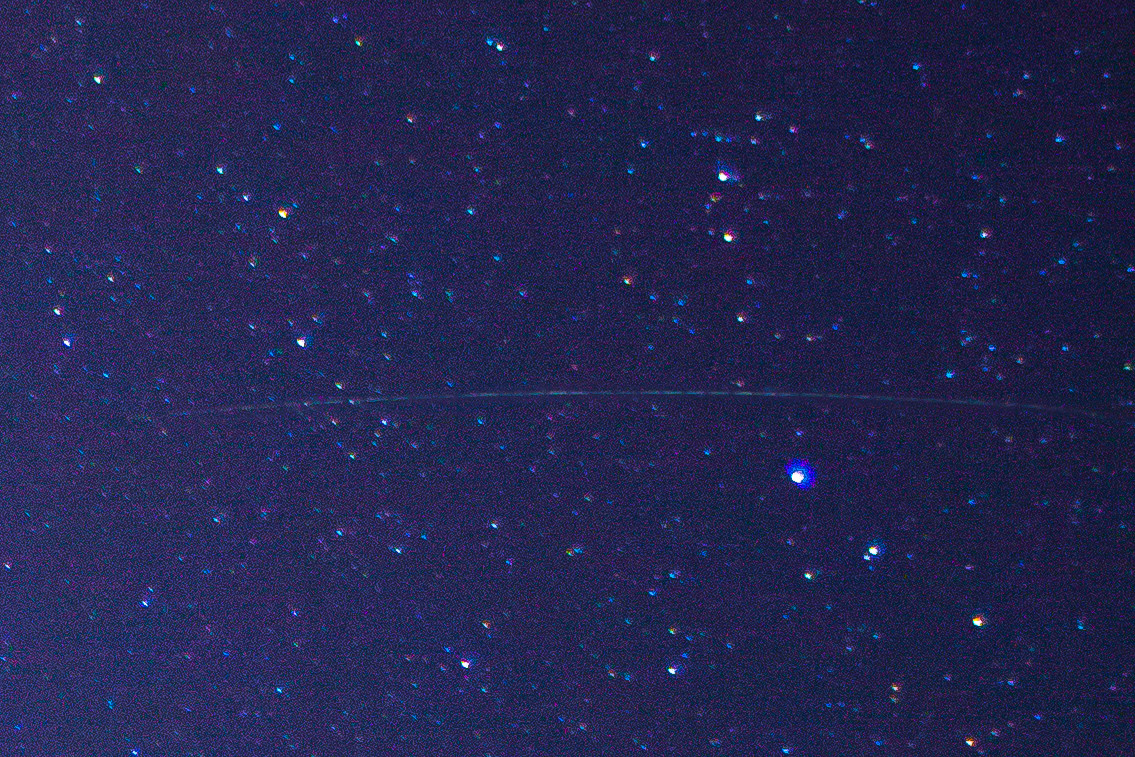 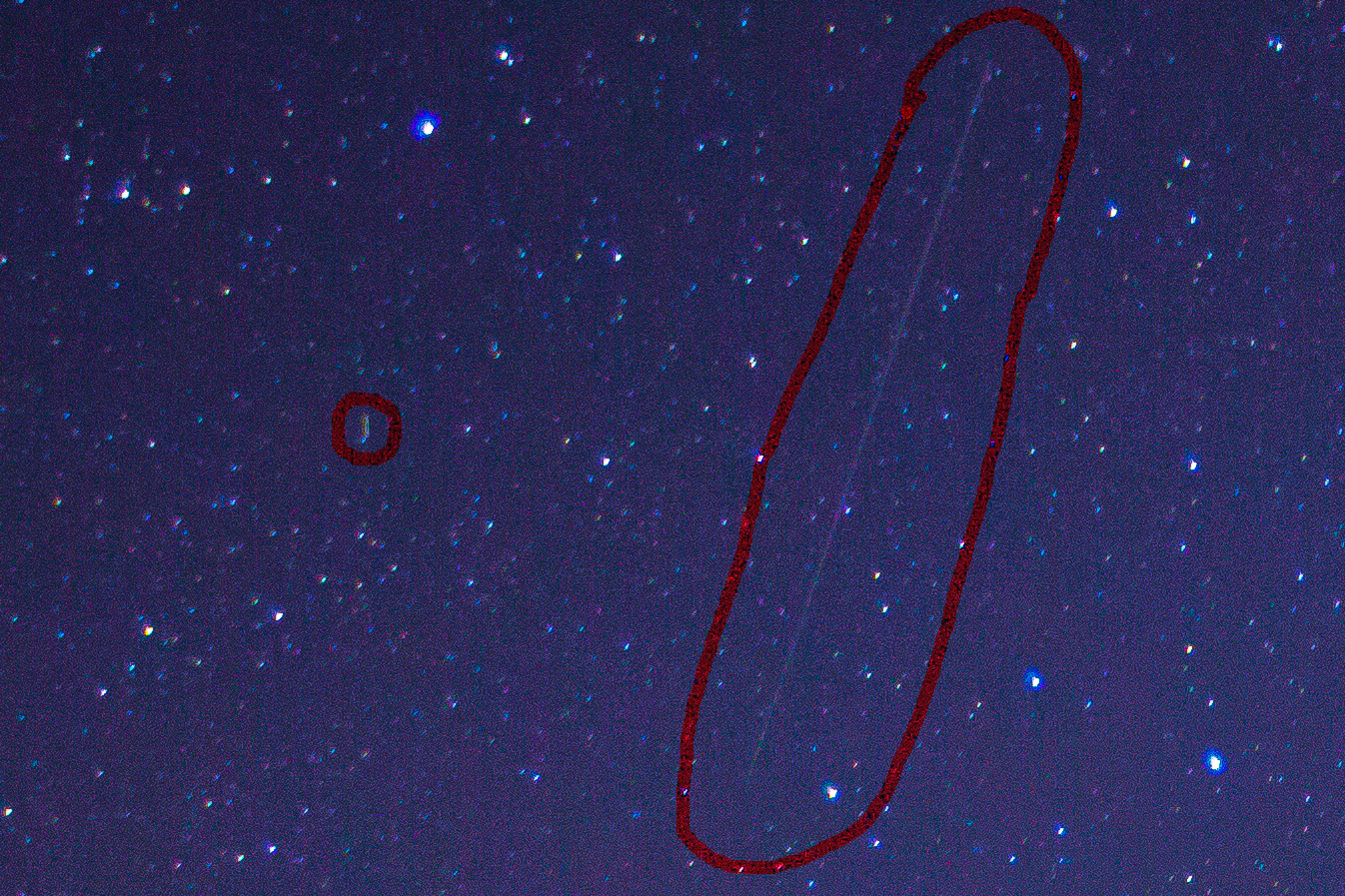 There was a Spacex Falcon 9 launch from Canaveral Air Force Base in Florida approximately five hours before your photos were taken. It launched 60 broadband beaming satellites into orbit for the Starlink project.

The current orbits of each of those 60 satellites when backtracked to the time of your photos, is nearly identical to the track you recorded. They have since been spread out in a line so that each one passes the same position over a period of several minutes. I'd be fairly confident to say that what you recorded had something to do with the deployment of those satellites. The earth's shadow at that altitude (approximately 550 km) and time was only slightly further to the right in your photo. Other Starlink satellites from previous launches at that same altitude but in slightly different orbits that placed them a bit further to the right in the photo were still in the Earth's shadow until they passed below the bottom of your photos' lower edge. (For example, Starlink-1060)

It could be a satellite in a fairly high orbit.

Check out Heavens Above and see what was in the sky above you at that time. Don't forget to enter your location or all your results will be for a spot in the Atlantic ocean at (0° lat, 0° long).

If you find a satellite listed that was overhead at the time you recorded it, you can click on the time it was highest above the horizon and see a chart showing its track relative to the stars as seen from your location. You can compare that path to the path in your images. Keep in mind that if the satellite's orbit is altered after you saw it but before you look it up, you won't get an accurate position at Heavens Above, so the sooner you look it up, the more accurate your search will be.

It is possible that what you recorded is at a higher altitude than most of the brighter satellites listed at Heavens Above. If so, then it would mean that the brightness of a satellite at such a height could only be explained by something other than general reflectance. Perhaps a large rocket motor boosting something to a higher orbit? Or a particular highly reflective surface oriented perfectly to reflect sunlight over a small area on the ground?

It could have been an airplane flying very high. Probably a little higher than the highest altitudes typical long distance commercial airliners fly at around 40,000 feet/12,000 meters. The lack of any blinking navigational lights argues against this being a plane, as does the fact that it disappears well before it gets close enough to the horizon for atmospheric haze to dim the light until it can no longer be seen. Lastly, international flights do not tend to fly West to East that far south over the Atlantic Ocean. Even New York to Paris flights pass well to the north of the UK. South American flights to Europe tend to past much further to the south and are moving more NE than what you recorded. Any flights originating in the UK would not have already been that high when they passed over your location in East Sussex.

I've caught lots of satellites passing through my other images and it takes roughly 2 mins to completely go in and out of frame... So 21 mins is a fair difference for a higher satellite?

The higher a satellite's orbit, the slower it moves relative to the the Earth's surface.

Geostationary satellites are in orbit 22,236 miles (35,786 km) above the earth and complete one orbit of the earth in the same amount of time it takes the earth to make one rotation. If it is in an equatorial orbit, it stays above the same spot on the Earth's surface all the time (give or take a few fractions of a degree or arc due to orbital perturbations caused by solar wind, gravity waves, the gravitational influence of the Moon, Sun, and to a much lesser degree, other solar system planets, etc.). If it is in a declined orbit, it appears to move up and down in the sky over the same spot with one complete cycle every 24 hours.

Any satellite in an orbit higher than geostationary will appear, from the Earth's surface, to be going backwards relative to the direction of its orbit.

The Moon is in orbit above the Earth at an average height of almost 250,000 miles (400,000 km) and takes almost 28 days to complete one orbit. Its ground track actually moves backwards over the Earth relative to the direction of its orbit because the Earth is spinning 28X faster than the Moon's orbital period. Relative to the ground, the moon moves its own angular width (roughly 1/2°) every thirty seconds. It takes all night (or all day, or a combination of both, depending on its phase) for the Moon to move across the sky as seen from the ground. Relative to the ground, the stars are moving ever so slightly faster. In each 24 hour period, the Moon moves roughly 13 degrees less than the stars, or about its own width each hour relative to the stars.

If this was a plane doesn't that mean that it was higher up than the satellites if its passing slower?

It never continued all the way through, just slowly got darker.

Differences in brightness of satellites as they pass overhead can be easily explained if they are rotating or tumbling, or if their solar arrays - which are often their most reflective parts - are moving to stay aligned with the Sun rather than the Earth. They can also disappear while above the horizon when they pass into the Earth's shadow (or appear out of the Earth's shadow while already over the horizon), though this tends to happen mostly with lower flying orbits and at times closer to sunset or sunrise.

I'm fairly new into the astrophotography scene. I know there are a lot of people on here with more experience than me. So is there any chance of it being (a) near earth asteroid?

It's not very likely at all it is a near Earth asteroid. An asteroid would generally take days or even months to move that far relative to the stars in the celestial sphere, not minutes. An asteroid would also be much dimmer than what you recorded and probably not detectable at all with the setup you used. If there were an asteroid that much closer than geostationary orbit large enough to reflect sunlight and be detectable from the Earth's surface with your camera and lens in the amount of light pollution you're seeing from your shooting position, it would be ALL over the news that the sky is falling!

Took out the spreadsheet. 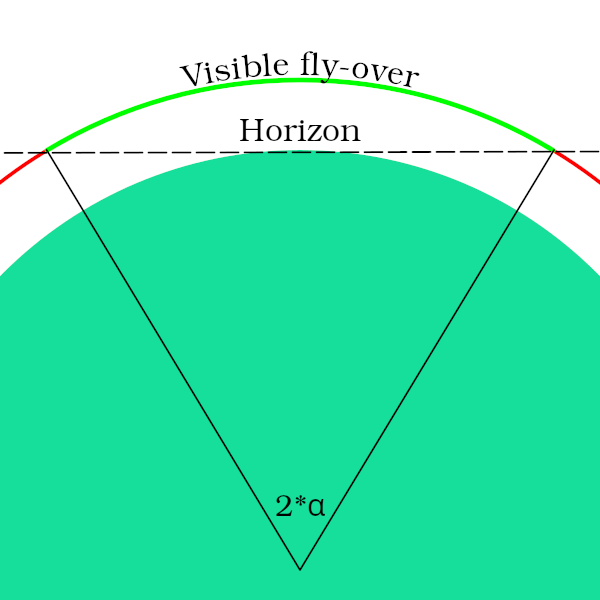 The angle 2α increases with the altitude of the satellite. (cos(α)==R/R+h). This 2α is the part of the satellite's orbit that you can see, so knowing the period of the satellite (also a function of altitude) the durection of the visible fly-over can be evaluated.

The fly-over time of a satellite going from horizon to horizon and above your head is around 6mn for a 200km orbit. and at 1500km the fly-over is 23mn. So, if this is a satellite:

On the other hand, an airliner in flight is also an object that moves at constant speed at a constant altitude, so the same computation can be done, and a plane flying at 12000m and 900km/h (typical values for airliners) takes 50mn to fly over you from horizon to horizon, so this 23mn streak is roughly compatible with a plane. Any hints of blink lights or it just a single pixel?

24
Longer exposure & lower ISO or shorter exposure & higher ISO - what gives better results when photographing stars?
1
Am I experiencing field distortion while astro photographing when stars on the edges give trails?
4
How long does the exposure have to be for a specific astrophotography object with a given lense, iso and aperture?
1
Why does photographing the Milky Way require short exposure, when star trails need long exposure?
0
How long does it take for a celestial object to move across the field of view of a 32 mm SuperView eyepiece?
1
If I wanted to compare image's RGB pixelation values of the same object taken with differing cameras, what discrepancies might I run into to?
0
How to set exposure for photographing the milky way?
3
What interval between photos is recommended for shooting meteors?
2
How do I keep it from moving out of the frame so fast when taking a video of Jupiter?