Is cyan brighter than red?

I'm not sure if this is on topic, but here goes.

So which (if any) is right? The second one makes sense to me, I wouldn't expect cyan to be any brighter than red, but I can't figure out why the first doesn't make sense. Am I describing color completely incorrectly?

As suggested, I'll edit to include how this affects my workflow. Short answer, it doesn't. But I think understanding color in general is very important to an art which is literally just capturing color on an xy grid. If I had a question about how the aperture actually opens or closes on a lens, I'd ask that on a photography network, not an engineering network.

HSL/HSB/HSV are also not good for direct comparison as the saturation and brightness values are also relative to the hue and not to each other.

I.e. any value of 255 or 100% means the color is as bright as it can be, but it does not mean the color is lighter/brighter than another color. 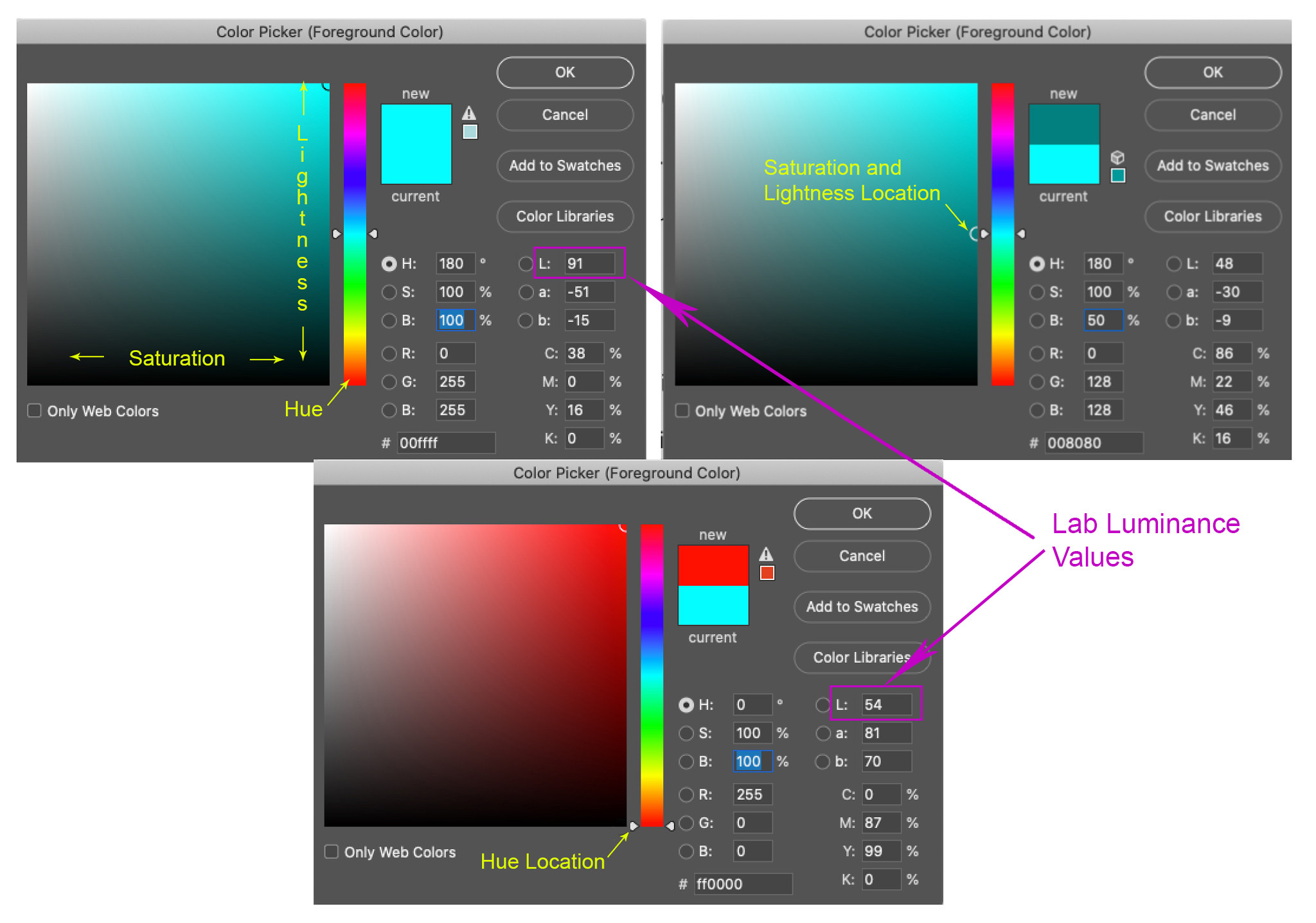 You will only get the maximum brightness from the monitor when all RGB pixels/sub pixels are at max value; i.e. displaying a white screen. When displaying a cyan screen it is less bright, but brighter than a red or black screen.

The difference between HSL and HSV is that in HSL, only white can have L=1. Saturated colors are always L<1.0. In other words every triplet in HSV can be mapped to RGB, while many HSL values have no matching RGB (out of gamut colors).

On the other hand the perceived luminosity is a different beast, because our eyes are much more sensitive to green so the real luminosity is closer to the "Luma" used in the YCbCr or LCh color models. Not everybody agrees on the actual coefficients, but they all give more importance to green, and much less importance to blue, for instance HDTV standards use:

2
What change does tone curve make in pixels in a colored image in Photoshop and Lightroom?

11
Why are the red light and its hood in my image colored different than they were in reality?
4
Why am I getting a cyan cast on Epson Claria printer only in the highest-res print mode?
7
Why does BRIGHT red in direct sun come out orange?
4
Skin very red, blotchy in front of camera
3
Why does my white picture have a blue hue? And brighter/darker horizontal waves?
6
What determines whether chromatic aberration will be purple/green or red/cyan?
56
Why are Red, Green, and Blue the primary colors of light?
2
adobe lightroom import photo more red than original
3
Why does Lightroom not have a cyan-red slider for color correction?