Is there an effect opposite of tilt-shifting?

Something else? Maybe based on an entirely different principle having nothing to do with fiddling with focus, don't know what

The miniaturization effect that can be created with a tilt shift is due to manipulating the perspective (angle/distance/field of view) and spatial relationships; while simultaneously creating a shallow depth of field which is entirely contradictory.

When a lens, or your eye, is focused very close there is very little that can be in focus simultaneously. This is the primary visual cue that causes the miniaturization effect when combined with a field of view that clearly indicates a greater distance (i.e. shallow DOF from long distance).

What you need to do for the opposite effect is to create a greater depth of field from what appears to be a shorter distance. This is most easily done with wide angle lenses and manipulating spatial relationships. The goal being to make the near and distant objects appear to be at the same focal distance/image plane. The common term for this technique is "forced perspective," as in this image. 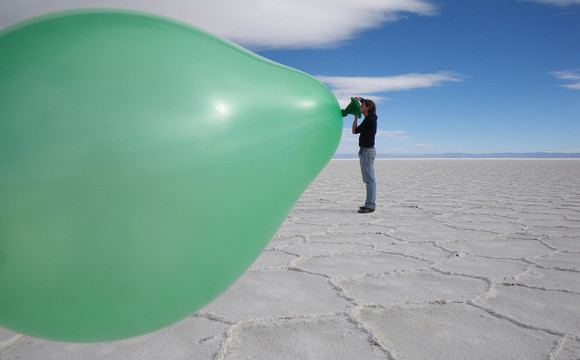 What you're after is the original usage of tilt and shift -- as a technique, it's called scheimpflug and is handled by adjust the tilts and swings to control the focal plane so that the planes of intended focus, of the front standard (standing in for the iris plane of the lens) and the film all meet at a single line somewhere in space (for landscapes, where this originates, that line will be below the camera, often below even the ground the tripod stands on).

When tilts and swings are managed this way, it's possible to have objects close to the foot of the tripod, objects on the horizon, and everything on a plane extending from one to the other in focus. Shifts, rise, and fall are then used to control the actual view that's cropped by the film edge to form the final image.

Note that this technique, fully applied, requires the movements and lens coverage circle of a true view camera; tilt-shift lenses on medium format or 35 mm cameras can only do part of this job. Sometimes you can get by with partial movements of a press camera -- and sometimes you can't, depending on where you need the plane of in-focus distances to fall.

For movie shots where a small(ish) model stands in for a very large object (temple, aircraft carrier, spaceship), on the other hand, they have to use real depth of field to make it appear they're shooting from a distance -- but they have to shoot close to make the object appear large. One way this is done is with special very short focal length lenses (for great depth of field) on periscopic extensions and moved through or around the model. This, combined with motion control and compositing, allows creating shots that, for instance, can show R2-D2 in his mount in Luke's X-Wing as Luke approaches the Death Star, and give the station scale through forced perspective and apparent movement. This kind of thing can't readily be done in camera, because cameras we can haul around (and afford) can't mount the lenses that help make this work.

Not the answer you're looking for? Browse other questions tagged focus effect tilt-shift or ask your own question.

1
How do I achieve this minature/tilt-shift effect?
6
Is there a correspondence between Tilt-Angle and the angle of the Focus-Plane?
9
How to Maximize the Miniaturization Effect With a Tilt-Shift Lens?
4
Why does this shot appear to have the miniature “tilt-shift” effect?
7
Can the lensbaby achieve a similar effect to a ± 8.5° tilt?
4
Can Focus Stacking produce the same effect as Tilt-Shift?
0
Is there a tilt shift lens for the iPhone?
2
Framing when adjusting tilt on a tilt-shift lens