What is a zone plate?

I was looking into alternative methods of photography and I happened upon something called a 'zone plate.'

A zone plate is a way of focusing light, like a lens, but using Fresnel diffraction instead of refraction. This is cool from a theoretical point of view, because it demonstrates the wave nature of light. And it's cool from a photography point of view, because the images produced have a unique glow, with an impressionistic almost-painted look. If you're attracted to a certain lo-fi "old-camera" aesthetic, using a zone plate is a way to get it authentically, rather than faking it in post-processing.

The plate, which is a small piece of glass, plastic, or something else relatively transparent, is inscribed with concentric opaque circles. In order to create a focused image, these are placed so that the interference creates zones of "constructive" interference, forming a focused image. The D.I.Y zone plate web page Whiz Kid Technomagic Zone Plate Designer explains the math and pratical physics behind the choice of size and spacing quite nicely. And the Wikipedia article on zone plates has some graphics, one of which I'm borrowing here: 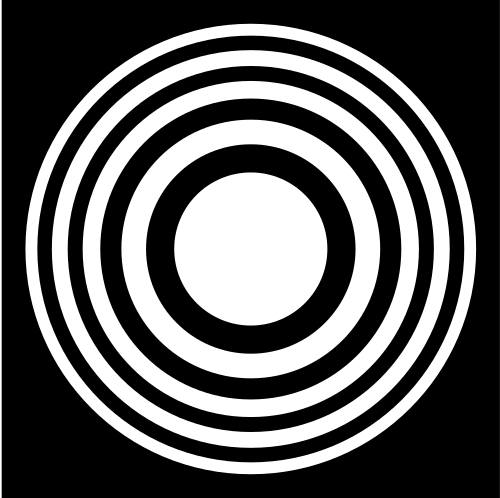 (This same sort of image is also used, for unrelated reasons, and with finer circles than the one above, to produce moiré patterns for testing display quality, or for tuning autofocus.)

A zone plate is often compared to a pinhole lens, but there are important differences.

First, it does have a depth of field and therefore can be focused, although usually the DoF is rather large (like using a 35mm lens stopped down to f/22 or so). Second, the amount of light let through is significantly greater. For example, Lensbaby's (out of production, as of 2015) Pinhole/Zone Plate optic provides an f/177-equivalent pinhole, and in zone plate mode is something like f/19 — 6½ stops faster.

This means that with a modern SLR, you can, with care, shoot hand-held. And, although it'll be dark, you can even compose through the viewfinder. (On my Pentax K-7, the metering even works accurately.)

Perhaps most importantly, the zone plate look is quite distinctive. Point sources of light will actually show the concentric-circle pattern of the zone plate in a very dramatic way. And as with bokeh in a lens, this affects the image even in non-highlight areas — areas of bright light have a, well, diffused glow around them. Personally, I don't care for the "archery target" effect of highlights and try to avoid them, but I like the soft look which suffuses the image if point sources are avoided: 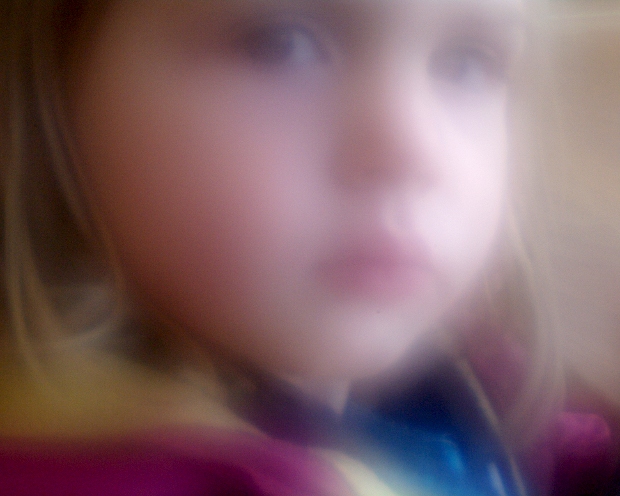 There's examples on Flickr, and since Lensbaby sold a zone plate optic, they also provided a gallery of samples which illustrated the effect. That's offline now, but a few images are still in on the site, including one which shows the concentric-circle light effect, and a nice portraits. I also think it works very well on flowers (but Lensbaby's sample for that has vanished).

On the Lensbaby product: I'm not sure I'd spend $100 (or more) for a lens body plus $40 for the pinhole/zone plate optic just for this, but if you already have a Lensbaby, or are thinking of getting one for the other optics, and are interested in this kind of photography, I think it's well worthwhile. (Unfortunately, it's no longer made, but you may be able to find it used.) Since moving the focus plane and area of sharpness isn't really a consideration here, the Scout lens body might be the best choice.

Pinhole Resource also offers zone plate body caps; at around $65 for the dSLR versions, these are considerably cheaper than the Lensbaby combo (but of course more expensive if you're considering a whole Lensbaby kit anyway). I haven't used these, so I can't meaningfully compare them in practice. I notice that they're f/45 — two and a half stops slower than the Lensbaby. That would probably compromise the ability to compose through the viewfinder, and I wouldn't be surprised if metering is out of the question. And of course it means any portrait subjects need to sit extra-still, perhaps pretending they're getting their 19th-century tintype taken.

And, there's the D.I.Y. zone plate page I mentioned above. This suggests an older process using B&W film to make precise lines, or else simply printing on a transparency with a laser printer. This is probably less precise than the machine-made more-expensive zone plates, which would result in a loss of overall resolving power — but if you're going this approach, resolving power probably isn't your top concern anyway, and as the site notes, you'll have the flexibility to tune your zone plates to different wavelengths of light or to different focal lengths and aperture sizes.

They're an alternative to lenses. Basically using diffraction instead of refraction to focus light. They're very common in some forms of lithography when dealing with wavelengths that glass blocks. You can actually think of a single pinhole as a degenerate case of a zone plate.

zone plat is a special screen to block off light from every half period zone. in zone plat amplitude A=A1-A2+A3-A4+A5-A6.+..+(-1)m-1Am . THE EFFECT IS the removal of either all negative or positive term in amplitude.

122
What is bokeh, exactly?
56
What methods can be used to micro-adjust autofocus of a camera body to a particular lens?
11
How can I approximate 'soft focus' digitally?
9
What's the difference between the Lensbaby Composer and the Composer Pro?
4
Is it possible to add haze to a portrait shot?
7
How can I shoot wide angle zone plate photography?
6
K800i 5.2 mm lens equivalent

14
Is there an easy way to force chromatic aberration?
7
How can I shoot wide angle zone plate photography?
5
What can go wrong with extreme long term exposure?
4
How do I calculate equivalent focal length from field of view?
6
Can extension tubes be used to zoom in in pinhole / zone plate photography?
3
How to determine if a new lens is a subpar copy?
2
What is the difference between these 200mm, 70-200mm and 70-300mm lenses?
4
What is the effect of lens haze on images?
3
What is the light called that is outside the area of the capture medium?
5
Should I avoid used lenses involved in video shooting?