I have this situation while shooting still life photos of e-commerce products, lets say for example leather shoes or leather bags:

Given these fixed settings, all the pictures should show the same exposure no matter the object that is in the picture.

Instead I get different exposure depending on the object that I am shooting:

I am facing this problem since a long time and I fix it in post production with Camera Raw. I have made research and tests on the camera with different settings to understand why it acts like that, but I can't figure it out

It looks like there is some sort of auto-exposure going on that I can't control or that I can't find on the camera settings.

Unfortunately I can't attach any example since I cannot publish the products photos.

I would like to know if is possible to have same exact exposure results giving fixed camera settings, without the camera making any auto-exposure (or similar).

EDIT : I cropped the same area on two different images, with same settings in all, but as you can see, the white background, who should be same grey, is darker in one and lighter in one. It is not a shadow since the more or less brightness affects also in the object itself. The image looks overall brigter or darker. The black areas are the objects that I had to erase because I can't show or publish them.

EDIT2 : Investigating in Adobe Bridge I found a very weird thing, even if in the metadata the settings are f8,0 1/160 ISO 100 35mm for both images, in the Exif data it says: 24mm max value f/3.8 for the first image, 135mm max value f/5.7 for the second image. That's pretty strange... Is it possible that would be a hardware error of the lens sensors? 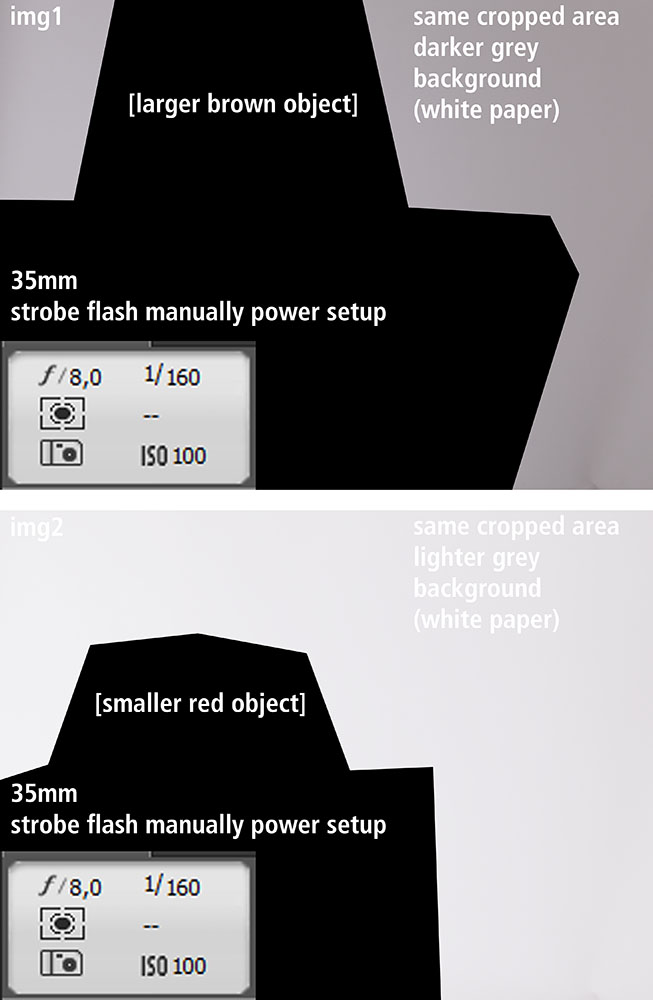 If you're holding all exposure parameters constant, then the next suspect for me would be your white-balance setting, which I don't see mentioned above; e.g., do you have auto-white-balance (AWB) enabled, or set to a fixed temp?

Remember that most cameras are designed to interpret any scene you throw at them as 18% gray and compensate for that.

If that's not it, and if having a similar/constant exposure between shoots is a big time-saver for your work — have you considered picking up a gray card or similar? That would help take the guesswork out of adjusting in post-processing, at least.

How repeatable is it? A few ideas:

I've managed to significantly change light levels by standing between the light source and the subject :-)

Do you have to move the lights to get the larger subjects in?

You mentioned a difference in EXIF, that's apparently recording current focal length and current max aperture for different zoom positions. It's not impossible that a variable aperture zoom isn't really at f8 when you set f8 -- that the non-wide-open apertures vary too. I'd assume they'd design in a compensation factor--just a lookup table--but eh, maybe they didn't. Wouldn't cause problems in TTL metering situations.

Is anything firing a TTL pre-flash? I had a strobe that wasn't properly turning off the built-in slave cell when I had a radio cable plugged in. For my usual no-Speedlite, radios-everywhere setup it worked fine--it was working differently than I'd intended, but it still worked fine. But I try to introduce a little on-camera fill and suddenly that strobe wasn't contributing to the exposure. Took me a while to figure out I'd left the on-camera flash in TTL and the pre-flash was firing the defective strobe early.

You mentioned there's an exif data incoherence with the parameters you shot. Although this could be an error of internal parts of the lens (dirt or moisture in the metal tracks of the barrel, whatever...) It won't affect exposure and colours or white balance. I've tried right now inhibiting the connectors and shooting manual.

What I don't know very well is the studio light settings, height position of the strobes, distance to object, distance to background etc... This may in fact interact with the exposure of the object to photograph. Given a way bigger object it may throw shadows to the white background, absorb/reflect light to/from the background/light or even trigger dynamic range corrector some cameras have. You should try a different light settings with height and distance that affect the less given two different object sizes if it happens to interact. Of course, as other mates have stated, turn off AWB and stablish a parameter by yourself. Let us know if you find the causes of this issue.

I had chance to finally verify that the problem was 100% caused by the lens. It was internally unstable and in certain position the internal connections were not communicating the right values to the camera body (or they were completely isolated).

This problem seems at first random happening, then after more shootings it got worse and in the end the lens got stuck and would not zoom anymore. If you shake the lens, you can hear some little thing (maybe a little screw) going around.

Not the answer you're looking for? Browse other questions tagged lighting camera-settings exposure-correction or ask your own question.

28
If shooting RAW, is the white balance selected in camera irrelevant for exposure?

3
What is the difference between an exposure slider and a levels slider?
5
Why are my Nikon D5100 M Mode (Manual) settings reset for every shot whilst the camera pointing to the same object?
3
What is the difference between a very expensive flash and a average priced flash?
0
How can I maximizing dynamic range without postprocessing?
2
How to optimize detection of brightness changes in an immovable object?
2
How to programatically adjust exposure based on image metadata?
1
Which camera (and lens) mode or settings for moving subjects?
3
Random EXIF data with same camera settings
4
Light source giving wrong color
1
Which actions in the camera menu/settings change the focus and which do not?