Why are my sunsets not turning out well?

I am interested to know why are some of my pictures turning out this way. For example if you take a look at the sunset I took below, clarity and generally image quality is fine around the sun and clouds, but hills are all kind of greyed out and blurry, which was important part of my shot. 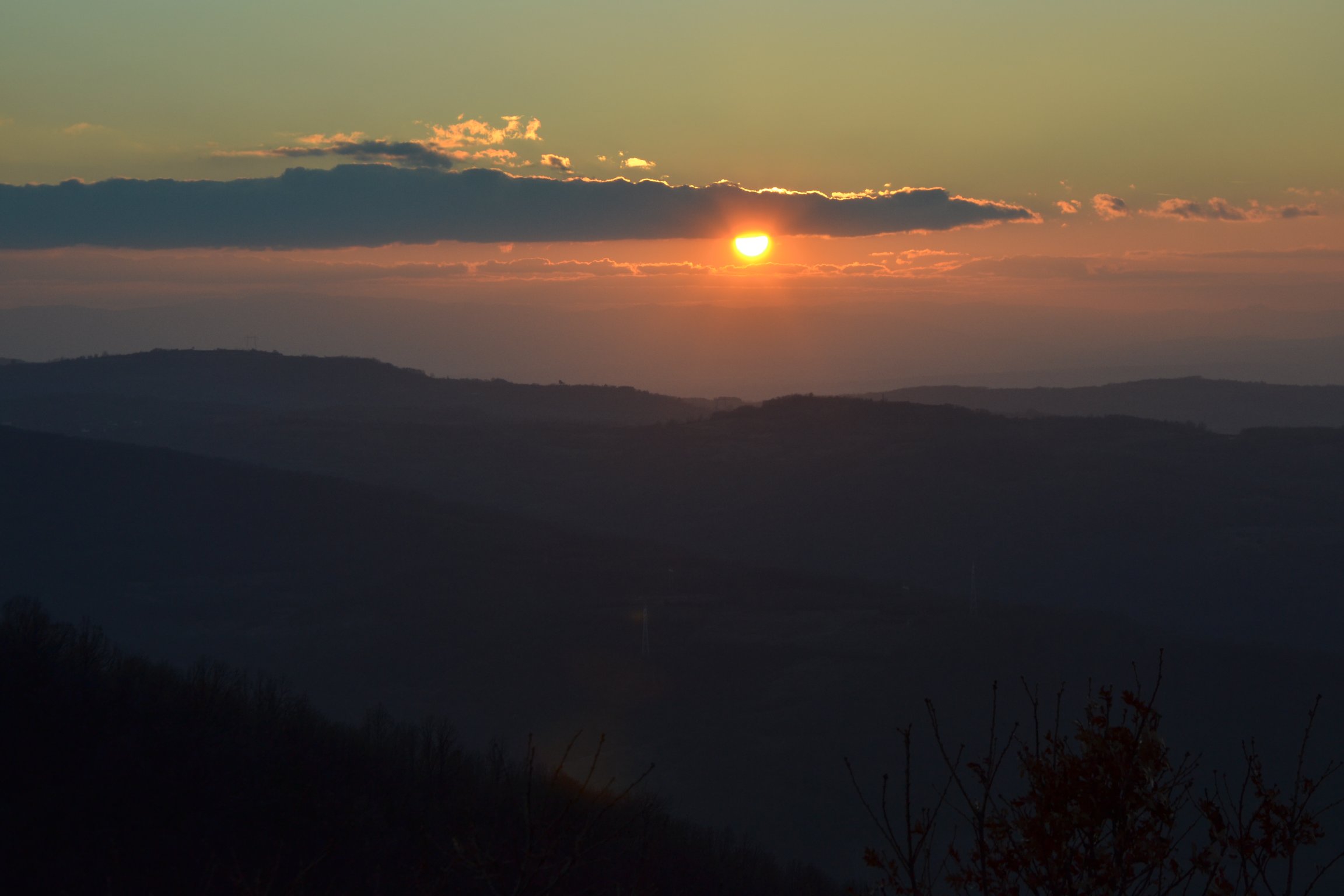 Why for example on the other photo below, you also have a strong sun, but the bottom part is sharp and looks good? Not minding the post processing, which I don't think is the main issue here. 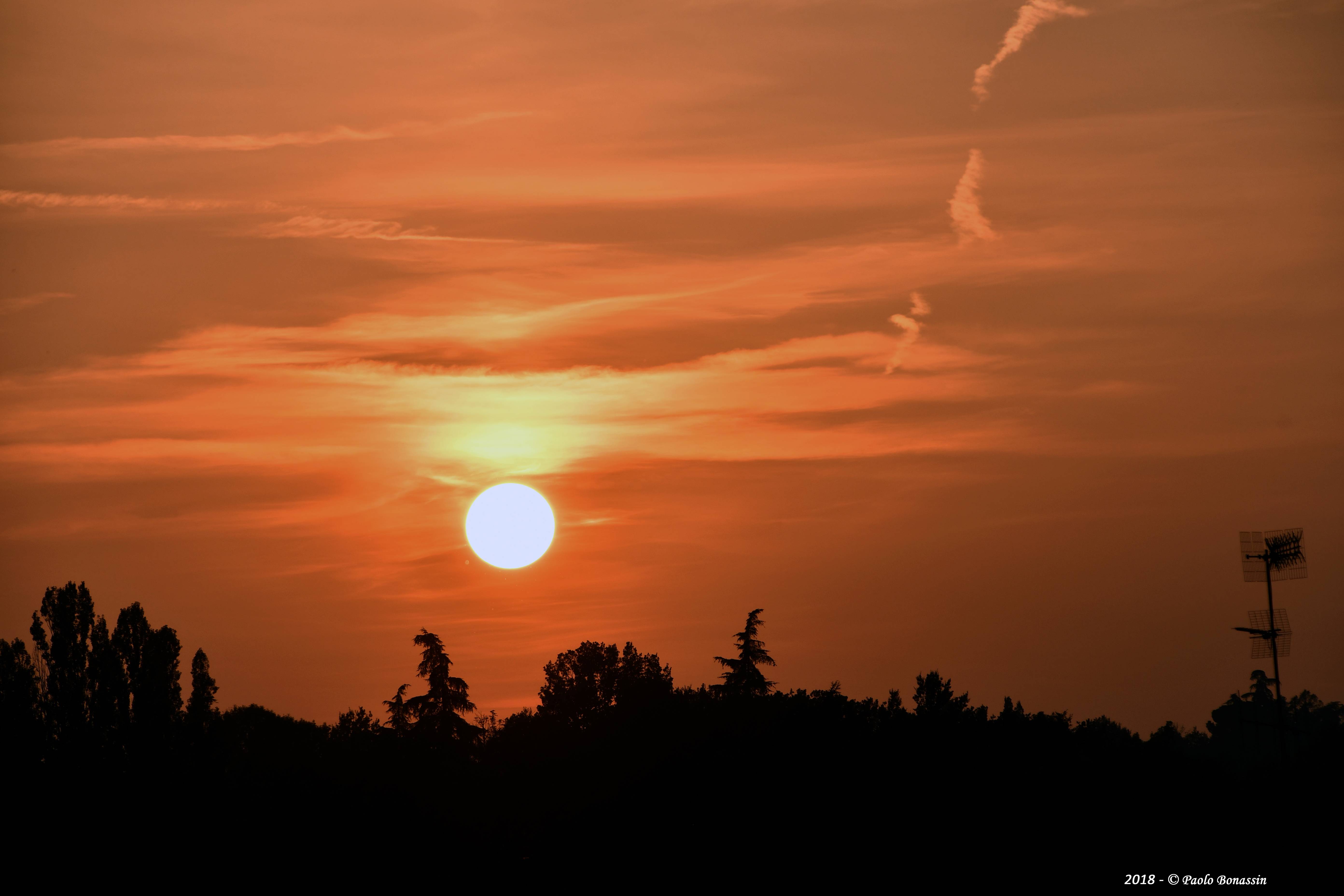 I have a nikon D3100 which is an entry DSLR so I am not sure if it's because of the camera or something else. Is this dynamic range problem?

There is no problem with this photograph, there is a 'problem' with the scene. There is a lot of dust in the air.

There are 3 ways to mitigate the 'problem':
1) Improve the scene; come back after it has rained.
2) Appreciate the beauty of it, this is also what it looked like in real life.
3) Use the 'dehaze' feature in post to reduce the problem.

If you don't have Photoshop, you can use the free program Darktable for haze removal. It is a very advanced program, but it is a bit more difficult to use than Photoshop.

As others have pointed out, a large part of the difference between the two is the air quality at the time the image was captured. One was taken in what appears to be fairly clear, dry air. The other was taken through air that was very hazy due to either dust, moisture, or both.

Beyond that, there are a few other noticeable differences:

I'm sure haze is a problem here, but the landscape is also very dark. If you used a longer exposure so that the landscape is less dark, you should also see more details. If you do that, probably the sun and sky would be overexposed so you don't get the same sunset feel. To get around this you could take two pictures with different exposures and merge them.

For example here I cropped it so that the dark landscape is roughly the same height as the sky above the clouds, with the sun horizontally centered. And I played with the filters in my very basic mobile image editor a bit to darken the landscape more (it also affected the clouds so I had to compromise because I didn't want to darken those).

Beside all the other answers, I suspect that the coloration in the second foto is not "natural" in the sense that at least the white balance was set to something else than white daylight, and possibly also the red channel up slightly in post.

It is not impossible to see a sunset of this color in reality, but it is rare to have this red intensity across the whole sky. I suspect that if you want this color naturally, you have to go somewhere closer to the equator than where most of us live. Also, if you are using some kind of automatic white balance, it won't do well on sunset scenes - see how above the clouds, your sky looks greenish. I have never perceived such an effect when observing a sunset with my eyes - when I'm outside, it seems that the parts of the sky which aren't colored red are still a standard sky blue. This mixture of red-orange with blue that produces a greenish shade either doesn't exist, or gets filtered by my perception.

So play with the colors, and see if you won't enjoy it more.

I'm not sure if you are also asking about that part, but I would argue that the second picture also has a better composition. The larger sun is more visually impressive. It is not overshadowed by a massive cloud like in the first picture. And the sky in the second picture, while reddish everywhere, has a subtle texture of layered clouds - the first picture has a narrow horizontal band of texture at roughly sun height, but is quite flat above and below it. The underexposed mountains that got mentioned in another post also don't have visual variety. So there is much less to keep your attention. That's not to say that you can never have a photograph that is full of flat space, but these only work when done on purpose, and need some planning to pull off.

Not the answer you're looking for? Browse other questions tagged nikon image-quality landscape dynamic-range or ask your own question.

15
How to postprocess photos with lots of blue haze?
5
A Good "Flexible" Default Setting For Shooting Highly Dynamic Subjects
29
Why don't cameras capture dynamic range as our eyes do?
3
Sony A6000 blurry in peripherals despite sharp center -- is this a mirrorless thing?
18
Why is this smartphone picture better than this dedicated camera picture?
2
How to get sharper photos with a kit lens when in low light conditions?
9
Why is the earth not overexposed in this star photo from the ISS?
3
Why are my D5300 photographs blown out?
2
What is the best shutter speed for fast-moving clouds?