One thing and one thing only determines perspective: Subject distance. Period.

For more please see:
Is there a difference between taking a far shot on a 50mm lens and a close shot on a 35mm lens?
Does wide angle equivalent in crop sensor skew image?
Can a telephoto lens have a wide field of view?
How does focal length change perspective?
Why is the background bigger and blurrier in one of these images?
What does it really mean that telephoto lenses "flatten" scenes?

I think your basic confusion expressed in the question is due to the different ways the different sources you're looking at use the word perspective. They're not all meaning the same thing when they use the same word.

The difference is covered in more detail at this question here at Photography SE:
What is the difference between perspective distortion and barrel or pincushion distortion?

Perspective describes the distance relationships between the camera and various items in the lens' field of view. As long as the camera is in the same spot and everything in front of the camera is in the same spot, then the perspective will be the same regardless of the focal length lens that is used. The focal length will determine the angle of view (as long as the film or sensor size does not change), but it won't affect the perspective at all. If you take a shot with very wide angle lens and cropped the middle of the resulting image, it would look the same as a shot taken from the very same spot with a longer focal length lens giving the narrower field of view of your crop. You'd lose resolution due to throwing away most of the camera's pixels, but the perspective would be the same.

From the description for the [Perspective] tag here at Photography SE:

Perspective is the spatial relationship between a camera and the things the camera is photographing. If two objects of the same size are in the scene and one is much closer to the camera than the other the closer object will appear to be much larger than the further object. If the two objects remain the same distance from each other but the camera distance is increased from both then the apparent size difference of the two objects will decrease.

On the other hand, even two lenses with the same focal length can have different geometric projections. This will affect the shapes of items in the image, but it won't change what the camera can and can't see from the same shooting position. If Box "A" is in front of box "B" and hiding half of box "B" from the camera, changing from a rectilinear lens to a fisheye lens will not change how much of box "B" can be seen by the camera. That's what perspective is. The different geometric projection may cause straight lines to look curved, or items at the edge of the field of view to be "stretched", but it doesn't change perspective.

In the real world, there is no such thing as a lens with a focal length of infinity. That's a figment of the imagination that can be employed in CGI. To get orthographic projection with an actual camera, one needs a telecentric lens.

To get a view where objects on the far end of a three dimensional subject appear the same size as objects on the near side of the subject, we must use a telecentric type lens that will give us an orthographic view of our subject. One of the basic requirements of a telecentric lens is that the lens must be at least as large in diameter as the subject. That tends to make them very expensive.

Just to provide visuals to the answer that only distance controls perspective. It's not "perspective distortion" nor "focal length compression" as commonly described... it is simply perspective (point of view).

Here are three images taken with three different FL lenses (82mm, 50mm, 28mm) from the same distance (copied from a lesson I created). 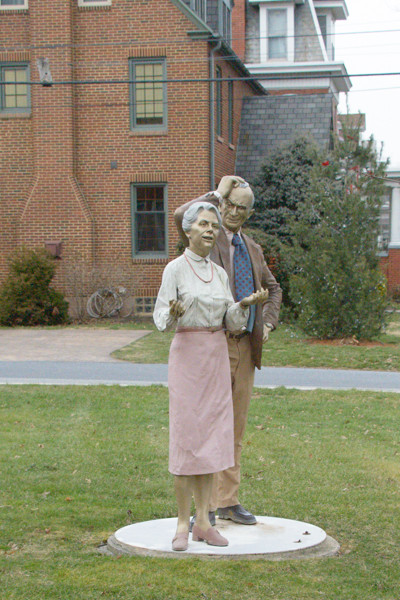 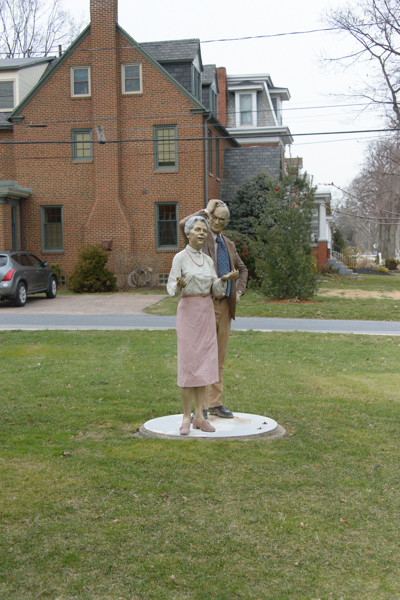 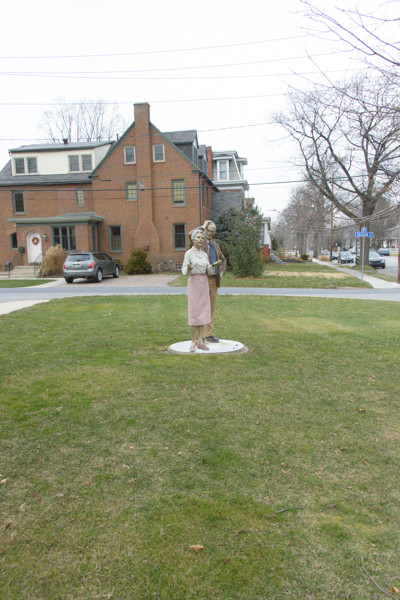 And this is the wider images cropped to the same final image... the perspective is the same in all of them. 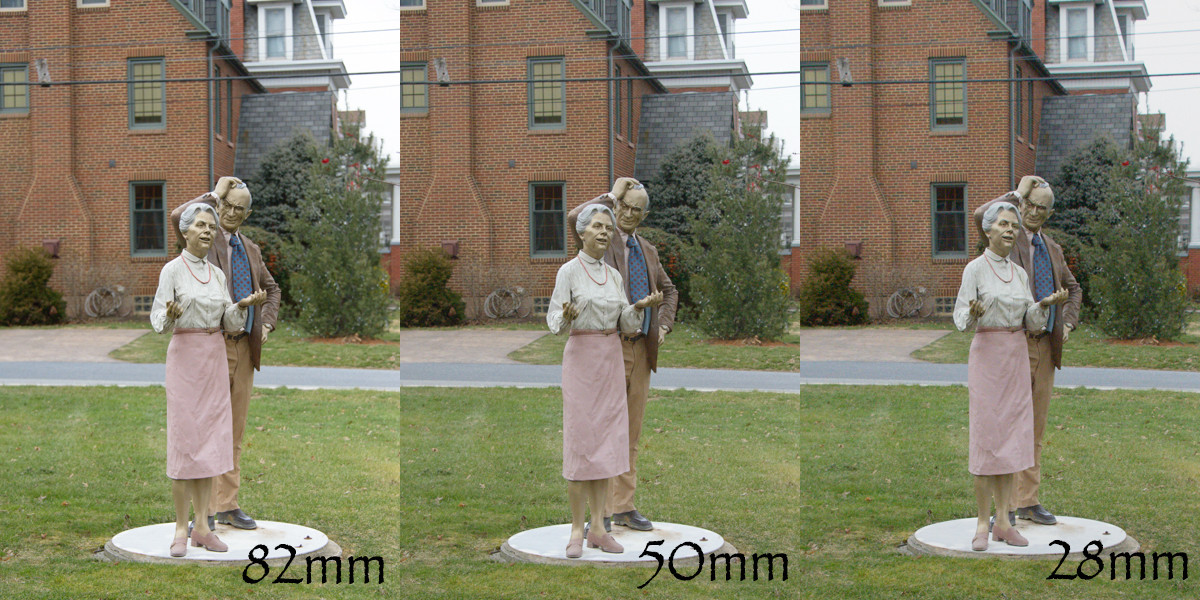 These images are taken from different distances but keep the subject approximately the same size (different FL lenses were used, but they could be crops as well). 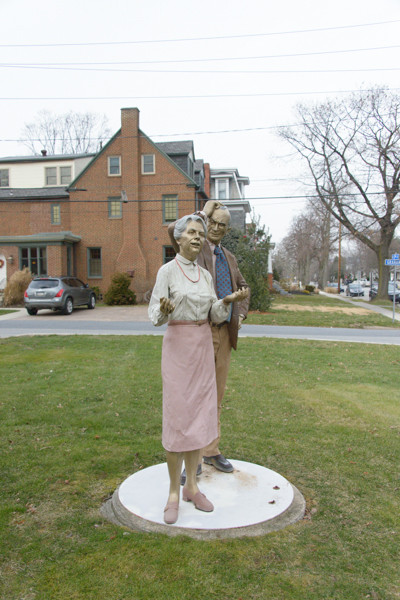 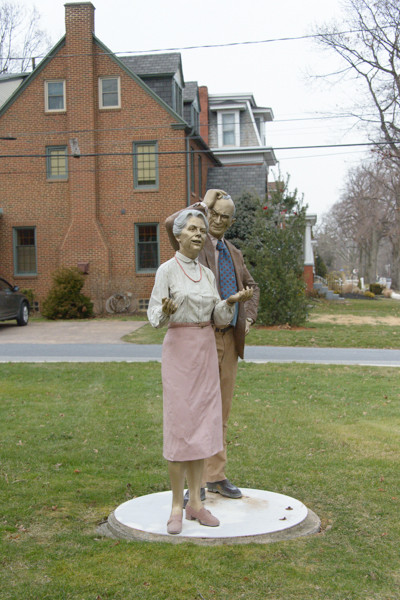 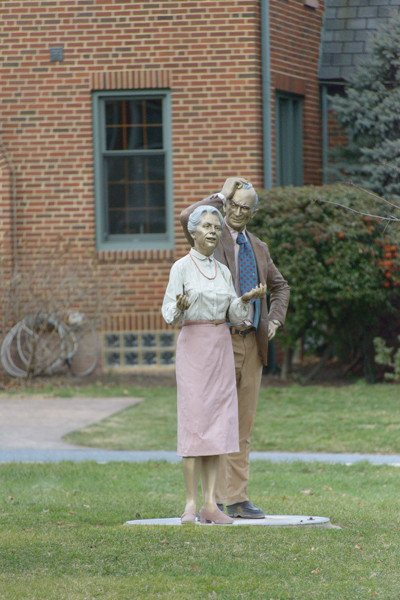 It is the change in relative distances that causes the change in perspective. I.e. if you are very close to the subject then the background is relatively much father away from you. But if you move far enough away, the subject and background are much closer to each other than they are to you; enough so that they seem to be nearly on the same plane.

Most images do well even if their perspective is incorrect, some images fare poorly. To view a photograph with the correct perspective:

View the camera’s image made the same size as the film / imaging chip, from a distance equal to the focal length setting. Such a viewpoint is likely not possible because modern cameras are petite thus the focal length used will be very short. Keep in mind that the closest the average person can read or view is 250mm (10 inches).

Because the modern camera makes tiny images we view them enlarged on our computer screen, TV, or as a print on paper. For these viewing methods we need to take into account the magnification applied to the final image.

Suppose an FX (full frame) 35mm size camera images the human face (portrait) taken with a 100mm lens. We enlarge this image and make an 8x10 inch print. The magnification applied will be about 8x.

In short, an image will appear correct as to perspective if viewed from a distance about equal to the focal length multiplied by magnification used to make the displayed print.

Post Script: The only effect of focal length on perspective is to change the size of the image and the distance from which the displayed image is to be viewed.

The human perspective is simply what we see with our eye/brain combination. Standing before a glass window, you can draw, with wax pencil, the outline of objects you are observing. The perspective you observe is thus duplicated by the drawing. We are talking about the spatial relationships of the objects.

If a camera is used to image this vista, it is placed at about the same distance from the glass as your eye. The image it makes corresponds to the image drawn on the glass provided this image is viewed at zero magnification from a distance equal to the focal length of the taking lens.

If the viewed image is an enlargement, the viewing distance, to see this vista in correct perspective becomes the focal length multiplied by the degree of enlargement.

Not the answer you're looking for? Browse other questions tagged focal-length camera perspective or ask your own question.

42
What does it really mean that telephoto lenses “flatten” scenes?
29
Is there a difference between taking a far shot on a 50mm lens and a close shot on a 35mm lens?
9
Why is the background bigger and blurrier in one of these images?
17
What is the difference between perspective distortion and barrel or pincushion distortion?
4
Does wide angle equivalent in crop sensor skew image?
5
Can a telephoto lens have a wide field of view?
2
How can I take undistorted overhead top view pictures of a stationary gas compressor?
2
How do i take a photo of an object perfectly vertical like a top view?
0
How does focal length change perspective?
0
Which Canon lens to get, EF 24mm f/1.4L II or EF 50mm f/1.2L
See more linked questions

8
What is ideal distance to subject for head and shoulder portraits?
3
Is distortion on an iPhone primarily due to perspective or does lens distortion play a part, and what can be done about it?
5
What is the relationship between field of view and focal length for fisheye?
4
How can I increase the flange focal distance (back focal length) of DSLR lens?
0
Focal length on Full frames and cropped sensors
1
Why are lenses characterized by focal length and not the effective field of view?
1
MFD equals 4x focal length? But published specs contradict that
4
Seeming contradiction on wikipedia about rear nodal points and how the principal plane is related to focal length