So I recently started taking pictures on my canon AE-1 it's my first time doing film but today I got my film developed and put into my computer but all of my pictures came out looking like this does anybody know what could have caused this? was it my fault? was it the camera store? 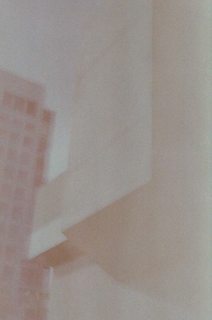 Bad film developing? Look at the edges of the film, you know, that portion with the sprocket holes. It is area clear bright orange? Can you easily read the edge printing? This will be frame numbers and batch numbers etc.? If the edges as between frame areas look normal, the film was not fogged to light and the processing was decent. If these areas are dense then likely you or the lab fogged this film i.e. it was mal-processed.

share|improve this answer
answered 2 days ago

When it comes to diagnosing a problem with a film photograph, you have to go back to the negative. Many things can change during the printing process (traditional darkroom) or scanning process, or even the scan -> print process. Because of that, if there is a problem to address, it needs to be addressed at the negative.

But, lets assume that:

If this is the case, then the problem is severe underexposure. Color negative film has a muddy gray look to it when even slightly underexposed...this image is noisy, muddy, lacks contrast and clarity...all signs of underexposure.

If you look at the negative and that negative is "thin", then this confirms severe underexposure.

Why your image is underexposed is another issue with a lot of potential culprits - but the most common is user error followed by faulty metering. Make sure that you are using new, properly stored film, that your camera's light meter works and you know how to use it. Then, with color negative film, err on the side of caution by overexposing all of your shots by +1 f/stop. Color-negative film was designed to handle severe overexposure with ease so give it some light!

share|improve this answer
answered 2 days ago

5
Missing photos on a roll of film?
2
Why did my whole roll of film shot with my Olympus Infinity Zoom come out blank?
3
Why did my 35mm film turn out “foggy”?
3
Why does it look like nothing is on my developed film?
4
Poorly developed pictures or camera issues?
3
Why did my 35mm film turn out white?
2
Why did only the last picture I took actually come out when developing a 35mm film roll?
2
Yellow tint over my developed portra 400 film
2
I’ve just gotten my film back and it’s come out with all different colours through the image
5
My negative is completely black and opaque — is this a camera problem, my mistake, or the lab's?