I recently used a rental RB67 and in looking at the 120 negatives I have noticed a pattern of two types of probable light leaks across all of the film that I shot (but fortunately only across some images in each roll). As it was a rental I no longer have that camera so the issue can't be fixed, so I'm just looking for a probable cause.

In the first case, there is a dark band covering the numbers along the bottom of the negatives. This only seems to occur on the last 3 or so images on the roll, and curiously this also only seems to occur on one edge of the film.. I suspect that when I removed the film from the camera that I didn't keep the wrapper tight. Is my assumption correct?

The second issue I have noticed is a probable light leak on one corner of some frames. There doesn't seem to be any pattern in which frames have this leak. The only explanation I can come up with is that I was changing lenses and that mirror was not perfectly sealing the film (and I wasn't using the dark slide when changing lenses - is that a bad thing?) But when I look at the images on either side of the affected one, they were all taken with the same lens. This may be explained by me swapping the lens to test the field of view and then going back to what I originally had. So any ideas on this leak? 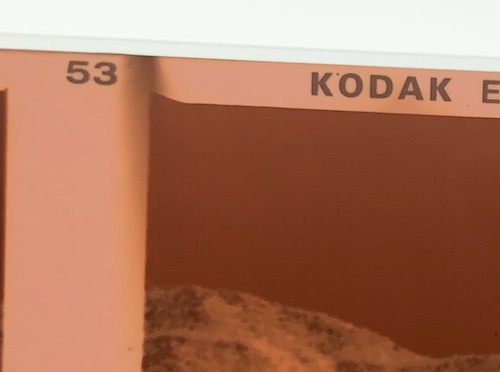 The first light leak along the edge of the film is either caused by the film not being wound tight enough onto the spool, or the spool itself not being completely opaque. Since only the last part of the film is affected, the film is likely not wound tight enough. That can be a problem with the film holder, or that you were a bit sloppy when unloading the film. As long as the light leak does not reach the exposed frame, it is not really a problem, but I usually wrap exposed 120 films in aluminium foil to prevent such problems at all. Both unexposed, as well as exposed 120 rolls are prone to such light leaks.

The second light leak looks as if the pressure plate in the film holder might not hold the film tight enough. There is likely a small gap between the film and the opening for the exposure in the back of the camera. This is also not really a problem, since the unintentional exposure is only outside the actual image frame.

7
What is a good technique for reproducing "light leaks" in post production?
3
Is this streak across multiple photos from a (35mm) Zenit 12SD caused by a light leak?
1
Possible cause of light leak in film SLR
4
Orange and other artifacts in photos from film camera
1
Why is there an over-exposed stripe on first several frames of film?
9
Developed film has dark/bright wavy line spanning across entire film
3
Portra 400 looks desaturated and has sprocket leaks
1
What causes these light leaks on bulk loaded film
0
Camera light leak or processing issue?