How do I get rid of this orange tint and reflection while keeping my label well lit and visible? 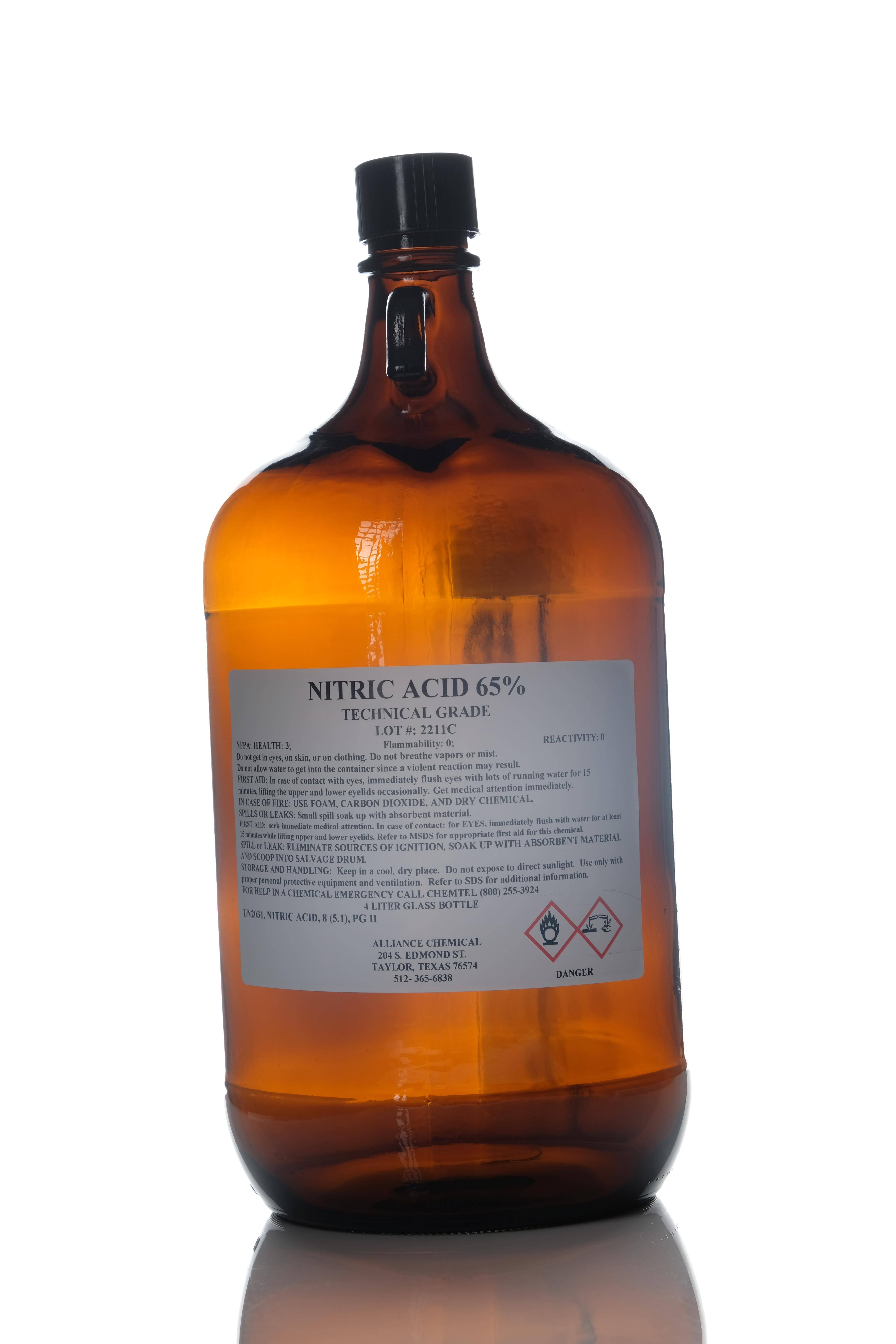 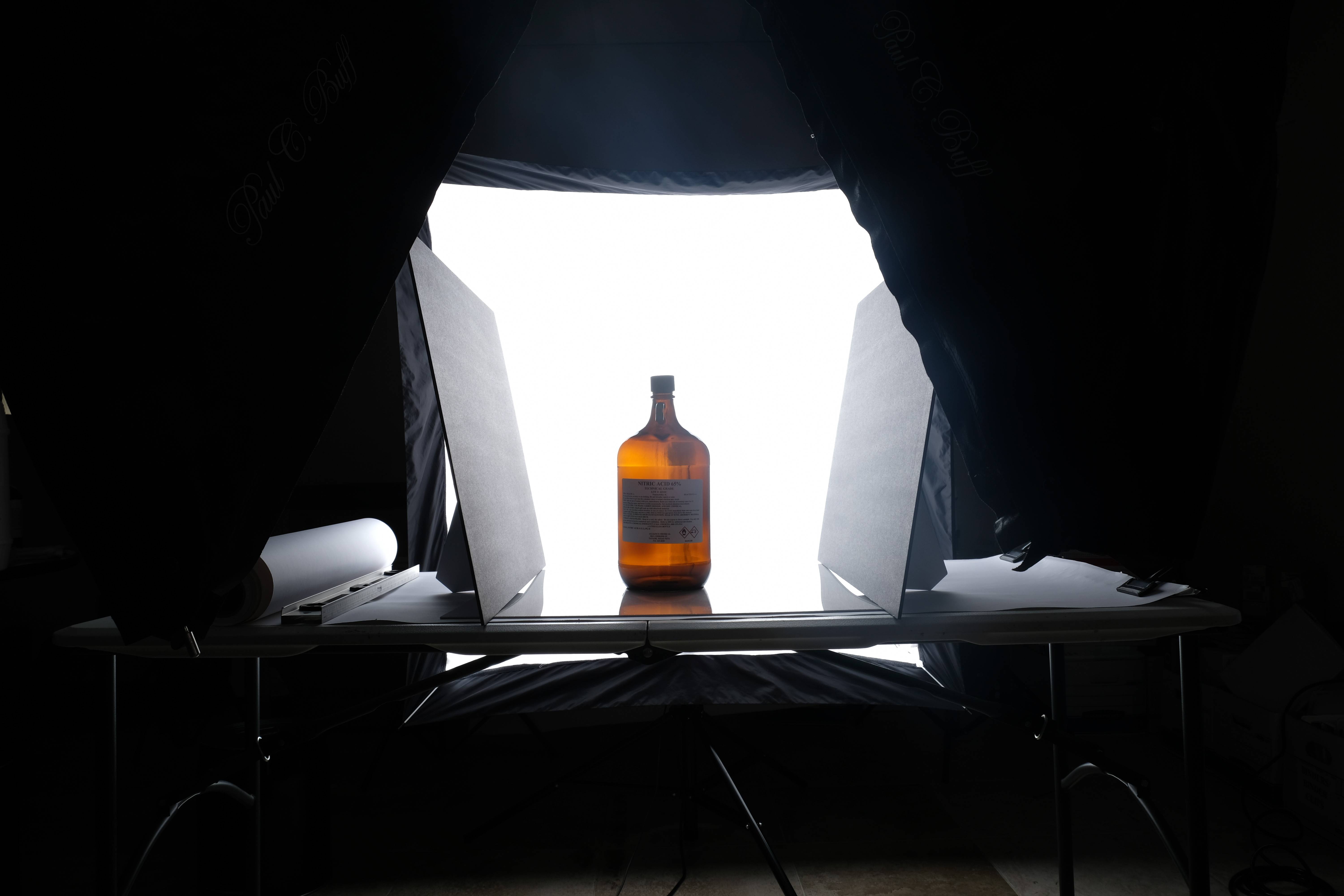 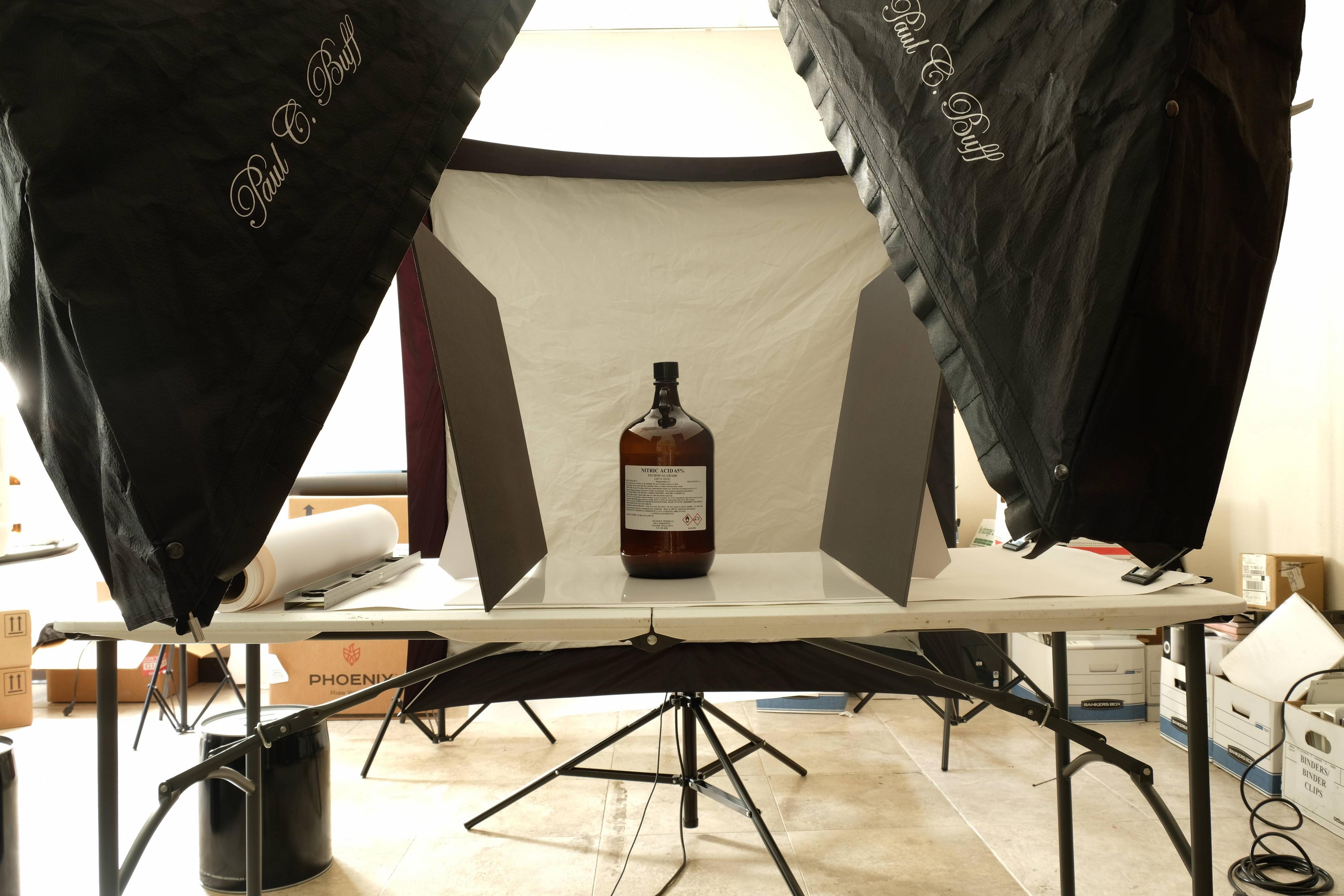 Linked are the images of my set up (2 grid strip boxes, 1 softbox, and using 3 x800 white lighting strobes). I'm using the large softbox as my background because I can't seem get my white backdrop actually white when I shoot. Also using an acrylic sheet for the subject platform and two black foamcore boards to produce a more pronounced edge to the object. This is shot at 50mm f9.0 1/250 ISO 100 on a fujifilm-XT2 with a tripod and wired trigger. The object is a glass container and doesn't look orange to the eye, however that's what I end up with. I tried to use a small speedlight to illuminate the label from overhead compose it in photoshop after, but both images are pretty bad. How can I change my set up or orient things differently to produce better images?

What's illuminating the softbox in the background? I assume not just the strobes? Whatever it is, you probably need to reduce its intensity until it's just barely saturating. The brighter the background is, the more light you're going to have coming through the bottle. (Or, conversely, keep the softbox lit as it is, adjust your exposure so that it just barely saturates, and then put additional light on the bottle but not on the softbox until the label looks bright enough.)

If that still leaves you with too much orange glow, consider also painting the back side of the bottle black (as suggested by Johanna M) and/or filling the bottle with some dark liquid such as ink or black fabric dye in water, black paint, molasses, Coca-Cola, etc.

(I assume that, whatever the label says, you don't actually have 65% nitric acid in the bottle. If you do, take it back to where you got it ASAP and get them to supply you with an empty bottle instead. You don't want to handle that stuff without appropriate lab safety equipment and training!)

One more option would be to replace the softbox with a blue background and edit it out of the final image using chroma keying. The reason I specifically suggest blue in this case is that it's the color that will shine the least through the amber glass of the bottle. It also conveniently doesn't appear anywhere on the label or on the bottle itself (although neither does green).

With chroma key, the background doesn't need to be (and indeed shouldn't be) saturated; it just needs enough illumination for the color to be clearly visible. You might even be able to use more or less just the indirect light present in the last image in your question.

Your primary issue is that your lighting ratios are wrong... you have more light coming through the bottle from the background than you have hitting the label from the front.

This is a common mistake... there are so many references to "blowing out the BG," and "expose it 1-2 stops over." What you ideally want is just for it to record as white, not blown; and white meters 1-2 stops above mid when properly exposed... if there is a significant texture you might need it to clip slightly.

In this case you do not even need the white BG to expose as white; you just need enough contrast between the bottle and the BG to make cutting it out/editing it separately easy.

Once you drop the BG some, the label will appear brighter/whiter. If that is still not enough I would add light on the label with a gridded/snooted light.

I would not use the strip/soft boxes from the front like that... they are going to show in the bottle and look pretty bad. If you want them to create a linear highlight then they need to be much closer.

Maybe you can paint the back of the bottle so the light can not shine through. Or glue something on the back that prevents the light from shining through the bottle.

Use a (oh damn I don't know the name anymore, maybe its something like "black wrap aluminium foil") Its a thik aluminium foil with black surface, that you can wrap around a flash or lamp to generate a custom light spot. And use this light spot only on the label.

Not the answer you're looking for? Browse other questions tagged product-photography studio-lighting fujifilm studio-setup or ask your own question.

2
What do I need to change to prevent this denim looking grain/noise in my product photos?
6
How can I improve my photographs of bedsheets for use in an online store?