How exactly does "lightness" function with regards to the chromaticity diagram?

Seeing as there isn't a colourimetry stackexchange, I'm asking here where a number of useful colourimetry topics have already been posted.

A number of excellent resources exist with regards to the ubiquitous CIE 1931 chromaticity diagram. This is noted to be the consequence of two consecutive projections, the first onto a 3D plane and the second onto a 2D surface. Also noted is the fact that the Y tristimulus value, corresponding to the CIE 1931 photopic observer, represents lightness due to the choices of the XYZ tristimulus values.

Despite the fact that the chromaticity diagram rigidly defines which colours are "real" and which are only imaginary, little explanation seems to exist for which values of Y (corresponding to which chromaticities) are valid.

For instance, this link seems to suggest that certain colours that appear to be in gamut will in fact be outside gamut at certain brightnesses.

Examination of David Macadam's paper "Maximum Visual Efficiency of Colored Materials" seems to suggest that there are indeed rigorous limits (Macadam limits) which relate to the illuminant under which the chromaticities are viewed. How exactly does this work?

In addition, I found this interesting claim in Billmeyer and Saltzmann's "Principles of Color Technology;"

Only colors of very low luminance factor, such as spectrum colors, can lie as far away from the illuminant axis as the spectrum locus; all other colors have lower purity. The lim- its within which all nonfluorescent reflecting colors must lie have been calculated (Rösch 1929; MacAdam 1935) and are shown projected onto the plane of the chromaticity diagram inFigure 4.28. They serve to outline the volume within which all real nonfluorescent colors lie. Although Rösch predates MacAdam, these limits are known as the MacAdam limits

This claim seems to be reflected on Bruce Lindbloom's diagram and the diagram included in Macadam's paper, in which luminosity drops to zero towards the spectral locus. Pure (or almost pure) spectral colours can be generated via a laser (or similar), and appear bright to the average observer. As such, to what do Billmeyer and Saltzmann refer when they suggest that spectral colours must inherently have a very low luminance factor? If this is the case, why is this low luminance (apparently inherent to pure spectral colours, and almost pure colours) capable of appearing subjectively bright?

To rephrase my question in a more specific way; looking at the three dots on Lindbloom's animated 2D-->3D gamut, the upper dot is out of gamut while the lower dot is in gamut (despite the fact that all three dots appear to be in gamut on the 2D view. How would I know which lightness (Y) values would be in gamut for any specified (x,y) chromaticity?

If green must be at half the value of red for a specific color, then the total potential luminance for that color will be less than for a color that allows both green and red to be at max value.

Think of it this way. When one is calibrating/profiling a monitor the first step is often to measure the monitor's output when a neutral white signal is sent to it. The monitor's red, green and blue channels are adjusted individually until the measuring device says all three primary colors are equal in brightness. Adjusting one of the colors also affects the relative strength of the other two. If I increase green, for example, the relative portion of the total signal that is red and blue go down. But what happens if I've already got green pushed to 100% and my colorimeter is telling me green is still weaker than red and blue? I can't increase green by any more. It's already turned up as high as it will go! I must turn down both red and blue until they are balanced with green and the output is neutrally white. At that point, that's the brightest the monitor can be and output white light. For any color other than white light, the monitor must be dimmer as at least one of the three primary colors is reduced in strength.

How would I know which lightness (Y) values would be in gamut for any specified (x,y) chromaticity?

The only way you could know is to use a 3D map. It is beyond the capability of a 2D map based strictly on chroma that can be produced by a system at lower brightness levels to show how the gamut for that system decreases as desired luminance increases.

Billmeyer and Saltzmann are speaking about the ability of trichromatic color reproduction systems capable of producing white light, not single wavelength lasers. Given enough power, it is possible for a trichromatic color reproduction system to produce green light as bright as your green laser. But such a system will necessarily be able to produce even brighter white light when all three primary colors are outputting at maximum brightness. "Low" and "high" are always relative to one another.

Note that the CIE 1924 Photopic Standard Observer models the wavelength-dependent sensitivity of the Human Visual System (HVS) to electro-magnetic radiation, i.e. Luminance and not Lightness which is perceived brightness and has a non-linear relationship with the actual physical intensity of the stimulus.

Luminance and Lightness are purposely ignored in the various chromaticity diagrams, only flavours of chroma and hue are represented. 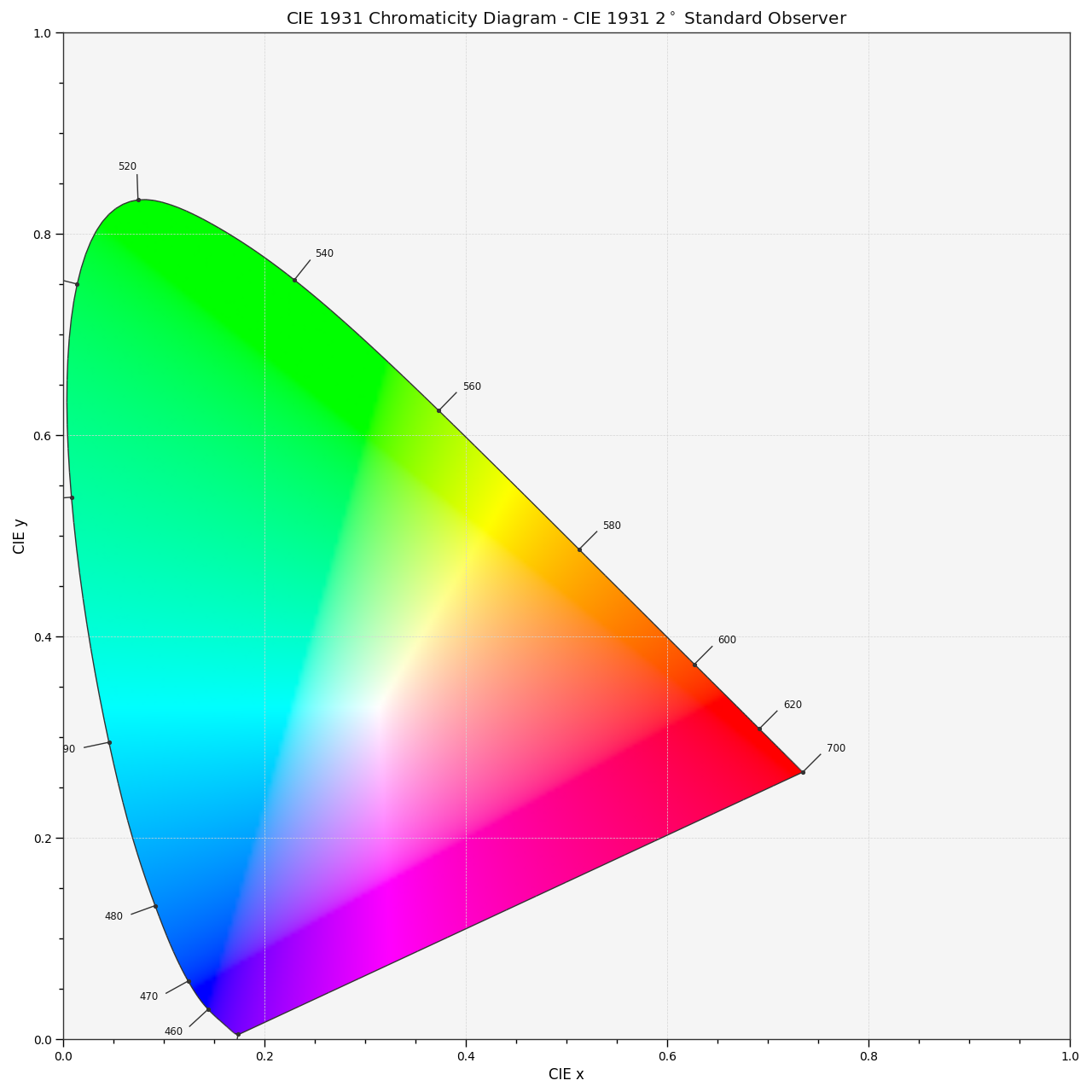 The CIE 1976 UCS Chromaticity Diagram, however, is built on-top of the CIE L*u*v* colourspace which is a perceptually uniform colourspace resulting from a non-linear transformation of the CIE XYZ colourspace: 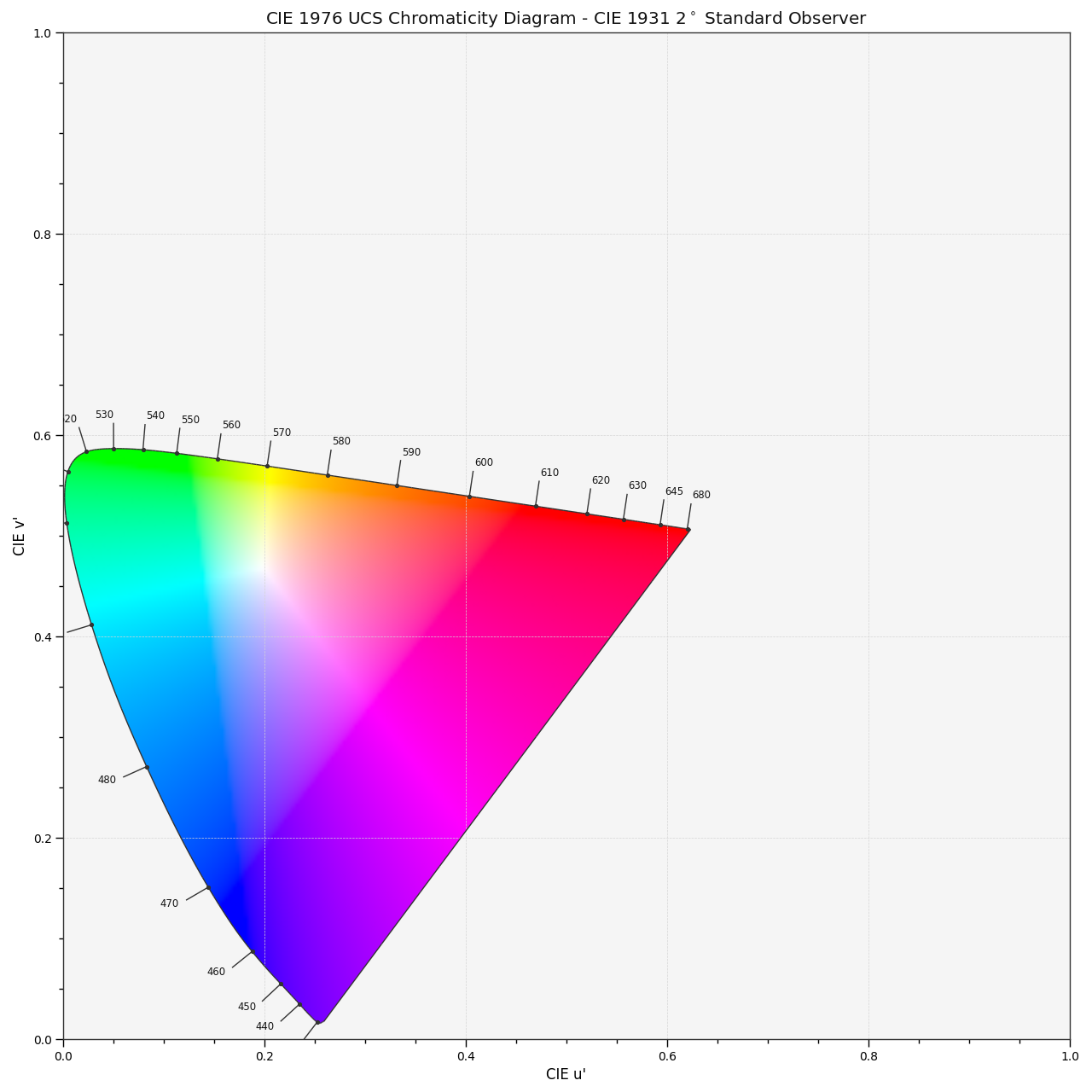 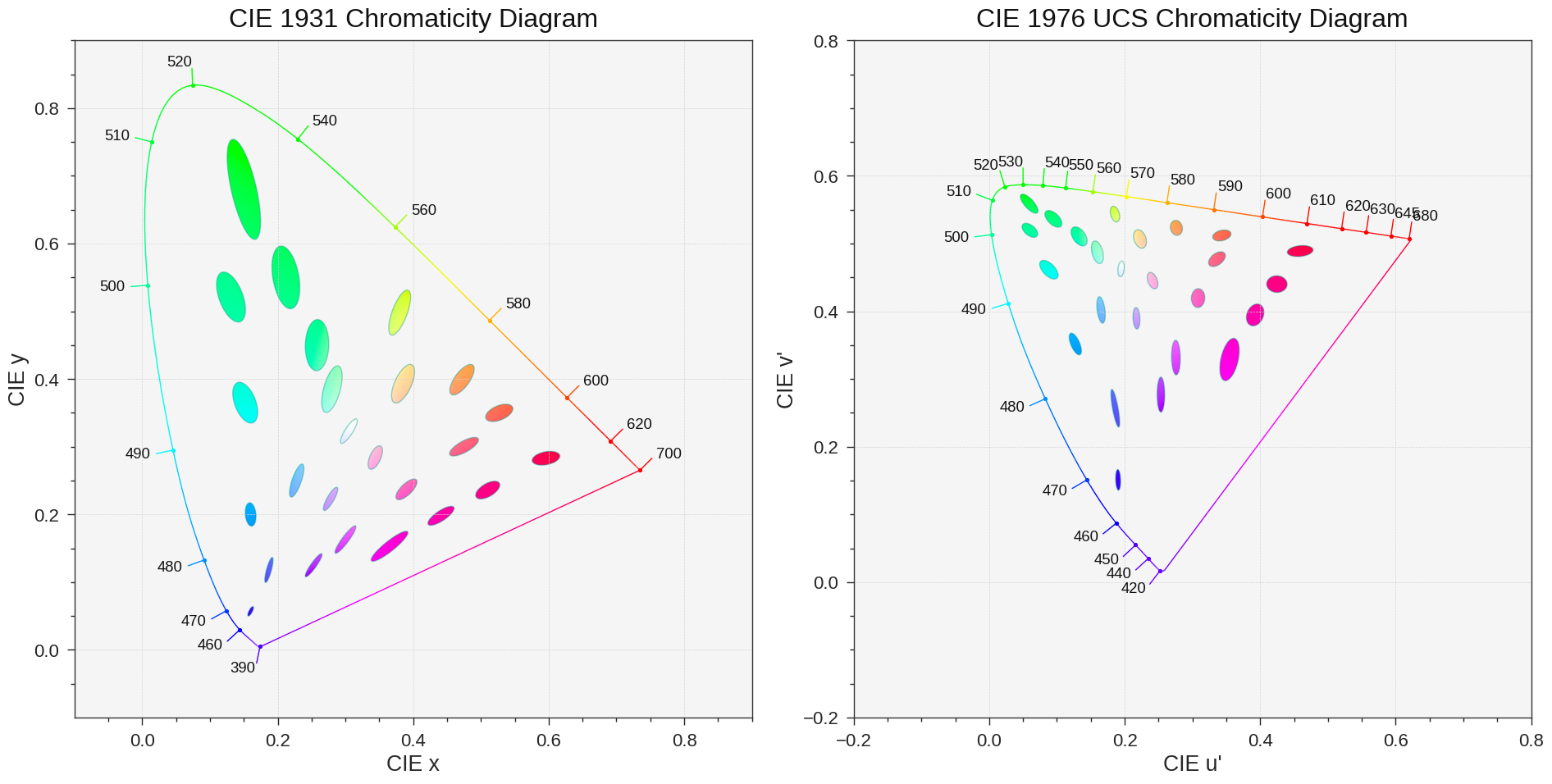 The diagrams are rendered with Colour.

4
What is the photopic luminous efficiency function?
18
How does the colour of ambient lighting affect colour rendition?
20
What is the function of the tint slider in Lightroom?
10
Does Gimp have a Match Color function similar to that in Adobe Photoshop?
42
Why don't cameras offer more than 3 colour channels? (Or do they?)
0
Does the d7000 have a problem with green tones?
4
Is it possible to buy chromaticity-plot color standards? If so, how, and where?
3
Is there a way to see CIE 1931 chromaticity diagram in its true color?