I have a Canon Rebel XTi with a 70-300mm lens. About 6 months ago, it started making a constant whirring sound every time I connected it to the camera. The whirring sound occurs even when (1) the camera is off, (2) the stabilizer is off, and (3) the lens is set to manual focus. I'm not sure if the noise is the lens trying to stabilize or refocus. I'm stumped...

Since "whirring sound" is such a vague term, here is a video

Any help would be greatly appreciated.

If all of your lenses do this on the Rebel XTi/400D and none of them do it on another Canon EOS camera, then at first glance the issue would seem to be with the camera body.

The more I think about it, the more it seems to me the problem here has to be in the camera body, since voltage is being supplied to the lens even when the camera is turned off. It seems that perhaps the IS module and aperture mechanism are both also being constantly actuated. The noise in the video sounds exactly the same as an IS unit in one of my telephoto lenses did when it was going out. It would make the noise and rapidly vibrate the image in the viewfinder the way you describe. 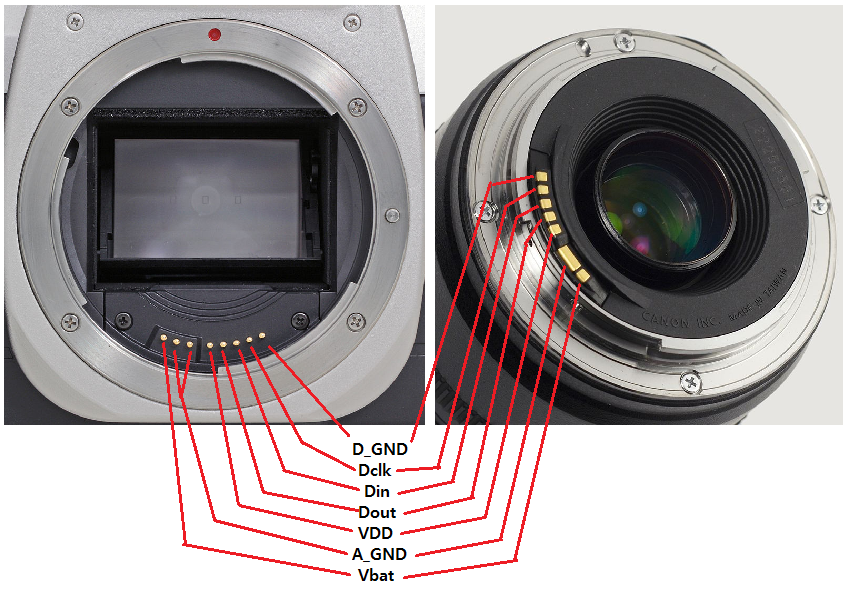 I've never really considered it, but the IS "On-Off" switch on Canon EF lenses with IS may only send a signal to the body to send a command to the lens to park the lens' IS unit at the "home" position, rather than disconnect IS from the camera's control (in much the same way "focus-by-wire" designs work - there is no direct connection in the lens between the manual focusing ring and the the lens' focusing elements). This would simplify returning the IS unit to the optimal "home" position and parking it there when IS is turned off. It would also explain why certain EF lenses need to have IS turned "Off" before being disconnected from a powered up camera body, as Roger Cicala has notably reported.

Frankly, in 2020, repairing a Rebel XTi/400D that was discontinued in 2008 is almost certainly not going to happen at any price. Just opening the camera up will cost more in labor than its worth, and even sources of used parts salvaged from other unrepairable copies have probably long since dried up. If the issue is with the camera body, one would suspect a main board replacement would be needed since the power switching circuitry is embedded in the main board for that model. It's time to consider another camera.

If any other lenses you have do not do this on your Rebel XTi/400D and this lens does it on any Canon EOS body:

The lens' IS module and/or its main printed circuit board (PCB) is totally fried. I've had a lens that would occasionally do this intermittently, though only when the camera was powered up. It was becoming more frequent when I figured out, by looking through the viewfinder and seeing the entire frame "shaking" or "vibrating", what was going on. Replacing the IS module fixed the problem.

Send it to Canon for service or replace it, whichever is more economically feasible for you.

I would imagine replacing the IS unit in that lens would cost at least $200 including parts if the lens is out of warranty. Canon's minimum repair charges for labor tend to be dependent upon the lens' retail price (when it was a current lens). I've never sent a sub-$1,000 lens to Canon for repair, so I'm only guessing. The "standard labor charge" for my EF 70-200mm f/2.8 L IS II was $269 before any CPS discounts in both 2014 and 2017.

Not the answer you're looking for? Browse other questions tagged lens troubleshooting image-stabilization or ask your own question.

16
When removing a lens, does Image Stabilization need to be turned off on the lens?