Should I crop photos from a prime instead of using a zoom lens?

I wonder whether using a compact, bright, fixed focal lens instead of a large zoom lens will yield comparable results in terms of light gathering ability and resolution.

I am not interested in negligible lens distortion aspects, and consider perspective to be only determined by subject distance.

Could I compensate for the lack of zoom lens simply by cropping? Will I get similar results, and if not, what is the difference?

Note that this question is similar to this thread, but more focused, and that I have already given some thought about it so that I prepared my own answer. I will accept the best answer in two weeks.

Bright, sharp primes, when paired with high-resolution sensors, can be a viable alternative to slower, variable aperture zoom lenses and enable effective zooming. Constant aperture lenses, if you can afford the price and bulk, are the better choice. The exact impact on resolution and light capture will depend on the exact lenses being compared.

I did a fair bit of research about this for a camera purchase, and I thought I could share it with the community.

How well cropping compares with the performance of a zoom lens depends on the zoom lens (of course). It is quite obvious that constant aperture zooms will be better than cropping because they maintain the same light quantity even when zoomed-in. But I wondered: how much better are variable aperture lenses for capturing light, compared to cropping?

When we take central crops from a photo, we reduce the angle of view (i.e. we zoom). However, by cropping, we also effectively reduce the amount of light that makes up our image (see equivalence). The light loss that happens with cropping is quite predictable: there is a linear decrease with resolution.

Thus, cropping results in an image that is lower in resolution but otherwise equivalent to a natively zoomed image with a higher F-number. For instance, a reduction in image size of 50% would equate a loss of 1 EV (a halving of the light quantity) and therefore be equivalent to a loss of 1 aperture stop. I verified that by comparing the crops from an image at 35 mm equiv. F2.3 with the calculated equivalent images taken at 50 mm F3.2 and 75 mm F 4.5.

They are very similar, and I share them together with the code and files I used for calculating everything in R here.

Note that here we assume that we have sharp lenses that are capable of resolving the camera's sensor. Also, zooms can lose some sharpness at the tele end.

Zoom against its own at wide end 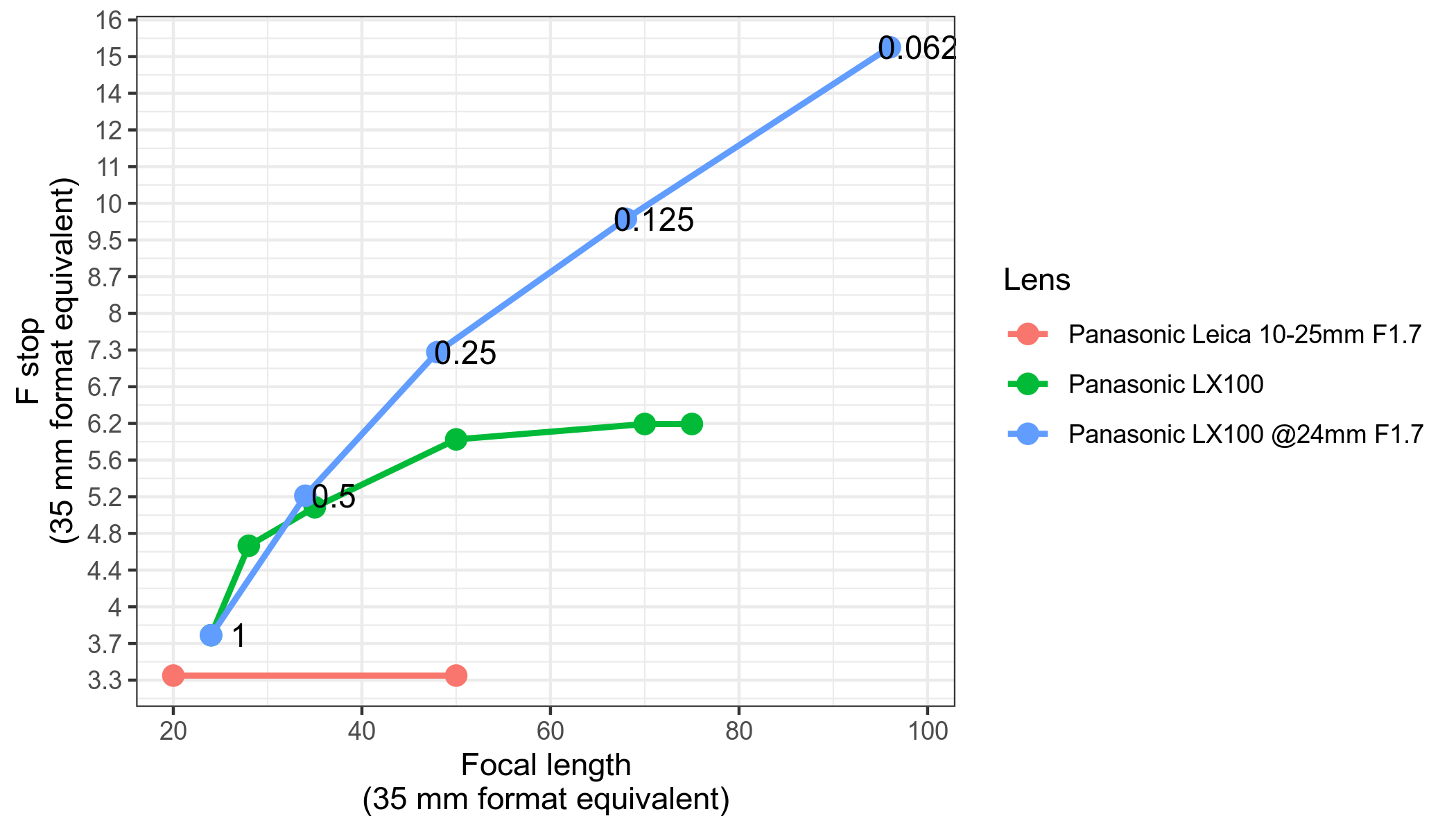 Here is the comparison between a typical APS-C kit lens and a modestly bright and wide prime: 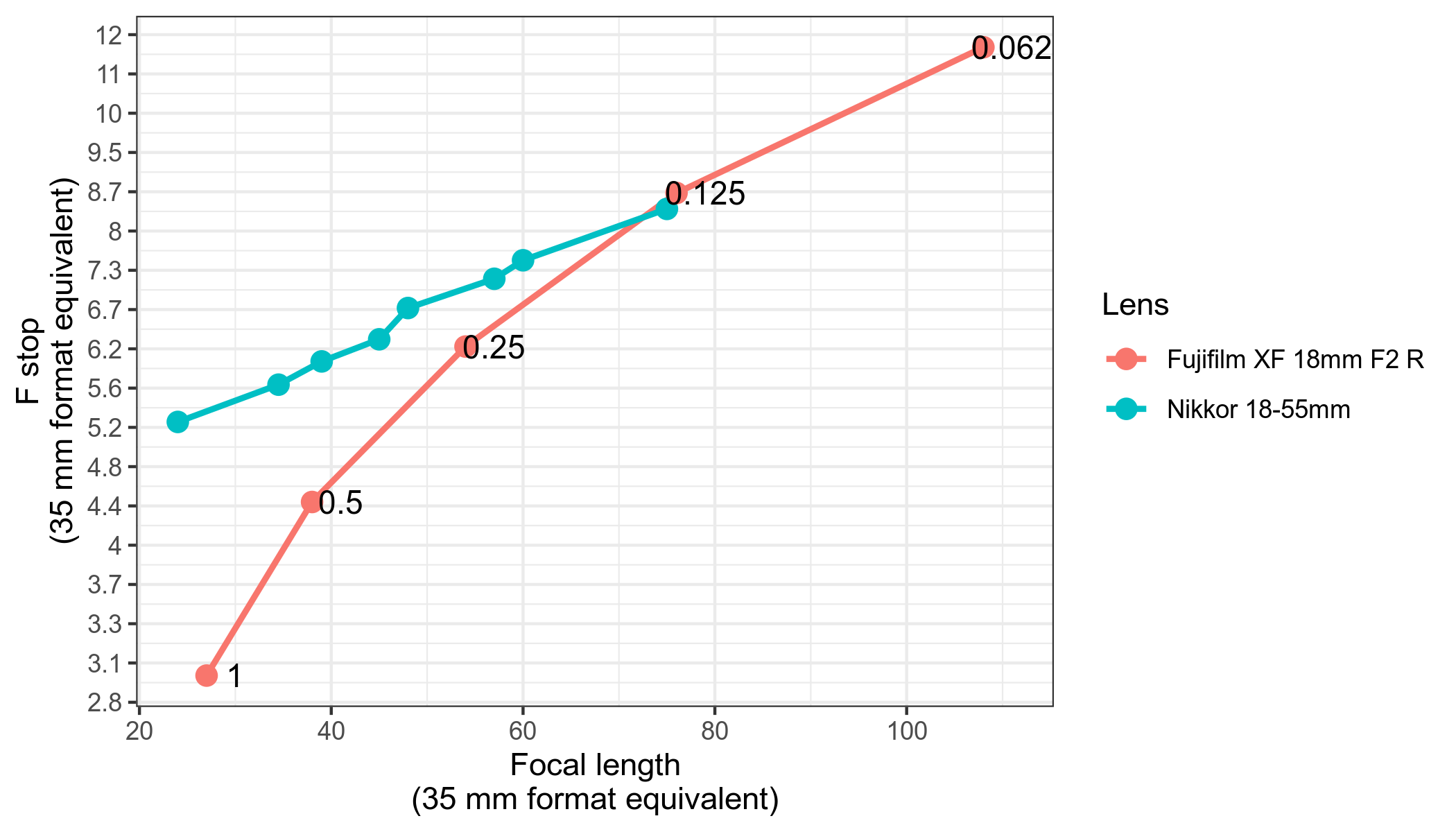 Here is a comparison between a longer zoom lens and a brighter prime: 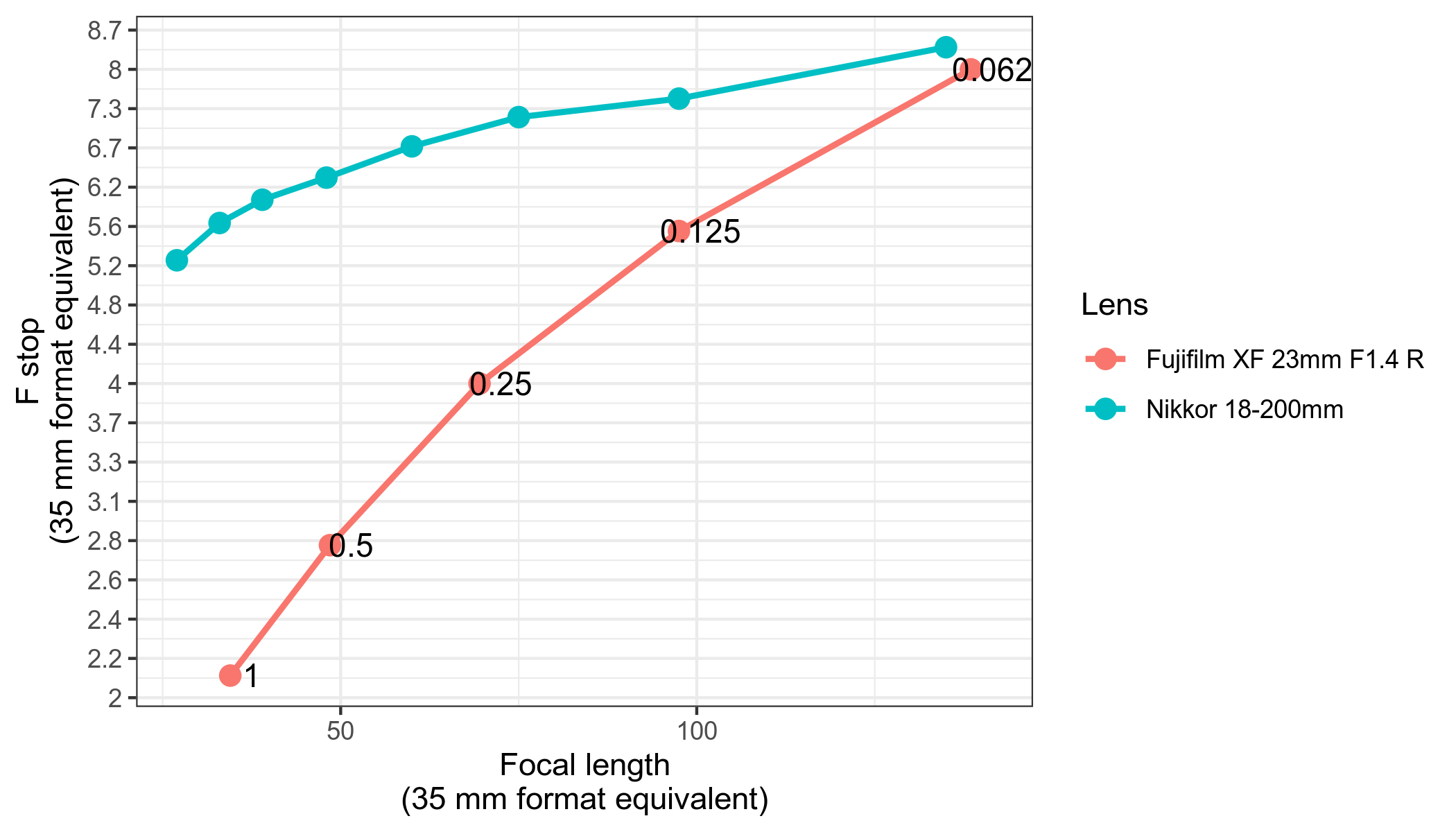 It seems pointless to buy kit zoom lenses, but that is not new. In other words, variable-aperture zooms look only somewhat better than cropping when it comes to light capture, and seemingly only serve to maintain high resolution when zooming.

The answer is, not surprisingly, "it depends on the lenses being compared."

You are correct that cropping results in a loss of light. In fact, it is the FL cropping (increased magnification) that causes a zoom lens to have a "variable aperture." In reality the aperture diameter remains the same size; so the f# changes relative to the change in FL (crop/magnification). But f#'s are not exact (often rounded) and do not necessarily directly correlate to light transmission efficiency (T-stop), so there may be some variability there.

And typically it is not sensor resolution that limits the recorded resolution. A Nikon 500/4 delivers approximately 18MP on a 20MP D5, and 8MP on a 20MP D500 DX body. Which should not be surprising because a DX crop of the 20MP D5 frame also leaves ~ 8MP remaining. But it doesn't produce the full resolution of either sensor... it is the lens that is the limiting factor (and the D5 has an AA filter).

In order to increase the recorded resolution requires a lens which is sharper at a wider aperture, and used at a wider aperture; which is more easily achieved with faster/wider prime lenses. But just because a lens is a wider prime does not necessarily mean that it is going to be sharp enough to offset the loss of resolution due to cropping compared to the (potentially lesser) loss of resolution when zooming with a variable aperture lens.

BTW, this is very similar to the conundrum one faces when deciding between cropping a native lens or adding a teleconverter (variable aperture FL zoom/cropping). And the results are quite often the same... negligible difference. But it does really depend on the specific lens/TC in question.

I thought I would be better off cropping from a prime lens than zooming with the kit lens such as the Sony SEL 16-50 f/3.5-5.6 or the SEL 55-210 f/4-6.3 but I was wrong. However, I was not happy with the results from either of the kit lenses. Then I purchased a better lens, the Sony SEL 18-135 f?3.5-5.6 and decided to test this to help me decide whether to purchase the Sony SEL 70-350 or a fast zoom like the Tamron 28-75 f/2.8. In my tests it was clear that When zooming in with a good zoom lens such as the Sony Sel 18-135 f/3.5-5.6 which is very sharp, it is better than cropping from a prime such as the Sony SEL 85 f/1.8. For example, a close up portrait at 135 f/5.6 is better than a cropped image from the Sony SEL 85 F/1.8. This only failed when the image was a busy one with a lot of small details because the then noise reduction caused loss of detail since I had to use a higher ISO. For posting to social media, it made little difference. Now I have the SEL 70-350 and I can get similar results as those of the 85mm F1.8 when the light is good by stepping back a little and zooming in. However, in low light and busy scenes, the prime lens is always going to win.

Not the answer you're looking for? Browse other questions tagged zoom prime cropping or ask your own question.

3
What is the difference between zooming in and cropping?

23
Which scenarios are better shot with a prime lens versus zoom lens or macro lens?
21
Fast prime vs. expensive zoom for indoor sports photograhy?
15
Would a prime be redundant with a fast zoom?
3
Zoom Lens and Prime Lens Photo Comparison
9
Should I postpone buying a zoom lens until I've learned to zoom with my feet?
2
Am I correct that photos from the 16-50 lens won't be much better than cropping photos from the 35mm prime?
13
Other than speed and weight, what advantages might a prime lens have over a zoom at the same focal length?
3
What difference is there between the 50mm in a zoom lens, a 50mm prime lens, and a 50mm macro?
24
Why buy prime super telephoto lenses instead of zoom super telephoto lenses?
0
What lens should a new photographer consider starting with? (prime vs zoom, focal length, etc)