Both my camera (Canon 6D mkII) and my raw processing app (Lightroom) can do "Lens aberration correction". Which should I use?

I mostly take pictures in RAW with a Canon 6D Mk II before processing them into Adobe Lightroom. I've historically always used Adobe's "Lens Correction" feature to automatically detect the lens/camera combo and apply image corrections based on the profile of this: 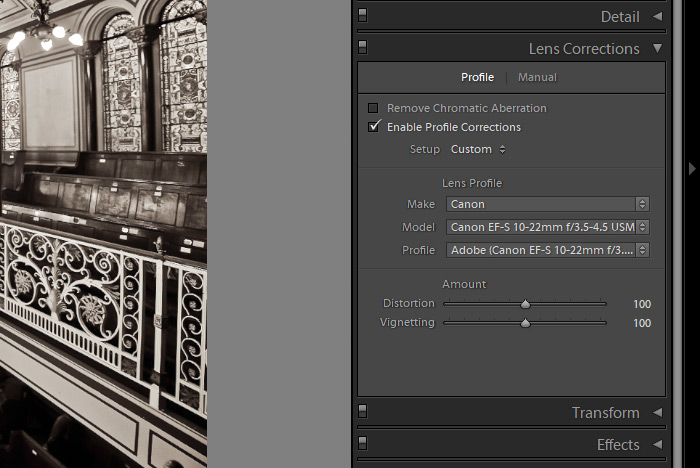 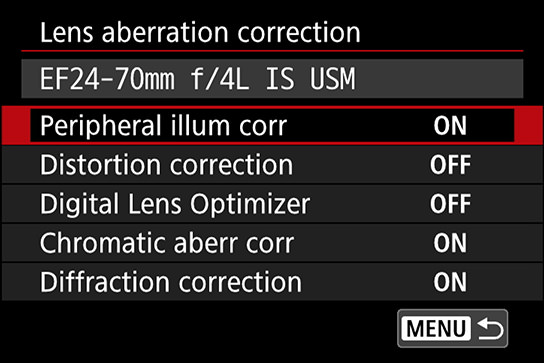 For the moment, all of these are "Off" on my camera.

Which is generally preferred? How does enabling this feature in the camera affect the RAW file that gets generated, and can RAW image managers detect that the camera has already applied a correction?

These features affect only the JPEG generated in-camera. For RAW processing, you can achieve the same results in Canon's DPP. Or use LR.

Which is generally preferred? How does enabling this feature in the camera affect the RAW file that gets generated, and can RAW image managers detect that the camera has already applied a correction?

This is not universal, however.

Although it does not affect any lens you can use with your EOS 6D Mark II, one should be aware that with some lenses, such as the new RF 24-240mm f/4-6.3 IS lens, there is a significant amount of lens correction going on with the camera generated JPEG that can not be turned off in camera. This is similar to many small, light, and inexpensive lenses sold for the Micro Four-Thirds format as well as some of Sony's E-mount lenses. Rather than correcting for most distortion and vignetting via optical lens elements, as is generally the case with Canon's EF lens line, they've left the correction to the post processing pipeline. Many raw image editors automatically apply some or all of the correction when opening the raw file, regardless of what options are selected in the raw application. In the case of the aforementioned RF 24-240mm, the actual raw file includes more information at the edge of the frame that is not displayed by most mainstream raw editors/convertors. The actual angle of view provided when the lens is zoomed all the way out to 24mm is more like 22mm, then distortion correction crops back to a 24mm angle of view.

Not the answer you're looking for? Browse other questions tagged canon lightroom lens-correction or ask your own question.

8
Where can I find user created camera and lens profiles for Lightroom 3 and Camera Raw 6.1?
7
How to force Lightroom to use a specific lens profile?
2
Apply a modified camera profile when importing from a 5D-II to Lightroom
7
Does Lightroom take sensor size into account when applying lens correction profiles?
8
Why does lens distortion correction in Capture One also crop?
5
Where Can I Find Lens Correction Profile Files (for RawTherapee and Other Apps)?
1
How is the EOS Lens Registration application and data intended to be used?
5
How can I avoid vignetting when shooting in raw with a Canon Powershot?
1
Mirror the settings of Sony's JPEG generation on the RAW (*.arw) file opened in Lightroom?