Why are adapters for slightly too-short backfocus lens mounts not made with just a thick glass window instead of a lens element?

If there is a reason this is not done in commercial, DSLR oriented adapters, would that same reason also make this an unsuccessful solution for eg adapting X-ray relay lenses to DSLMs (think glueing something like an Edmund #38-055 onto the back of the lens)?

Camera lenses are converging lenses, meaning they have positive power. A simple convex lens will do this job, however, the image is flawed. I am talking chromatic aberration whereby each color will come to a focus at a different distance downstream of the lens.

Now a negative lens diverges and a positive lens converges. Additionally they display opposite chromatic aberrations. The lens maker corrects by combining strong positive lens elements with weak negatives. The result is an achromatic (without color error), well nearly but not perfection.

The focal length is a measurement taken when the lens is imaging a far distant target. This will be the shortest back-focus. If the lens and its mounting are mismatched, the infinity focus (the shortest back-focus) may not reach film or digital sensor. To correct, we must somehow shorten the distance lens-to-sensor/film or lengthen the back focus.

The only way to lengthen the back focus is to impose a weak negative (diverging) lens. This procedure actually lengthens the focal length a smidgen. Now a single element negative will do this trick, however, such a lash-up adds to the chromatic aberration.

The countermeasure is a doublet, one with negative power and the other with positive power. The powers are adjusted so the combination has negative power. This is a common trick used in telescopes, called a “Barlow”. This classic supplemental lens array is exactly what is needed to lengthen out a back-focus error.

Incidentally, an optical flat, either before, in-between, or behind the lens elements of a camera lens will microscopically lengthen the focal length so what you propose could be accomplished provided the optical flat was quite thick. Sorry this original post was in error. On with my duce cap, in the corner for two hours.

Because in many cases the flat glass needed to lengthen the back focus by the needed amount would need to be thicker than the entire registration distance.

The effect of flat glass is so miniscule that it would take glass thicker than the space available to get the desired additional back focus distance for most applications.

Flat glass would also introduce many of the same issues that a weak diverging lens would, to pretty much the same degree as the amount of distance it lengthens back focus.

Because it won't work. It won't lengthen the back focus enough. That is, a flat optical element shifts the focus by an amount less than the thickness of that flat element.

In the following diagram, a marginal ray (the red ray) from the edge of the lens's exit pupil of diameter d is focused at the back-focus distance b. That ray approaches at an angle 𝜃₁. 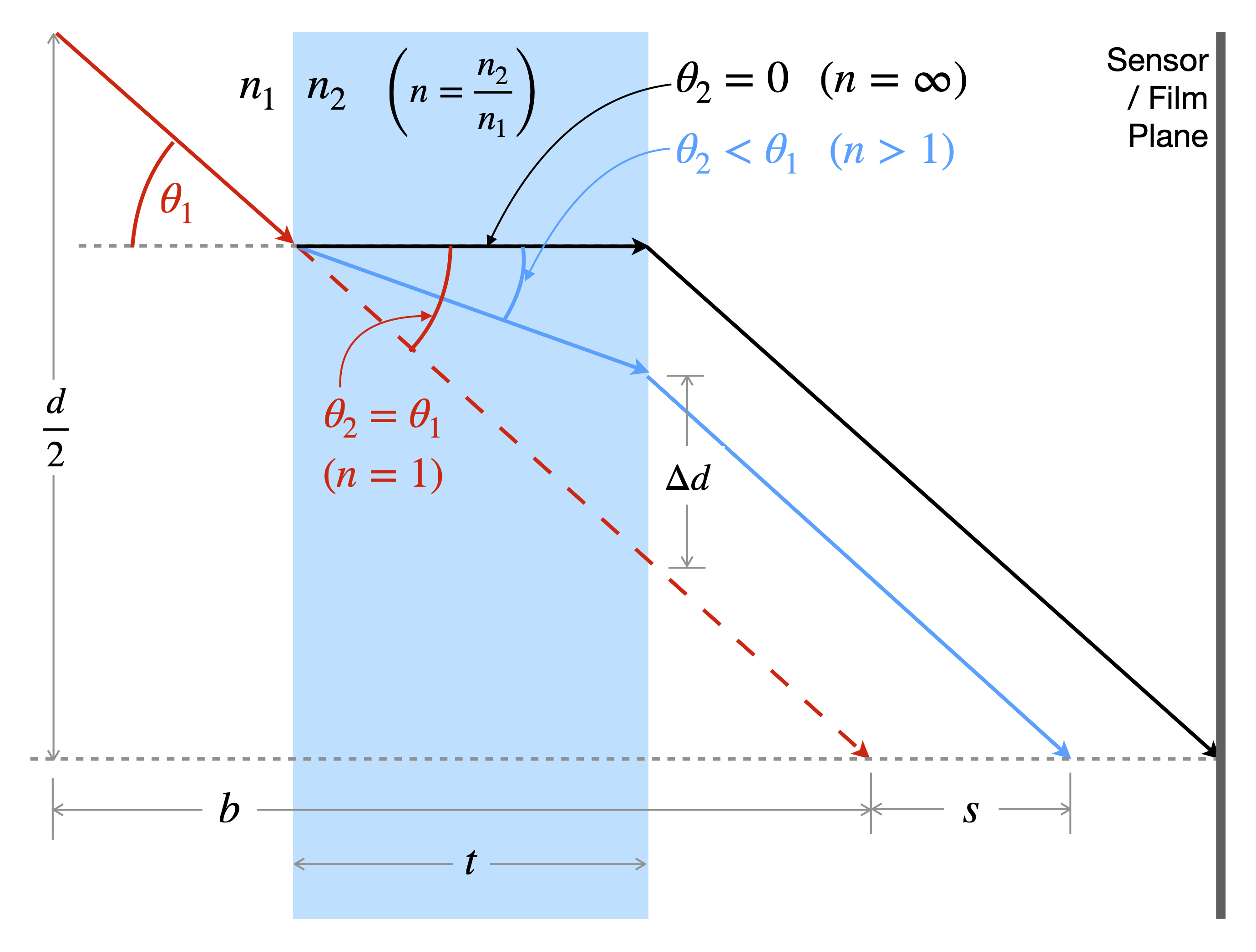 For convenience's sake, I will normalize the refractive index with respect to air (n₁) with: n = n₂/n₁.

Mathematically, the amount of shift s is given by:

where m = d / (2 b) = tan(𝜃₁). For a lens focused at infinity, this is just the exit pupil half-diameter divided by the focal length of the lens.

You can see from the equation that the radical in the denominator is always greater than 1, for real-world optical glass elements with refractive index greater than 1. Thus, the entire expression in the parentheses that multiplies t is positive and less than 1. So the shift s is always less than t for real world materials.

I keep saying "real world materials", because there are some metamaterials that have been built that have a negative refractive index, which would theoretically replace the need for concave (diverging) elements. Most of the negative-index metamaterials constructed so far are not transparent to visible light.

Not the answer you're looking for? Browse other questions tagged optics lens-design lens-adapter or ask your own question.

1
Why are filters only added to the front of the lens and not the back, too (or even the camera)?