Will a Nikon D810 give me more fine detail than a D610 for macro enlarged shots?

I do a lot of photography that focuses on tiny details usually with marine animals such as coral. I am in need of a camera that produces a photo, that even when enlarged from a macro point, it retains clarity.

I realize getting closer is often the answer, but there is a limit to how close I can get to the subject. One, they are often under water, two there is a pane of glass between me and the subject.

This is for biological details. Yes a nice picture for other applications is nice, but the most important feature is the ability for me to enlarge the photo to the point where tiny details can be seen to record.

So here's my question: How much of a difference is there between the enlarged photos of a D610 and D810? And will the difference be enough to affect details. I have enclosed a photo of the type of clarity I need and how large I need a photo to be to get those details. 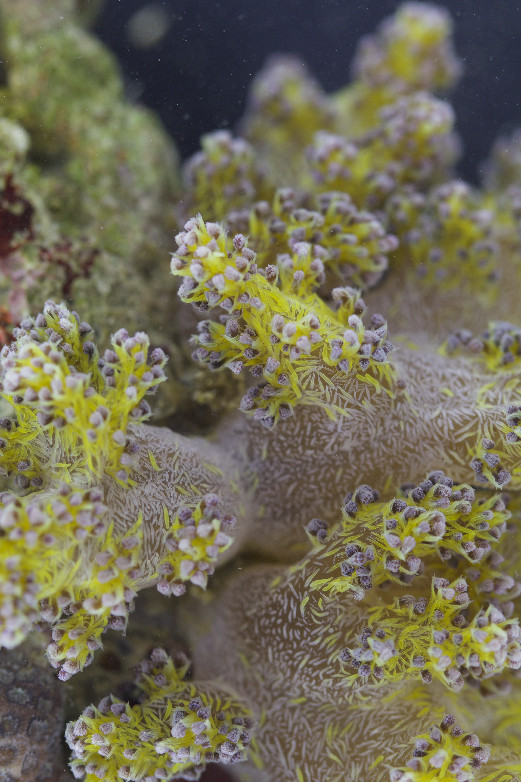 The entire coral in this picture is less than three inches tall. I don't know that exact limb, but I'd say a half inch at the most. The polyps are about 1/3 the size of a grain of rice. And no the depth of field on this one isn't terrific, however the sharpness of the photo, where it is in focus, is. I did not take this photo, it was done by a lab with a DSLR camera.

The distance from the subject in that photo is probably 9-15 inches. I didn't measure it when they did them, but it wasn't right up on the coral which was submerged in water. Also, this picture isn't cropped. This is the entire picture that was in the frame of the shot.

The camera I currently use is a D90, tripod, timer, 60mm macro lens, low ISO. When I enlarge my photos to match the size of this one, they don't pixelate. Rather they become noisy and details blur out.

What kind of lighting are you using? I think that is where a lot of potential for improvement lies. With textured subjects, the angle(s) of your light source(s) with regard to the camera's optical axis can make a significant difference in contrast and the amount of detail you can see.

Using flash will also allow you to "kill the ambient" and freeze any motion caused by the water moving around in the tank. Even though your shutter duration may be fairly slow (at your camera's flash sync speed), if the only light that makes a major contribution to the image is from your flash(es), then the short duration of the flash will freeze the motion.

The fact that your subjects are usually inside aquariums does present additional challenges, but they're not insurmountable. Much of what is discussed regarding lighting in this question about photographing fish in an aquarium would also apply to your situation.

Your 12 MP APS-C D90 has the same pixel density as a 27 MP FF sensor would, so you'd actually be losing a bit of ground with the D610 at 24 MP, but the 6% linear difference would be negligible. You'd just get more in the frame with the same lens. The D810, on the other hand, has a 36.3 MP sensor. In terms of linear resolution, that's a 23% increase over the 90D which could be significant if your lens is up to the challenge.

Which brings us to the lens choice, which is where all macro photography should start.

We should probably pause here to define a few terms:

To be able to use maximum magnification with subjects that are more than 2-3 inches from the side of the aquarium, you'll need a longer focal length macro lens than your current 60mm lens.

The following working distances are for each lens at 1.0X (1:1) maximum magnification:

There are plenty of other questions/answers here regarding technique for doing macro work, but we'll mention a couple of things that many folks new to macro work can easily miss:

There will be minimal difference; particularly for macro type photography where the aperture generally has to be stopped down in order to achieve a usable depth of field.

The D610 has a pixel size of 5.95um and the D810 has a pixel size of 4.87um. In order to resolve all visible light wavelengths to that size requires a (theoretical) perfect lens used at f/2.8 (red 4.8um, green 3.8um, blue 2.7um). At f/4 the same lens would project red light at 6.8um in diameter. And at f/8 even the blue wavelengths would be at 7.8um. But we can safely assume that the lens in use is not perfect, and the results will be at least one stop worse.

If I use DXO's measurements of a very good long macro lens such as the Sigma 150mm, it shows that the lens is sharpest at f/4 and delivers 18MP on the D610 and 23MP on the D810 when at f/4. By f/11 it is near 12MP on both sensors. The higher resolution sensor always gives some small gain in recorded resolution due to oversampling, but it is seldom anywhere near what the specs would indicate.

But you are also indicating that you don't actually need much recorded resolution at all. The attached image is less than 0.41MP in resolution, and the amount of detail it contains is significantly less than that.

In this scenario a camera of even less resolution like a 12MP D3 might actually be more beneficial due to it's much larger pixel size (8.4um)... However, another consideration is that only the D810 does not have an AA filter which gives it another potential advantage. And when operating with settings/situations that do not allow you to maximize the D810's resolution, the recoded images are still not any worse. That's why I own/use a D850, even though I seldom actually benefit from it significantly.

EDIT: Based upon the added information of camera/method used, I would say your main issue is lighting and shutter speed, or rather, shutter speed which better lighting will help with. When working with longer SS's there are many things that can contribute to a lack of sharpness... mirror slap, floor vibrations, etc. And even if you mitigate all of those things you are still going to have an issue.

My best suggestions to improve your results: Make certain the lens axis is exactly perpendicular to the glass face of the tank. Get the SS up to at least 1/250 if at all possible (or use off camera flash). Turn off the current/pumps if possible.

The pumps and SS are somewhat reciprocal; you can probably get away with a lower SS w/ the current/pumps turned off. But the first point is pretty critical... I suspect a lot of your noise/blur is actually due to off axis diffraction.

Not the answer you're looking for? Browse other questions tagged nikon macro sharpness noise or ask your own question.

0
What do I need from an off-camera flash for lighting an aquarium?
1
Macro - extension tubes vs reversal - how to choose?

9
How much better is a macro ring flash than a “normal” external flash, for macro shots?
7
Are there macro focusing techniques for handheld shots?
1
Will Nikon D lenses work on a Nikon D810 camera?
0
Does one get more detail beyond the minimum focus distance of a macro lens?
1
Will a telephoto lens give me better macro results with extension tubes than a 18-55mm kit lens?
5
Tricks to maintain constant range in macro photography panoramas
9
Nikon D810 and D610 firmware update photos not exposing the same now
1
Is this the limit of the camera image quality or is the subject out of focus?