I recently started using the Nikon f and I’m unsure about what settings are supposed to be used with 400 speed film! 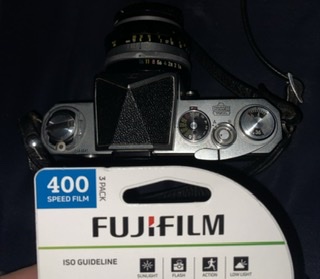 Make sure that you understand what settings are influencing image exposure.

Image exposure can be influenced by three settings, but two principles: Either the amount of light that is used to expose the film is varied (aperture and shutter speed) or the sensitivity of film can be changed in order to be able to shoot in very bright or rather dark surroundings. These are the three settings:

3) Film speed, often denoted with a ISO or ASA number. Changing from an ISO 200 to an ISO 400 film, increases the light sensitivity by a factor of 2. The amount of light does not change.

Typically an exposure meter is used to determine which shutter speed and aperture combination leads to a correct exposure. The exposure meter needs to know, which sensitivity the film is using.

12
What is the relationship between ISO, aperture, and shutter speed?

5
Why am I getting a slow shutter speed with Child mode on Nikon D3100?
6
Nikon Coolpix P510 - Recommended low-light settings?
3
What settings should I use for taking a picture of snow in low light?
0
What to do when a Nikon J1's settings and indicators work but the screen is otherwise black and won't take pictures?
12
NIkon D5300 Flash problem plus getting different images with the same settings
1
Image stabilizing settings for panning photos
0
Nikon D500 + Tamron 18-400 or Sony RX100 m6
0
Is the flash on a Nikon D5600 supposed to pop up and fire automatically, if so what camera settings to achieve this
2
How do I troubleshoot my Nikon SB-400 accessory flash?