Why are some zoom lenses "soft" at either end of the focal length range?

As one reads about zoom lenses, a relatively common comment that comes up in reviews of some lenses (especially lower-priced lenses) is that the lens is not as sharp ("soft") at one or both ends of the focal length zoom range.

Why would a lens have differing levels of sharpness at different focal lengths, and why would the extremes be the worst?

Let's start by a quick review of how a zoom lens works. Consider the simplest possible lens design -- a single element. One big problem with a single element lens is that the focal length of the lens determines the distance the element has to be from the film plane/sensor to bring a scene into focus, so a 300 mm lens (for example) would have to be 300mm away from the sensor to focus on infinity. Conversely, wide angle lens would need to be really close to the film plane/sensor to focus on infinity.

Lens designers soon figured out a pretty cool trick though: they could create a long effective focal length by putting a short focal length element at the front, and a (slightly weaker) negative element behind it. With the negative element, the light hit the film plane at exactly the same angle(s) as if it had been refracted by a long lens. Exaggerating a bit (or a lot), we get a substitution like the following: 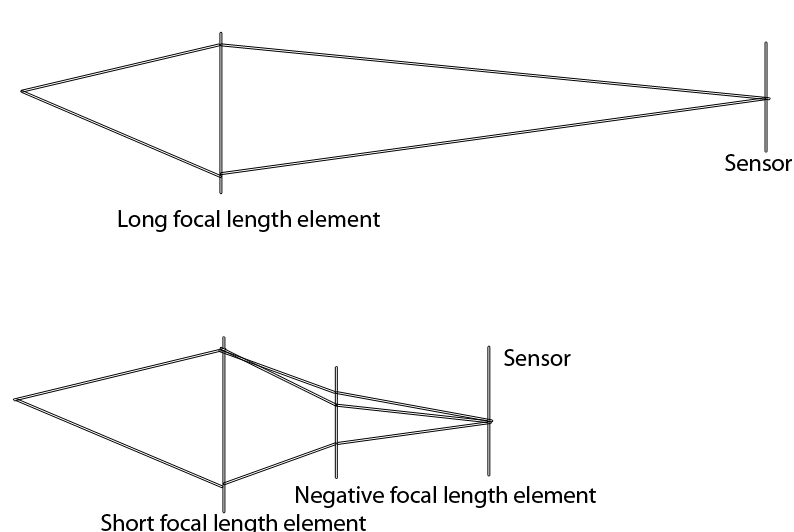 Both lenses have he same effective focal length, but (obviously enough) the second one is physically quite a bit shorter -- it doesn't have to stick out the front of the camera nearly as far.

The doubled upper-line in the second design, however, brings us to our second point: chromatic aberration. The "inner" line represents blue light going through the lenses, and the "outer" line red light. Because of its shorter wavelength, blue light is always refracted (bent) more as it goes through a lens than red light is. Depending on the glass, however, the difference between the refraction of the red and blue light may be quite large or relatively small.

With a zoom lens, however, things don't work out quite that easily. To get a zoom lens, we take the second design, but move the rear element relative to the front element. In this case, if we move the front element forward, the blue light will have diverged less from the red when they enter the second element, and since there's no more room behind the second element, it'll be bent more -- as a result, instead of coming into focus exactly together, the blue light will end up "outside" the red light, which will show up in the picture as chromatic aberration.

If we left it at that, zoom lenses would all be pretty awful -- every change in focal length would give huge amounts of CA. To combat that, elements are grouped. Instead of just the front element and second element, with one compensating for the CA introduced by the other, you'd have two groups of elements, each of which compensates for its own CA, and moving the groups relative to each other doesn't change the CA at all.

It's still not that simple though. It's physically impossible for a group of elements to completely compensate for CA. An element always bends blue light by some angle that's greater than angle at which it bends red light. At best, if you put the elements really close together, you can get the red and blue light traveling very close together and almost parallel, but still slightly separated. If you bend them back toward each other, they're only going to converge at one exact distance; at any other distance, you're going to end up with CA in one direction or the other.

As already noted, however, with a zoom lens, the distances involved must change. What the lens designer is normally going to do is try to minimize the worst case CA. Doing that is pretty easy (at least in theory): he looks at the range through which the rear element moves, and figures out the angle that'll produce convergence at exactly the middle of that range. This way he's splitting things, so it'll get CA in one direction as the rear element moves closer to the sensor, and in the other direction as it moves farther away. Of course, it's not really just the rear element though -- he has to look at the combination of all the movements of all the element groups (and account for the dispersion introduced by each, of course).

Once he's figure out the range, however, he usually minimizes the worst case by splitting the difference -- optimizing for roughly the middle of the range, so it gets a little worse in each direction. The exception is a lens that's expected to be used primarily at one end or the other. In this case, it can make sense to optimize for approximately the expected usage range, and live with the fact that the worst case is going to be worse than it would really have to be.

Of course, this is also looking at only one of the several factors important to a lens design -- the designer also has to take into account (at least) coma, astigmatism, vignetting, distortion, and spherical aberration -- not to mention a few minor details like size, weight, cost, and simply being able to manufacture a real lens that works the way he's designed it to.

Unfortunately I have also seen lenses where central focal-lengths are worst, so your assumption is not always correct.

Basically a zoom is made of moving optical elements and they have to move relative to each other to change the focal-length of the lens. Optical engineers are responsible for optimizing the performance throughout the zoom with a fixed set of parts in a fixed order. You can imagine this is a difficult process.

Zoom lens design, unlike prime (single fixed focal length) lens design, tends to be rather complex. With a prime lens, it is much easier to correct for optical aberrations like chromatic aberration, spherical aberration, distortion, etc., and so so with fewer lens elements. The fewer lens elements (individual glass lenses used in the construction of a complex camera lens), the better your image quality will generally be, since each piece of glass will affect the focusing of light.

Zoom lenses generally have more lens elements than prime lenses, sometimes considerably more. When it comes to the wider focal lengths, some zoom lenses are longer than their focal length and require a "retrofocal" group at the back. All of these extra lens elements each add to the optical aberrations, some correcting the aberrations of other lens elements. In a zoom lens, optical correction must be done in such a way that it produces the best overall quality throughout the zoom range, which usually means a compromise must be made somewhere (can't have your cake and eat it too.)

Zoom lenses usually have "sharper" points and "softer" points. It is not always at the extremes of the focal range...sometimes its right in the middle. Sometimes the compromise comes at the cost of image "edge" sharpness vs. "center" sharpness, which may be worse at one focal length than another. Either way, accommodating a variable focal range requires compromise due to necessary complexity.

Higher quality lenses will often use more advanced optics to correct aberrations, usually at considerable cost. A midrange lens may simply use more lenses to correct for aberrations and ignore how aberrations change throughout the focal range. A top grade professional lens will account for variability in aberrations, use advanced optics like high density glass, low dispersion glass, aspheric lens elements, fluorite lens elements, apochromatic lens elements, extra corrective groups, etc. to maintain the highest quality throughout the focal range of a zoom lens. Compromises must still be made relative to prime lenses, however the degree of compromise tends to be much less.

Lenses involve significant corrections for abnormalities. These abnormalities are known as aberrations. There are a variety of aberrations, some of the more common are spherical, astigmatism, chromatic, coma, barrel, pincushion, field curvature, and out of focus.

The more that you get away from the lens sweet spot, the more soft it will be. Changes of focal lengths, aperture, and focal distance all are influencers in the sweet spot. Thus changing any one of the 3 will degrade quality. If the lens is of a high enough quality, the degradation will barely be noticeable.

Not the answer you're looking for? Browse other questions tagged lens zoom optics or ask your own question.

15
Overlapping vs. Complementary lenses
12
Why buy an intentionally soft lens?
0
What is the EF 28 - 105 mm 1: 3.5-4.5 lens best for?
8
Can the sharpness of the lens be evaluated with no relation to the DSLR?
10
Is my Canon EF-S 15-85mm IS USM lens defective or par for course?
8
Are there any comparison photos of different lenses (with the same camera and scene)?
10
Why are 50mm no longer the default kit lens for prosumer SLRs?
3
Why are fixed-aperture lenses not more popular?
4
Seeming contradiction on wikipedia about rear nodal points and how the principal plane is related to focal length