Does my crop sensor camera actually turn my lenses into a longer focal length?

So, I mount a 200mm lens on my Canon 450D. It effectively becomes a 320mm lens. Is this the equivalent of 320mm on a full frame camera? That is, from what I've figured out I get an equivalent field of view but nothing I've read is indicating that I get the magnification to go along with it.

The lens does not actually turn into a different focal length, since that's a real, physical property of the optics that can't be changed without more optics. So from that point of view, the answer is a definitive no.

However, when you get to the question of is it effectively the same in terms of magnification, the answer is "pretty much, given some assumptions."

A key assumption is that you're printing at the same size. That means: you're increasing the magnification of the image from the smaller sensor. If you print at sizes different by the same ratio of the crop factor, you get exactly the same result as if you just took a full-frame photo, printed large, and then cropped out the middle.

"Roughly" comes in because, of course, the actual sensors won't be equivalent in image quality. (The crop-factor print may have larger resolution, but from denser photosites, depending on the technology generation used in each camera.)

Blowing up that cropped image — either from the full-frame cropped print, or from the cropped sensor — has two effects which are very like changing the focal length. And these two things are the most visible effects of changing focal length — field of view, as you've noted; and depth of field, which changes (almost) exactly as if you'd adjusted the f-stop by the amount of the crop.

If you've ever used a point and shoot camera with "digital zoom", that's what's actually going on. It's cropping the photo and then expanding it. From a practical point of view, zoom is indistinguishable from cropping. But of course, that raises the spectre of decreased image quality — we all know that digital zoom can be awful. The answer is simply that sensor technology is really very good, and amazing, excellent results can be produced at even large print sizes even with a 1.5 or 1.6× crop — but if you do want to go larger with your prints, eventually you need a larger sensor. And, equivalently, if you want to zoom in more, you can do that with more cropping, but eventually, you need actual higher-focal-length glass.

Note that this doesn't address macro shooting. I don't really do any of that, so I'll let someone else handle that aspect of the question — which I think is well-addressed here: Does a camera's crop factor apply to the magnification of macro shots?

The crop sensor does not change any property of the lens – but by seeing just the center of the image it makes it look like everything is multiplied by the crop factor.

The focal length does not change – but by looking only at the center of the image makes it look similar to what you get by using a longer lens.

The subject projection on the sensor is exactly the same size (lens magnification didn't change) but it takes a larger area of the image because the sensor is smaller.

The depth of field, as defined by the aperture, also does not change. The only reason it is larger (more in focus) than on a full frame sensor, is because of the cropping factor, the person must move backward (or zoom out) to achieve frame something the same within the image.

In other words, if you had a full frame body setup with a 50mm lens at F/1.8 aimed at a subject 2m away then replace the camera with a crop sensor body but use the same lens and position (2m), the depth of field will still be exactly the same, but you will see less of the image seen in the full frame body (crop). 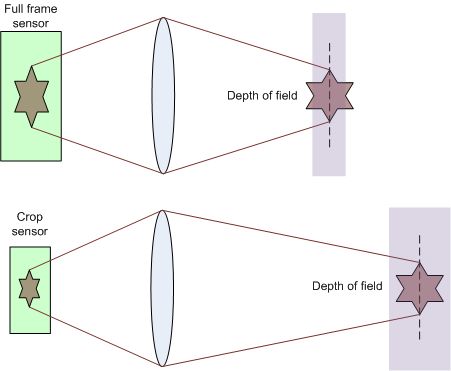 I once asked this and got many confusing answers, but in the end I understood it, and I will try to explain it as simply as I can:

If you understand (1) and (2), you will immediately understand that nothing has changed, not even Depth Of Field, not focal length, etc.

The size of the image projected on the sensor is the same in both cases.

But a smaller sensor with the same aspect ratio and same total number of pixels will have smaller pixels. So if you take a lens off say a 10 megapixel full-frame camera and put it on a 10 megapixel crop sensor camera (with the same settings, same distance to subject etc) the size in pixels of objects in the image will increase.

It should be noted that, if, for the sake of argument, both sensors in their original configuration had pixels butted against each other with no space between them, then when you enlarged the 1" sensor, the pixels would now have space between them in whatever amount was necessary to reach the 2" size.

This would make for a very pixelated, low quality image, much like people would due with dot matrix printers in days of old.

Another way to think of it is, we have all seen the pictures of the head of a pin with the preamble to our Constitution written on it, or a grain of rice with the Lord's prayers written on it.

So, imagine if you took that pin head and stretched the metal until it was the same size as the actual page of the preamble. While technically all the words would still be there, they would be illegible and would take quite a bit of visualization to even "see" the words. That same thing happens, to a much smaller extent, when you expand a cropped sensor version to the size of a full sensor capture. Thus, we now turn the conversation to apples and oranges because we aren't talking about the same thing.

Expand the full frame sensor by the same amount and it also takes a much more magnified look.

The important thing to remember is, the lens captures and transmits the same information irrespective of what is capturing its contents. However, the size of the image (magnification) depends on where you place the focal plane and the quality of the sensor at the focal plane distance.

So, if you took the same setup, removed the back of you camera and let the lens project to a white wall 10' behind the camera, your subject may be 20' tall. Now all you need to do is invent a sensor that can capture a 20' tall image.

So, as the previous person said, an APS-C sensor with 21MP and a full frame sensor with 21MP, you will have larger pixels on the FF and smaller on the cropped, or there will be more space between pixels (less dense) but the captured images will be identical and will only reflect their traits (quality) when changing sizes.

Effectively, a crop sensor camera does the following transformations:

where f is the focal length and N is the aperture number. These transformations, when applied, give the (1) same field of view, (2) same depth of field, (3) same background blur, (4) same noise given equivalent sensor technology, (5) same exposure.

If you forget to transform the aperture, you are forgetting two things:

Not the answer you're looking for? Browse other questions tagged focal-length crop-factor magnification or ask your own question.

4
50mm lens=75mm on DX camera?
2
EF-S lens focal length
2
Are film lenses effectively longer focal lengths on cropped-sensor DSLRs?
0
Why are crop lenses indicated with focal lengths they don't have?
2
How does "designed for APS-C" affect focal length?
0
Is it like an 18-55 DX lens on a DX body effectively equivalent to 27-82?
1
Crop Sensor Enhances Zoom?
1
About the 1.6x crop factor on a crop body
0
Actual Focal Length on APS-C cameras
1
Extra reach on a crop frame body?
See more linked questions

87
What is "angle of view" in photography?
6
Does using a lens adapter change focal length?
7
Do crop sensors on SLRs changes the depth and flatness of the objects as well? (in comparison to same focal length on full frame sensors)
4
Does wide angle equivalent in crop sensor skew image?
1
Equivalent focal length and aperture of 150mm medium format lens on a 35mm camera
3
Does being a Macro lens but on a shorter focal length affect taking a tight portrait photo?
8
How does crop factor affect perspective?