How much shift will I have using Canon tilt-shift lenses on a Hasselblad x1d with an adapter?

I am considering the x1d II, and already have Canon tilt shift lenses, 24 and 45mm, with image circles of 67 and 58mm, respectively.

By using, say, a Novoflex adapter, how many mm of shift would I lose with the x1d I or II sensor?

And what would the corresponding focal length be, approximatively?

With the two lenses in question, and assuming you want to preserve infinity focus by using the lenses' designed registration distance of 44mm:

Please note: The ratio of the sensor diagonal to the diameter of the image circle in the diagram is approximately 1.414:1, which would mean an image circle of about 78mm if the sensor diagonal is 55mm. (The sensor's aspect ratio is also 3:2 (1.5:1) instead of 4:3 (1.33:1), and the differences between Sw and Sh would be less with a more square sensor). Image circles of 58mm and 67mm, respectively, would be much smaller in relation to the sensor. 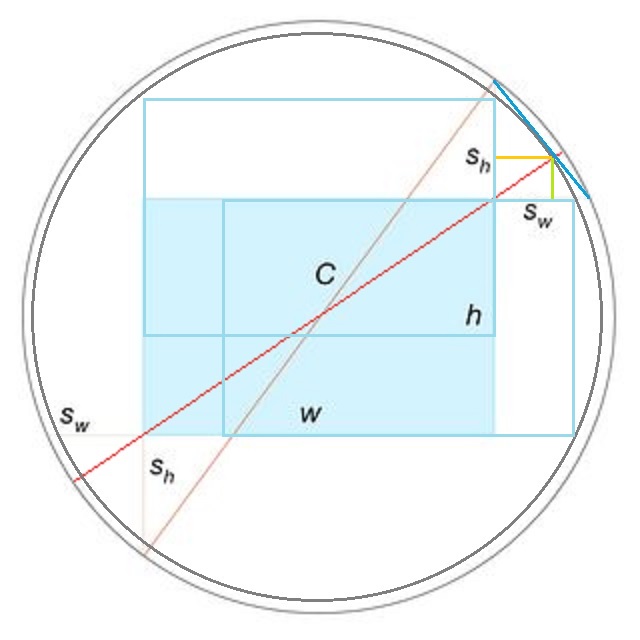 And what would the corresponding focal length be, approximately?

The focal length of either lens will not change, they'll still be 24mm and 45mm lenses. The larger sensor size will yield a wider angle of view than the same lenses would give on a 35mm/FF camera. Your "crop factor" would be roughly 0.8X, so using the 43.8 x 32.9 mm sensor would give similar diagonal angles of view as 19mm and 35mm lenses would give using a 35mm/FF camera. Keep in mind that the aspect ratio is different. The larger sensor is 4:3 or 1.333:1, while the smaller 35mm/FF sensor is 3:2 or 1.5:1, so you'd get slightly more vertical coverage and slightly less horizontal coverage with the Hasselblad after applying the "crop factor" than you would get with a 35mm/FF camera.

Here is the geometry to determine how much shift you theoretically have: 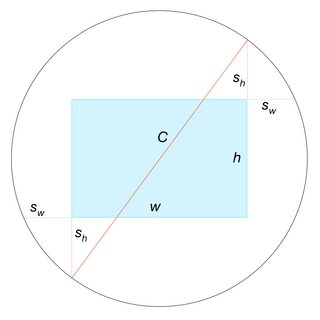 Solving the equations for sh and sw, respectively:

Not the answer you're looking for? Browse other questions tagged canon lens-adapter tilt-shift hasselblad or ask your own question.

10
How well do tilt-shift lenses work for nature/landscape photograhy?
4
What lenses can I use to build a DIY tilt/shift lens for a Nikon DX body?
19
Metering with a Tilt-Shift Lens
6
Why are there no autofocus tilt-shift lenses? or, why do tilt-shift movements appear to be incompatible with phase-detection autofocus?
1
Canon TS-E 24mm vs Hasselblad Tilt-Shift adapter
7
What are the techniques for taking portraits using a tilt shift lens?
2
Nikon D800E: How does Image Quality compare between PC-E Lenses or Medium Format lenses (via adapter) for Tilt/Shift?
4
What kind of lenses will work best with a tilt-shift adapter for a mirrorless camera?
2
How long does an image circle need to be, in order to be tilt/shift lens?
1
Does the Metabones adapter have light leaks during long exposures?