What is the difference between an unexposed film roll tin and a cookies box tin?

As I have a long roll of 35mm and I want to split into two I need some advice. Assuming that there is a standard for film storage, what is the difference between this: 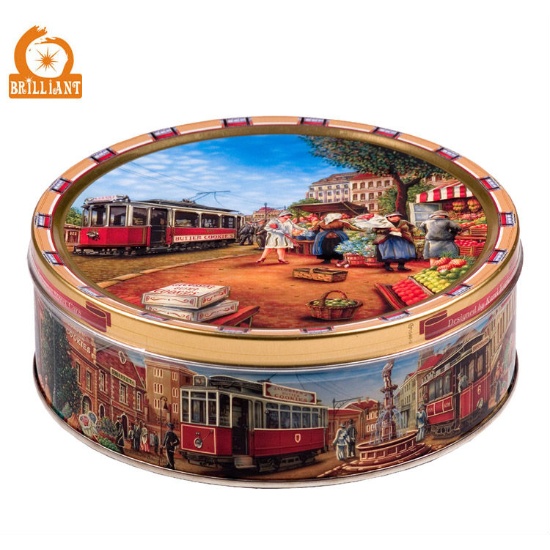 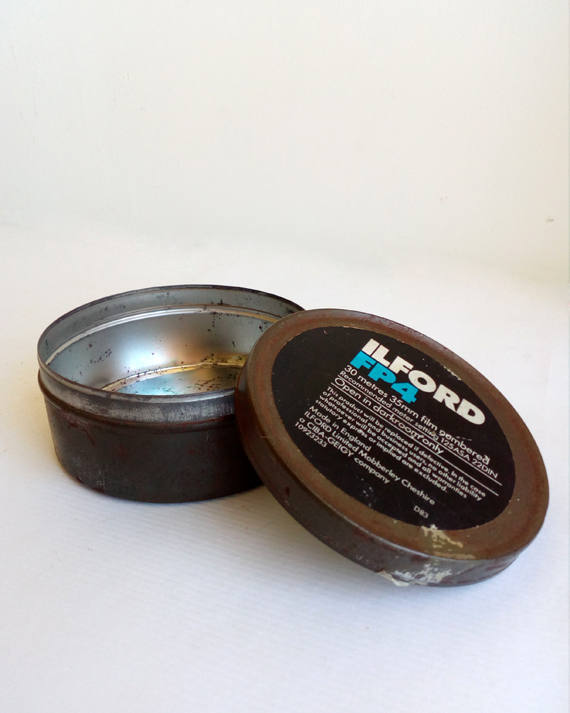 Can I keep my roll of unexposed film in a cookies tin (in black bag)?

Dark: Obvious. Can not have ANY light exposure or the film will be ruined in patches (or entirely). It's actually very hard to thoroughly ruin a roll of film from top/down or accidental exposure- maybe the top or bottom sprockets get ruined, or a couple of wraps of film from the roll (10, 15 feet) are ruined, but film is actually quite good at stopping accidental exposure unless it's unspooled. Keep it wrapped in a black bag (that is light AND IR opaque). Some plastics are totally transparent to IR and can slowly fog film (hence the metal can).

Cold: Heat speeds up reactions that 'fog' film. Fog is an accumulation of density that isn't related to intended exposure. Heat speeds up those reactions that accumulate charge density in 'holes', and heat can also cause 'holes' that have exposure to give up their captured electrons and the image can degrade. The latter is called 'latent image keeping', or LIK, and is something tested for in film production and development (or was at least). In one case Kodak released a film that crystalized in the freezer (professionals stored their developed negatives in freezers to prevent degradation), and among other solutions microwaving and heating with an iron were proposed.

Dry: Film has a gelatin that contains stabilizers and is intended for use in certain humidity levels. Too much and it'll stick, too little and it may build up a charge and spark or crack. So a desiccant pack to keep the humidity around the recommended amount is good.

Deep: Film is susceptible to ionizing radiation- yep those muons and other forms of terrestrial radiation will 'ruin' film in time. So don't keep it up in an airplane for years at a time, m'kay? The higher the ISO of the film the more easily it is damaged. Certain treatments with mercury or hydrogen can increase the sensitivity of the film and make it more easily fogged. I'd not recommend the last two cases.

Chemical Free: Film can be ruined by certain chemicals. Formaldehyde comes to mind, which was very common in the 70s and 80s in houses. The film itself (Kodak again) had certain binders in it to help limit the effects of this chemical, but chemical fog is a real issue and can ruin a roll faster than you'd expect. If that tin ever held 'sulfur' compounds, try not to use it.

Film is perishable. Store in a wrapping that protects the film from light. Wrap in several layers of aluminum foil. This will shield the film from light and humidity. A metal box will add an extra layer of protection. Store a freezer.

Handle the unwrapped film in a room known to be light proof. Pre-test the work area by sitting inside for 15 minutes. This allows time for your eyes to dark adapt. If at the end of the test period, If you see no light, proceed to handle the film.

Not the answer you're looking for? Browse other questions tagged film 35mm storage or ask your own question.

2
What is the difference between the Instax Mini 25 and the Cheki series?
3
My roll of film didn't rewind inside all the way
3
Difference between pushing b/w film and colour C41 film?
11
What is the rationale for having less than 36 frames in a single 35mm film roll?
3
Are overheated rolls of film (both exposed and unexposed) likely to be damaged?
9
What is the difference between medium format and 35mm amateur photography?
4
How long can a 35mm film be used/stored before it starts to lose its quality after expiry?
1
I bought a bag of 25 unopened boxes of KODAK Tri-X Pan 620 and 120 in the box film
3
Poorly scanned or poorly shot film roll?
16
Do I have to shoot a whole film roll on the same ISO?