Why does my multi-exposure film image appear darker than calculated?

I was experimenting a lot with multiple exposures on the same frame on film and noticed an unexpected behaviour. While this might very well have to do with my cameras shutter not working properly, it's been so consistent that I thought I'd ask the community if I am missing something.

I am using a Minolta camera from the 80s and I'm shooting on Fuji color reversal film. When I took two picture on one frame I noticed I could get away with taking two pictures at "normal settings" (as in: what I would set the camera to if I just took a single picture) on the same frame and it didn't really look awfully overexposed.

Now, when I took several pictures on one frame I figured I'd just double the shutter speed if I took two pictures or quadruple it to take four pictures and so on (I'd actually just multiply the film's iso by the number of exposures and set the camera to that value). Using that system, I noticed the more exposures I did on one frame the seemingly darker it became.

Am I missing something here? I thought evenly spreading exposure time over all exposures would be the same as having one exposure with the full time but maybe the film has some properties to it that defy that logic?

I'd be thankful for clarification.

Film has an exposure curve. I'm guessing that when you are combining many multiples the amount of light is insufficient to generate any real density (you are on the heel/bottom of the curve). For your simple division method to work you need to be w/in the linear response region. 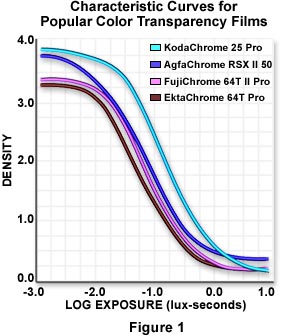 Anything past one second, whether in a single exposure or over several multiple exposures of the same piece of film, are subject to what is known as reciprocity failure. It's also called the Schwarzschild effect after the man who extensively studied it in the 1890s, Karl Schwarzschild.

The sensitivity of films at longer exposure times is not linear. This must usually be taken into account when exposing film for longer than one second. This can very significantly impact exposure times, and it varies by the specific film in question. The manufacturer of your film should be able to provide information regarding how much compensation is needed for longer exposures. If you are doing multiple exposures, then you need to add the total time of each exposure together when consulting the manufacturer's data sheets for your film.

Most film manufacturers publish data sheets for each of their films that outline development times for shooting the film at different speeds as well as for developing the film when it is shot at the advertised sensitivity. They also include data regarding exposures longer than about one second (for most films) that are affected by the Schwarzschild effect. Each film has different characteristics, and how much compensation must be made for long exposures can vary significantly from one film to the next.

From the Wikipedia article for reciprocity:

At very low light levels, film is less responsive. Light can be considered to be a stream of discrete photons, and a light-sensitive emulsion is composed of discrete light-sensitive grains, usually silver halide crystals. Each grain must absorb a certain number of photons in order for the light-driven reaction to occur and the latent image to form. In particular, if the surface of the silver halide crystal has a cluster of approximately four or more reduced silver atoms, resulting from absorption of a sufficient number of photons (usually a few dozen photons are required), it is rendered developable. At low light levels, i.e. few photons per unit time, photons impinge upon each grain relatively infrequently; if the four photons required arrive over a long enough interval, the partial change due to the first one or two is not stable enough to survive before enough photons arrive to make a permanent latent image center.

Not the answer you're looking for? Browse other questions tagged film multiple-exposure or ask your own question.

2
Why did my 35mm scans come out with this white grain?
1
Why did my night pictures turned out so foggy, light or too bright?

2
Film advance lever does not go all the way and shutter button locked
28
Why are these film photos brighter than digital photos taken at the same time with the same settings?
4
Weird artifacts when using Tmax 100 for black-and-white reversal processing
7
What exactly does it mean to say that a certain film or process 'is tolerant' or 'has latitude'?
3
Light leaks in RB67 film handling?
4
What's the actual process for making long exposures with an RB67 ProS and dual cable release?
4
Why orange color casting started to appear in my Polaroid B&W film several months after developing?
2
What could cause these spots on my scanned negatives?
2
Pinholes in 35 mm slides
1
Shooting mystery film found in 1930s camera