Is there an easy way to force chromatic aberration?

A couple of months ago I was playing with my camera and a magnifying glass and I noticed that this glass produced a very soft chromatic aberration. Although the effect was pretty cool, I couldn't focus too far from the lens. Here's an example: 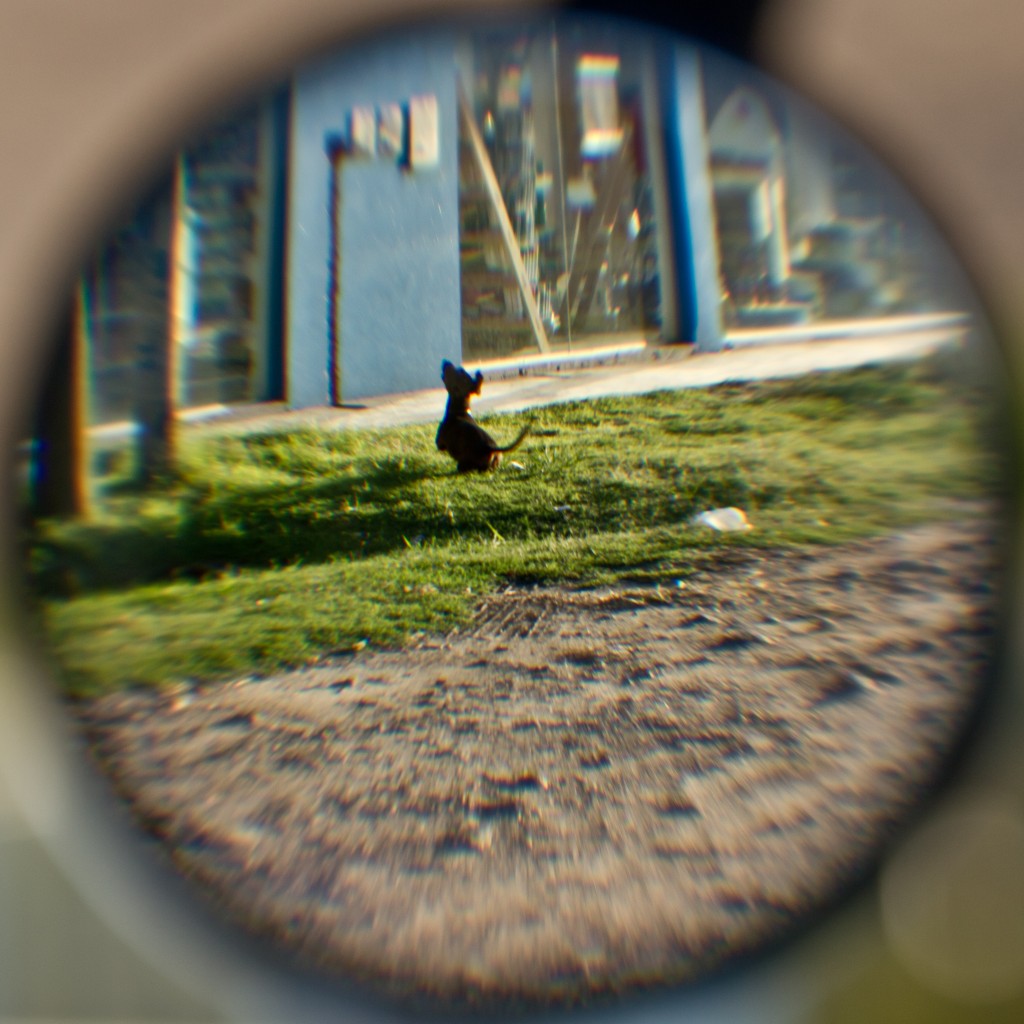 Maybe at this resolution the dog seems to be focused, but in the full picture you can notice that it isn't.

So, is there an easy way to produce chromatic aberration? I know that there are some Lensbaby optics that can do that, but I'm looking for something like DIY.

Just a random thought: Could I emulate it by shifting the color layers of the image? I mean, the image is composed by three different layers of color, if I offset them a few pixels, will that produce some CA?

I'm pretty sure that the colors of the photo will go nuts, but maybe there's a related solution.

I think the dog is in focus, but it's not sharp. And it's not sharp because a magnifying glass isn't corrected for any aberrations, chromatic or otherwise. In other words, it's a technically poor lens (though you're still welcome to have some fun with it, of course).

While all types of glass are dispersive, some are more dispersive than others. If you combine two lens elements made with different types of glass in the right way, one with a high dispersive index and the other with a low dispersive index, you produce an achromat, which reduces the chromatic aberration by bringing red light and blue light to the same focus. Pretty much any camera lens provides at least this level of correction; your magnifying glass does not. An achromat still has some residual chromatic aberration; for example, green light may come to a different focus than red and blue. Further correction produces an apochromatic lens.

If you swapped the glass type for the two elements of an achromat, it seems like you would end up with a system that exaggerates chromatic aberration. You might be able to source the required elements from an educational supplier like Edmund Scientific. Or you could just try to find a convex singlet (like your magnifying glass) made from a high-dispersion glass, which may be called "flint glass."

If you split your image into red, green and blue channels, and then:

This will reasonably accurately re-create some chromatic aberration.

I think the search phrase you're looking for is "DIY toy lens".

This will lead you to a number of interesting projects, including this one made from toy magnifying glasses like the one you were playing with. The basic construction is quite simple: an extension tube is used to mount a tube of cardboard to the camera, and the lenses mounted within that tube. That's pretty simple, and flexible enough that you could adapt the idea with lots of different possible improvements.

Other projects, like the fisheye tin-can lens use peephole lenses designed for looking out one's front door. That gives a different effect, but may also appeal to you since the results will be decidedly lo-fi.

You'll have more CA by using fast glass, i.e. where the ratio of focal length to diameter is smaller; for more chromatic aberrations, you'll want to avoid achromatic lenses. Along with CA, faster lens will also make image more misty (spheric aberrations); you can reduce that by stopping the lens down using an aperture disc (I cut mine out of a plastic binder). My first DIY lens was based on a 110mm f/1.8 magnifying glass bought from local market, CA was quite prominent.

I ordered glass for my second DIY lens (64mm f/1.7 achromatic, US $7 + $5 int'l shipping) from Surplus Shed - they have quite wide selection of lenses at affordable prices.

Find a handful of $10 yard sale grade teleconverters, preferrably designs with as few elements as possible (something like an Anker Duotelematic, NOT something like a Kenko MC7! Avoid single coated/uncoated ones though). Stack them behind a lens (best if the lens has good resolving power but strong CA already). The "worst" ones CA-wise nearest the lens, so the rest magnifies the effect maximally.

You are correct that you could simulate this in an editor by shifting the layers a bit, however since the amount of fringing grows as things are farther away you end up needing to slice and dice the image and shift different parts of the image different amounts. Also the corners of the lens tend to shift more than the center, so you would need to shift more out there as well. And also... since CA isn't side to side, it's radial inside to outside, you would need to shift different pixels in different directions based on where they are in the image.

Personally, if I were going to try to fake it in PS, I'd use a bit of motion blur instead of shifting pixels. Split it into color plates like you suggested, take the blue to the outside and the red to the inside. Probably copy the layers, apply the radial motion blur to the key items in the image, based on how close they are, then apply a bit more to the background, and finally apply a layer mask that hides most of the effect in the middle of the shot and none of it in the corners. You aren't likely to get an exact technical replication of what CA is going to looklike, but if you're looking for the artistic effect it presents, you'll get close.

Not the answer you're looking for? Browse other questions tagged optics diy chromatic-aberration lo-fi or ask your own question.

6
What is a good use for an old 35mm slide projector?
9
What is this red/blue effect called?