How accessible is gas hypersensitisation today?

Gas hypersensitisation, as you may know, is a method which was regularly used by astrophotographers. It included baking or soaking a film in a gas mixture, with this gas oftentimes being nitrogen.

As film photography has started to die off to make room for digital photography starting from the turn of the century, the demand for hypersensitised film has apparently significantly died down as well, since I am unable to find any of such films for sale.

This person appears to have set up his own hypersensitisation apparatus, but this seems to be for personal use only. 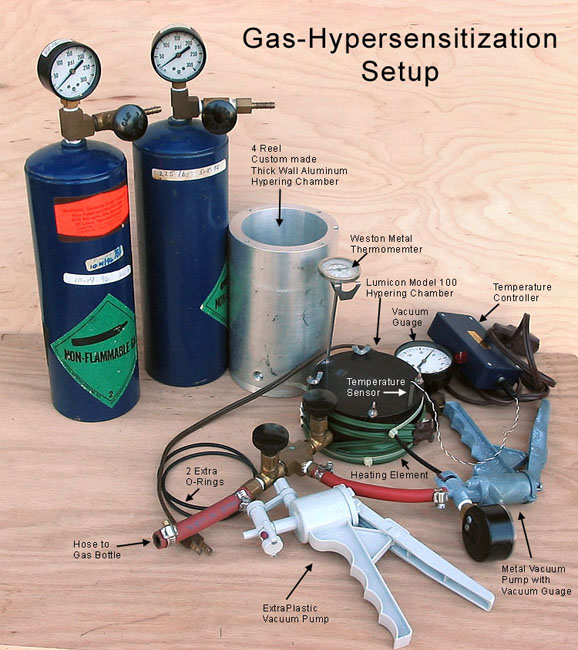 I wonder if there are still companies producing and selling gas-hypersensitised films, especially in (western) Europe. I am additionally interested in how much such films would cost, and how much they used to cost in the prime time of film photography.

I think half of this question can be half answered fairly easily (so this is a quarter of an answer).

People making very long exposures on film needed to hypersensitize their film to deal with reciprocity failure. Those people were almost exclusively astronomers. None of those people will be using film now, and certainly any observatory with the financial means to hypersensitize film will be spending their money on improving their digital sensors instead, so whatever processes and suppliers they had will no longer be supplying either hypersensitized film/plates or the equipment to make them.

So, no, there will be no companies producing hypersensitized film or the equipment to produce it, as the market has entirely vanished. [This is the bit of the answer I am confident in.]

If you wanted hypersensitized film now (presumably because you want to do retro astronomy, like the person who you reference) then the cost of it would be the cost of setting up your own system to hypersensitize film. If you're lucky you might be able to acquire equipment cheaply from observatories which used to do this.

I don't know what it used to cost: I imagine it was never cheap.

We used to experiment with a kind of gas hyper-sensitization using mercury. It wasn't the epitome of environmental concern but we were young, stupid, and irresponsible.

We would put a drop of mercury into a closed container with film and put it onto a room radiator to warm up and vapourize the mercury for varying amounts of time. This increased the effective speed which we then "rated" for shooting at night.

Alternatively, in a different direction, super-cooling of the film had its speed increases, too.

In the distant past, gas-hypersensitization was practiced by most every major astronomical observatory along with cold packs to freeze film. These methods increase the film's ISO mainly by mitigating reciprocity failure. This is the demon that robs film of its sensitivity when long exposure times are required. Most observatories had their own equipment along with a person who specialized in this art. Also, film manufacturers hypersensitized some types of their slower films to create a film with elevated ISO.

Not the answer you're looking for? Browse other questions tagged film astrophotography history or ask your own question.

20
How did they post process before Photoshop?
15
Is a Pentax K1000 relevant today, and how can I get the best use of it?
2
Is there a popular/canonical lens system out today?
14
How has the price of a roll of film developed over the last few decades?
0
Is B&W paper optimized for colour negatives available today?
3
How can I emulate 50's and 60's aircraft photos using film today?
5
How can daguerreotypes be both negative and positive?
8
Who were the Bauhaus photographers and what was their impact on commercial and artistic photography today?
12
How was film developed in the late 1920s?
21
Is space radiation a risk for space film photography, and how is this prevented?