I'm wondering why the ISO has seemingly changed the white balance and its effect on the skin tones of the groom especially, when the only differences here are ISO and shutter speed. Both images are automatic white balance, and evaluative metering. The lower ISO has better color accuracy in my opinion, but why? Any insights are appreciated. Thanks! 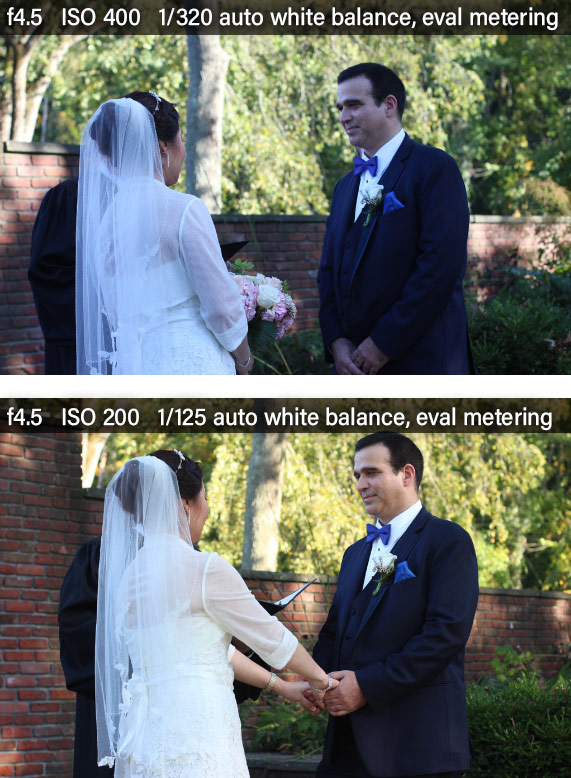 ISO and shutter duration are not the only thing that changed between these two frames.

In addition to framing and posture noted by ths, the lighting has also changed.

Look at the brick wall and the trees in the background. Parts that were in direct sunlight in the low ISO image are more shaded in the high ISO image. The clouds in the sky appear to have been moving and this affects the exact color of the natural light, some of which is direct and some of which is indirect through the clouds.

Even if cloud movement was not a significant contributing factor, the difference in framing changes the ratio of direct sunlight to shade in the frame and that influenced the camera's calculation of auto white balance.

ISO and speed aren't the only differences here. I count at least two others: posture of the subjects and framing.

The second picture has more skin (the arms) and less greenery on top. Both could have influenced the auto WB algorithm. That's what you get when you rely on automatics…

I think, what is happening here is what the photofinishing industry calls “subject failure”. You might think this jargon misses the mark, but I think it’s spot on.

Our high-speed photofinishing printers analyzed each frame of a color negative or slide. The gathered data was used to set the intensity and color tint of the exposing light. I am talking color photo paper, which was subsequently developed to make a finished photographic print. This technique custom color balances each film frame. Without this degree of sophistication, photo labs were forced to re-print a high percentage of film frames. These techniques evolved, and I believe white balance algorithms are likely spin-offs.

Anyway, the photofinishing printer was plagued by “subject failure”. The scan picked up irrelevant background colors, which by computer logic were considered relevant. A baby on green grass or red blanket overwhelmed the logic and the printer attempts to correct (white balance). The irrelevant expanse induces an error and the result is an off-color result. Baby on green grass becomes too magenta, baby on red blanket too cyan; the unwanted cast is the complementary color (opposite).

Subject failure can be mitigated by high-powered software and/or human intervention. This is likely too much to ask of a camera at this juncture of camera evolution.

When the camera is set to automatic anything it will generally treat each photo as a new shot location and evaluate the 'automatic' settings you have chosen on each fire. I've found higher ISO to contribute to more rich colors using a 5D, but it is so insignificant most people would not notice it.

If you shot this in RAW you could adjust the white balance to whatever you want and push it across all your photos in this sequence.

In the future stick with a semi-automatic mode for things you want auto on. Choose your priority to be shutter priority, aperture priority, although this doesn't exist that I know of yet ISO priority. White balance should be manual in nearly all cases IMO.

Great question, made me think that the manufacturers could offer a quick image recognition or location based 'automatic' that would make smaller variations in settings when a shooter is not changing location or sequence or shots are fired in short intervals.

Not the answer you're looking for? Browse other questions tagged white-balance iso comparison or ask your own question.

4
Are scene modes, white balance, color tones, and similar just post-processing effects?
10
Why are the colors so different in these two photos from different cameras even though I set white balance to the same temperature in Lightroom?
3
How do I warm the background color but keep natural color in the subject?
3
How to deal with shots at night with different kinds of light from different sources?
10
Are paler raw images normal for a newer sensor with higher dynamic range?
1
How to shoot thinner light trails using an iphone app
3
concert lighting difficulty with blue lighting - how to fix?
1
Why do pure colors (red/green/blue) become a mixture of colors when converting raw?
1
Why does temperature in Lightroom go from blue to yellow instead of orange to bright blue?