Recently I experimented with using shutter-priority ("Tv" on my Canon DSLR) for images shot from my kayak, because movement is a constant factor in that situation (even if there's no wind, there's always a bit of current pushing me along). I started off with Auto ISO but quickly realized I needed to set the ISO higher to get enough depth of field, since the camera was otherwise going to use the lowest ISO available. In reviewing the images, I'm puzzled about how the camera selected the aperture. Over and over again, I see two images in a row, taken in the same light with almost the same composition, having different apertures - sometimes wildly different. Here's an example, with 1 1/3 F-stops difference, both shot at 100 ISO and 1/200 sec. 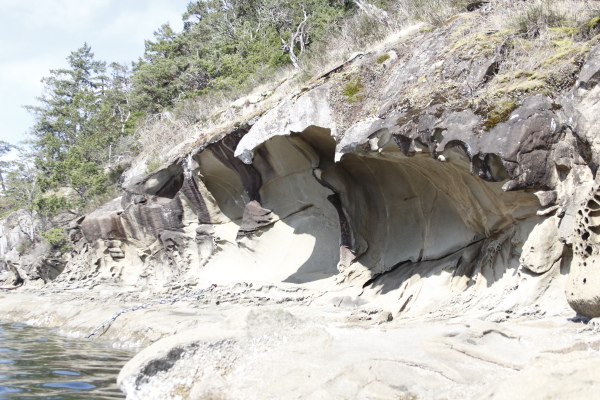 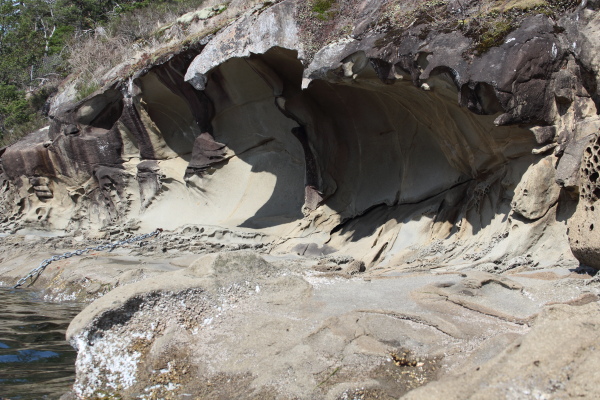 What is causing such a difference?

Metering was "partial" (Canon) for all of them. Light conditions were bright with a few clouds but mostly clear. I am used to using a dSLR in a kayak - the difference this time was I was trying TV (shutter-priority) rather than on M or AV as I've used in the past.

The camera can be set to lock the exposure in auto modes using different buttons, but a system default is to lock in the exposure at the time you hold the shutter release half way down. So, you'd get to where you want to take a shot, go halfway down, the autofocus and exposure would lock in, and then you'd take the shot.

Since you were using partial metering in a scene that was dramatically different between shaded area and unshaded, my guess is that your bobbing up and down in a kayak caused you to meter mostly in the shade for one frame and mostly in the sun for the other.

You probably locked the exposure while the meter was located here on this frame: 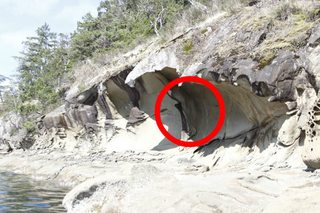 and probably locked in while metering here on the other: 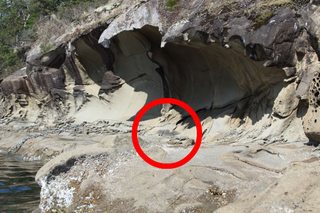 Subtle differences for sure, but enough to cause a big exposure calculation change.

For a scene like this, it's most important not to blow the highlights. If you shot RAW, it actually appears that your brighter shot may be the better of the two in the end, as you can tone down the exposure in post (assuming the highlights are salvageable).

If you only get one shot at the image (like kayaking down a river), then I'd tend to use evaluative or center weighted average, making sure to meter off averages in the scene, not the brightest or darkest points.

Also, there are custom functions that allow you to decouple the exposure lock and autofocus from the shutter release. I'm personally a fan of back-button focus and the shutter release used as exposure lock, but there are other options. I'd advise doing this so that you can figure out where to point your camera to get a good meter reading for the scene using a mode you are comfortable with, lock that in, and then recompose and focus and shoot.

If an appropriate aperture value is available, the camera will use that aperture, along with your selected ISO and Tv, to take the picture.

If an aperture value needed to give the desired exposure value is not available , one of several things may happen depending upon the camera in question and the state of certain user selectable settings.

For instance, with your selection of ISO 100 and shutter duration of 1/1000 second, if the camera wants an aperture of f/1.4 but your lens' maximum aperture is f/3.5, the following scenarios are possible:

In reviewing the images, I'm puzzled about how the camera selected the aperture. Over and over again, I see two images in a row, taken in the same light with almost the same composition, having different apertures - sometimes wildly different. Why is this? 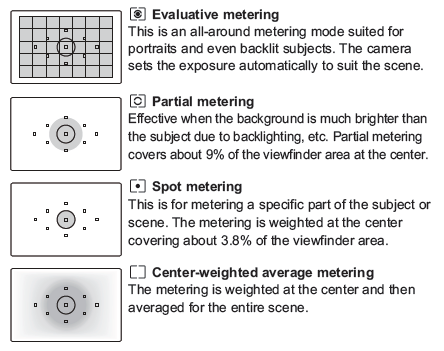 The gray areas in each "viewfinder" are what is used to measure how much light is in a scene. With center-weighted averaging, the darker areas are given more weight than the lighter areas. For 'Spot' and 'Partial' metering the active areas shown in grey are given the same weight and the rest of the frame is ignored.

'Evaluative' is a bit different. In this metering mode, the camera attempts to identify what type of scene the camera is being pointed at and then adjust metering based on the result. The readings over the entire light meter are compared to a "library" of different scenarios and the instructions for the one that best matches the current scene are used.

In early implementations using monochromatic light meters back during the film days, the first evaluative metering systems (Nikon calls in "Matrix" metering, other makers have different names for it) were fairly simplistic. For instance, if the upper 1/3 of the scene was very bright and the lower 2/3 was not as bright, the camera might be programmed to identify this as a "landscape" scene and expose for the lower two-thirds (2/3) while allowing the sky in the upper one-third (1/3) to blow out. If the upper two-thirds (2/3) was very bright and the lower one-third 91/3) was darker, the camera might be programmed to expose for the sky instead, and leave the landscape in the lower one-third (1/3) very dark. This would have been based on an assumption by the programmers that the part of the scene the photographer wished to expose properly was the part that took up more of the frame.

With modern color based light meters (in DSLRs with an RGB+IR meter, this is a low resolution color imaging sensor located in the prism area of the viewfinder - with mirrorless cameras it is the main imaging sensor) and an extensive "library" of different scenarios, cameras are getting better and better at "guessing" what kind of scene is in the frame and what the photographer wants to be "properly" exposed as a mid-tone.

With 'Partial' metering only about 10% of the total field of view is measured for brightness. The percentage can be a little lower or a little higher depending on the specific camera model, but it is rarely less than about 6-7% and rarely more than about 12-14% with Canon cameras. Whatever is in the rest of the frame is ignored by the light meter, only the center circle is metered.

When taking pictures on the water with the sun shining brightly, reflections of the sun off the water can dramatically affect metering. As the water moves and the angles between the sun, the water, and the camera are constantly changing the amount of brightness in any particular small area can vary wildly.

Update following addition of example image to the question:

The two examples added to the question show center areas that are roughly the same brightness in the actual scene. It appears exposure was locked prior to the camera being moved to the final composition used.

There are three possibilities for locking exposure prior to fully pressing the shutter button in 'Partial' metering mode:

The 'AE Lock' button by default is set to lock exposure until the photo is taken or metering times out, typically about 5 seconds after you take your finger off the shutter button.

With some EOS camera models, the 'AE Lock' button (or any other button mapped to perform the 'AE Lock' function) can be modified to act as a "toggle switch" that locks exposure when first pressed and does not unlock exposure again until the 'AE Lock' button is pressed a second time, regardless of how many frames are captured or how long metering has been inactive. Be very careful if you select this option while shooting in a "semi-automatic" exposure mode (P, TV, or Av)! If you press it once and leave it on, every picture you take will use the initial exposure settings that you locked in, even if the camera goes into 'standby mode' for several minutes. Turning the camera off with the 'On/Off' switch will clear any locked exposure values.

For cameras that use the 'Shutter/AE Lock Button' menu option, the following from the EOS Rebel T3i/EOS 600D Instruction Manual (p.256) is typical: 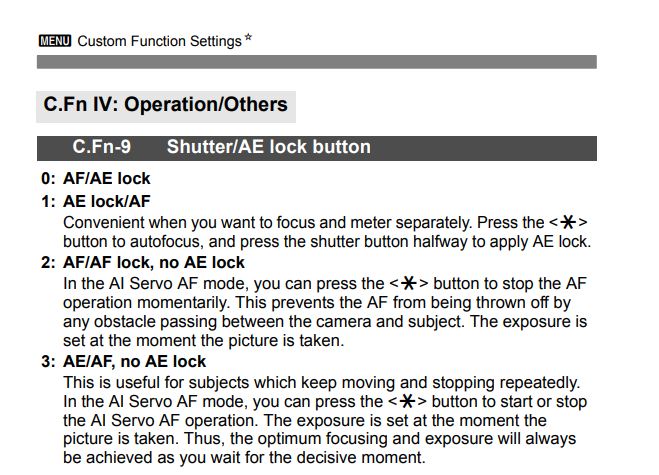 Under each of the options, the behavior described to the left of the slash (/) is assigned to the shutter half press and the behavior described to the right of the slash (/) is assigned to the 'AE Lock' button. Exposure will only lock upon a shutter half-press in 'Partial' metering mode if '1: AE Lock/AF' is selected. Note: in such a case, half pressing the shutter button will not initiate AF, you'll need to press the 'AE Lock' button that has been remapped to be an 'AF ON' button to use autofocus.

For EOS cameras that use the 'Custom Controls' menu, the following from the EOS 7D Instruction manual is typical: 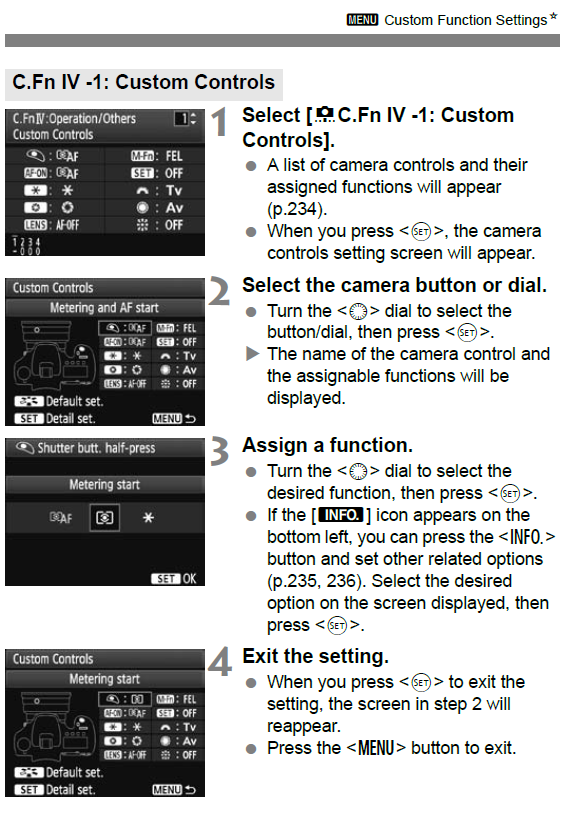 The camera will only lock exposure in 'Partial' metering mode upon a shutter half-press if the third option in Step 3, 'AE Lock' represented by the six starred asterisk, is selected.

Not the answer you're looking for? Browse other questions tagged exposure metering spot-metering or ask your own question.

16
How do DSLRs figure out what aperture to select in P mode?

24
Are there general rules for selecting the correct shutter speed and ISO in manual mode?
4
Why does my Canon 60D sometimes lengthen exposure when using the flash?
9
Is it usual that a narrow aperture gives a darker picture in aperture priority mode?
3
Why is actual exposure changing as I go from one extreme to the other in aperture priority mode?
0
Does Av mode apply any in-camera software push-pull (Canon 6D)?
1
Does in-camera metering affect anything but the meter in manual mode?
3
Why did the shutter speed increase when I raised ISO and lowered exposure compensation in Aperture Priority mode?
10
Am I wrong to judge my exposure using my smartphone?
9
Is the white balance wrong in these field poppy pictures?
6
Canon 70D often overexposing or underexposing shots